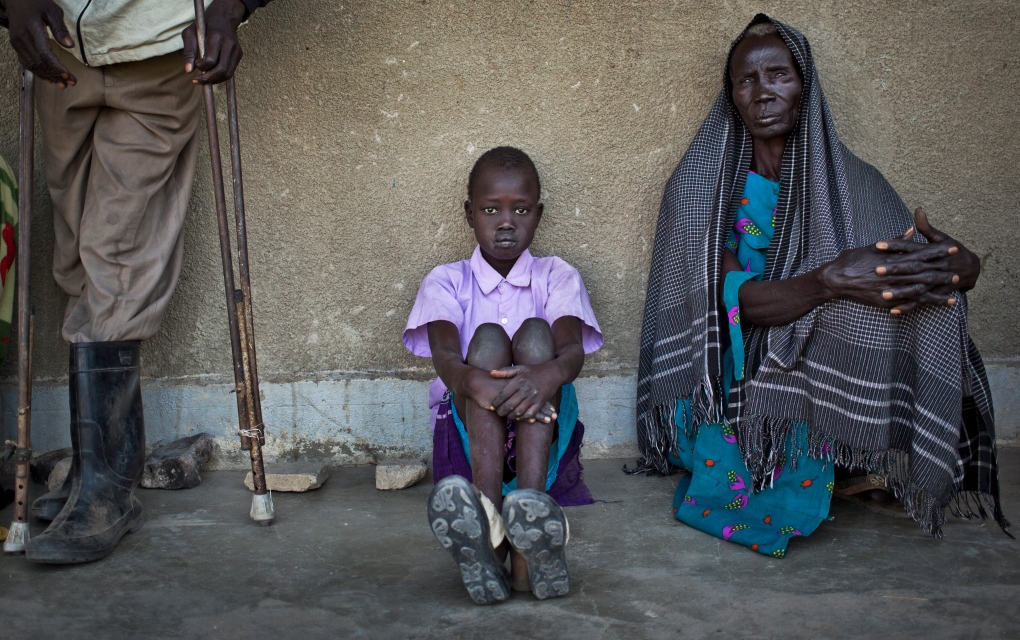 In this file photo, people displaced by the fighting between government and rebel forces in Bor, queue for medical care at a clinic run by Medecins Sans Frontieres (Doctors Without Borders) set up in a school building in the town of Awerial, South Sudan on Thursday, Jan. 2, 2014. (AP / Ben Curtis)

NAIROBI, Kenya -- The death tolls are huge and the individual incidents gruesome. One estimate says nearly 10,000 people have been killed in South Sudan in a month of warfare, while in neighbouring Central African Republic combatants in Muslim-vs.-Christian battles have beheaded children.

Sub-Saharan Africa has seen a very violent start to 2014, with raging conflicts in South Sudan and Central African Republic, as well as continued violence in Congo, and attacks in Somalia and Kenya.

Compared to decades past, Africa and its people are suffering from fewer conflicts today, but several recent outbreaks of violence are cause for concern, said J. Peter Pham, director of the Washington-based think-tank Africa Center at the Atlantic Council. The conflicts also lack strong international peacekeeping, he said.

"Peacekeeping in Africa, whether under the formal auspices of the United Nations or those of the African Union, suffers today from the same two limitations which they have been burdened with since the very first U.N. peacekeeping mission, the 1960-1964 operation in the Congo (ONUC), namely lack of political will resulting in a weak mandate and lack of adequate forces," he wrote by email.

The conflict that broke out in South Sudan on Dec. 15 saw violence radiate across the country as ethnic groups targeted each other. Shortly afterward Uganda dispatched troops and military equipment to aid South Sudan's central government from breakaway units of that country's military.

Casie Copeland, South Sudan analyst for the International Crisis Group, said violence in Africa tends to involve other countries and noted a "long history of regional involvement in African conflicts."

The U.N. Security Council on Friday, however, "strongly discouraged external intervention that would exacerbate the military and political tensions." The U.N. has said more than 1,000 people have died in the South Sudan conflict. But Copeland, after speaking to U.N. workers, aid actors, government officials and combatants, estimates nearly 10,000 have died.

Civilians in the Central African Republic -- a country where violence pits Muslims against Christians -- have suffered terribly since armed rebels overthrew the president in March 2013. The mostly Muslim fighters were blamed for scores of atrocities after taking power, and inter-communal violence exploded last month leaving more than 1,000 dead in a matter of days.

The U.N. children's agency UNICEF says that two children have been beheaded, and that "unprecedented levels of violence" are being carried out on children. An estimated 935,000 people have been uprooted throughout the country. Thousands of French troops and regional African peacekeepers are trying to temper the mob violence.

The country's president, Michel Djotodia, the rebel leader who seized control of the country, agreed to resign Friday along with his prime minister. The resignations could create an even greater power vacuum in a land with a history of coups and dictatorship. Djotodia had solidified his power with the help of mercenary fighters from Chad and Sudan.

John Prendergast, co-founder of the D.C.-based activist group the Enough Project, told a panel this past week at the Brookings Institution discussing Africa's greatest challenges in 2014 that international and regional conflict management systems must stop addressing conflicts in isolation, but rather deal with them as integrated conflict systems.

That includes adopting comprehensive peace processes and understanding long-term drivers of conflict in negotiations, he said.

Al-Qaeda-linked militants in Somalia, long one of the continent's most violent countries, detonated two car bombs on New Year's Day, killing at least a half dozen people. Neighboring Kenya, which has forces in Somalia, was hit with a grenade attack the next day on a coastal bar and nightclub, wounding 10 people. Kenya on Friday announced a military operation in Somalia it said killed 30 militants.

Kenya has troops in Somalia, as does Uganda. But Pham argues that the continent's conflicts are not receiving enough international peacekeepers. He notes that the U.N. Security Council, before the recent South Sudan violence, had been asking if peacekeeping numbers there could be reduced.

Since the outbreak of violence in South Sudan, the Security Council reversed course and increased troop numbers from 7,000 to 12,500.

"Not only is there a dearth of political will and the lack of an adequate mandate, for all the talk of 'African solutions to African problems,' the fact remains that there are inadequate investments of the right kind in the security sector in Africa so that when crises erupt, one is left to rob Peter to pay Paul," Pham said. "Blue-helmeted forces are having to be shifted from other missions to beef up (South Sudan's U.N. mission) today, just as French and Chadian troops were moved from Mali to the CAR just last month."