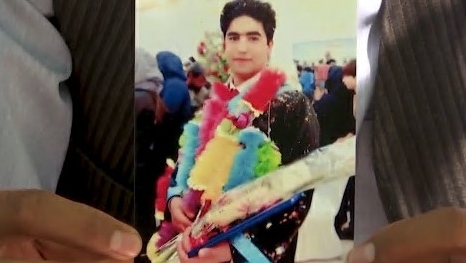 Fida Mohammed, a dentist, is pictured in this video screengrab. The twenty-four-year-old was last seen clinging to the undercarriage of a C-17 Globemaster III aircraft. He was among a group of Afghans who clung to the side of the plane as it took off from Kabul airport.

DOHA/TORONTO -- The C-17 Globemaster III military transport aircraft had just landed in Kabul when it was mobbed by hundreds of Afghans. An enormous crowd could be seen running alongside the slow-moving plane, with at least a dozen people jumping dangerously onto the plane’s wheel wells and sides, clinging on as it taxied down the runway.

It was mid-August and the Taliban had just seized control of the country. Many civilians had gathered at the airport, frantic to escape. It was a scene that captured the desperation of Afghans and the chaotic end to the U.S. war in Afghanistan.

The American plane had barely touched down when the crew made a hasty decision to take off again without unloading its cargo amid concerns over the rapidly deteriorating security situation around the plane.

At least two young Afghans were seen falling to their deaths from high above after the plane was already airborne. A third had been crushed under the tires of the 128,00 kg aircraft.

The dramatic and harrowing scene at the Kabul airport was captured in video clips -- including a selfie -- widely shared online, but how many ultimately died chasing the U.S. military plane is unknown. More than a month later, much of what happened that day remains unclear, but at least one family is looking for justice.

Among the dead is 24-year-old Fida Mohammed, a dentist who was last seen clinging to the undercarriage. His father is broken with grief and bewilderment over what his son was doing.

The father says Mohammed was his eldest son and he wants justice from the U.S.

Zaki Anwari was also among the dead. A promising star on Afghanistan's national youth football team, Anwari was knocked from the side during the madness on the tarmac and caught under the wheels.

The C-17 was impounded and an investigation underway, but the complete results have yet to be released.

“In addition to online videos and press reports of people falling from the aircraft on departure, human remains were discovered in the wheel well of the C-17 after it landed at al-Udeid air base, Qatar,” the Department of the Air Force Office of Special Investigations (OSI) said in a statement on August 17.