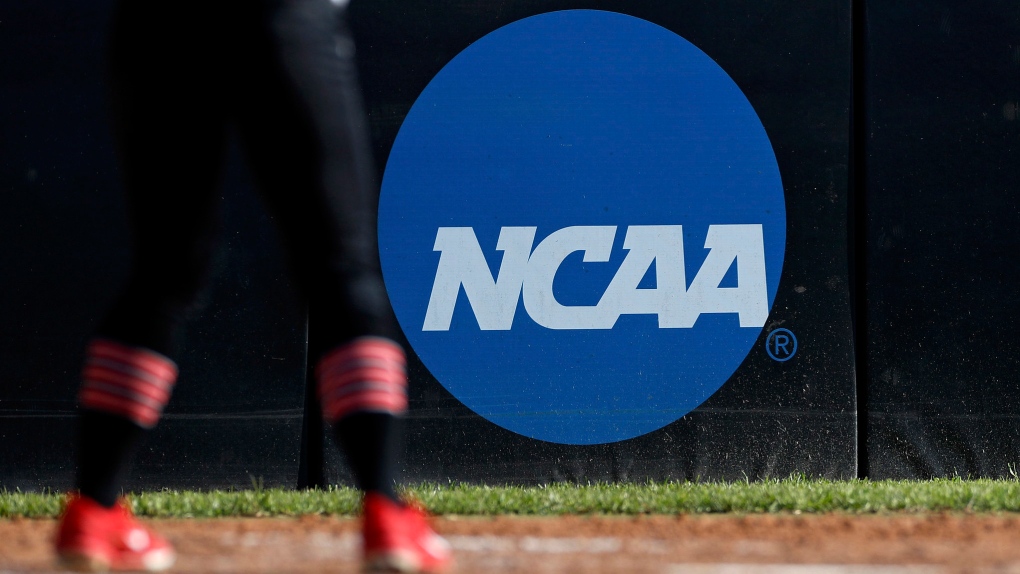 FILE - In this April 19, 2019, file photo, an athlete stands near a NCAA logo during a softball game in Beaumont, Texas. (AP Photo/Aaron M. Sprecher, File)

Athletes, coaches and advocates are calling on the NCAA to act in response to state laws banning transgender athletes from competing in organized sports.

"Simply put, trans inclusion makes our sports, our teams and our communities stronger," said Minnesota Lynx coach Cheryl Reeve, who was among those speaking out.

Reeve pointed out Friday that the real threat to women's sports is the lack of investment, resources and coaching opportunities, as well as pay disparity.

The NCAA, which has had a transgender inclusion policy since 2011, requires states that host NCAA championships to provide an environment that is "safe, healthy and free of discrimination." The organization has said it is monitoring the recent wave of proposed bills and laws enacted across the country that impact transgender student-athletes.

Conservative lawmakers in at least 28 states have introduced legislation to ban or limit transgender athletes from competing on teams or sports that align with their gender identity. Laws banning transgender women and girls from participating in organized sports have been signed in Idaho, Mississippi, Tennessee and Arkansas.

Proponents of the legislation say the rules are needed to prevent biological males from dominating women's sports. However, NCAA rules require transgender women to take hormone-suppressing drugs for a year before competing.

"These bills are nothing more than a co-ordinated effort by anti-LGBTQ extremists, spreading fear and misinformation about transgender people in order to score cheap political points. These bills are not only spurious, they are dangerous to transgender athletes and trans youth across the nation. And we are engaging with organizations and individuals who value fairness, equity and inclusion, to speak out and take action," David said.

In a letter to the Human Rights Campaign last week, NCAA President Mark Emmert affirmed the organization's commitment to diversity and inclusion.

"It is our clear expectation that all NCAA student-athletes will be welcomed, treated with respect, and have nondiscriminatory participation wherever they compete," Emmert wrote. "We are committed to upholding these principles and will continue to assess emerging laws to ensure student-athletes have fair opportunities."

Emmert also asserted that NCAA champion host sites must "demonstrate how they will provide an environment that is safe, healthy, and free of discrimination."

In 2016, the NCAA moved championships from North Carolina in response to HB2, the so-called "bathroom bill" that sought to ban transgender people from using restrooms consistent with their gender identity. The law was later partially repealed.

David said Emmert's letter was appreciated, but advocates "are asking the NCAA to do more and to use the power of their visibility to reaffirm and support transgender and non-binary athletes across the nation."

Anne Lieberman, director of policy and programs at Athlete Ally, a national non-profit that advocates for LGBTQ athletes, was also among those who called on the NCAA to act.

"The time has passed for simply monitoring the situation. If you say nothing, even though you have clear policies and practices that support inclusion of trans student-athletes, you are implicitly supporting these bills," Lieberman said. "I want every young person in this country to be able to live without fear and to play sports as they truly are."