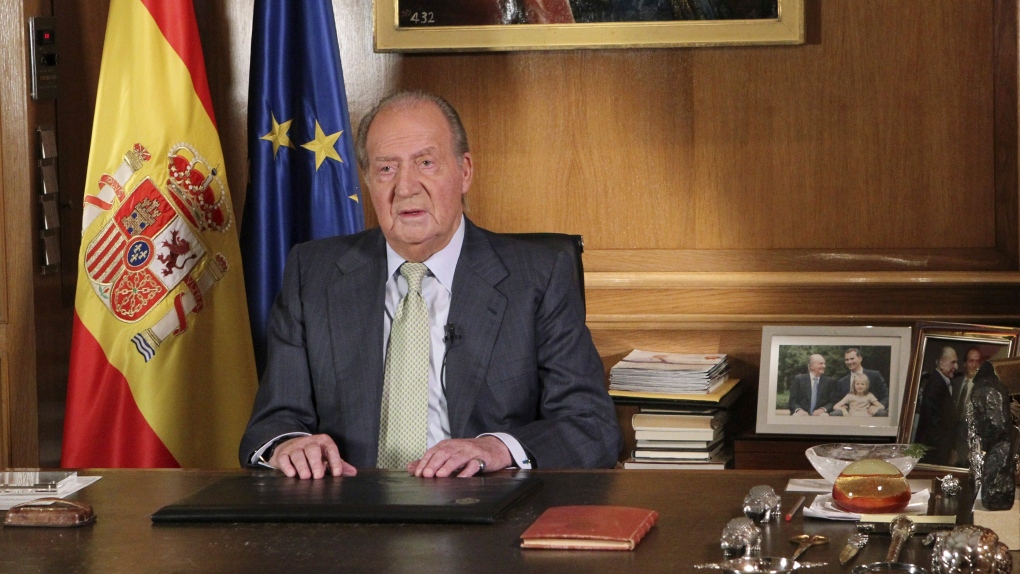 MADRID -- Speculation over the whereabouts and future of former monarch Juan Carlos gripped Spain on Tuesday, a day after the man who served as king for almost four decades announced he was leaving the country for an unspecified destination amid a growing financial scandal.

In a letter published on the royal family's website on Monday, Juan Carlos told his son King Felipe VI he was moving outside Spain due to the "public repercussions of certain episodes of my past private life."

Juan Carlos, 82, is the target of official investigations in Spain and Switzerland, into possible financial wrongdoing.

His bombshell announcement took most Spaniards by surprise. Neither the royal family nor the government disclosed where the former king was going. Juan Carlos appeared to be physically and figuratively distancing himself from the rest of the family to avoid causing any further damage to its reputation.

Daily newspaper ABC reported Tuesday that Juan Carlos left Spain on Sunday and flew via Porto, in neighbouring Portugal, to the Dominican Republic. The daily La Vanguardia also said he was in the Caribbean country, but only temporarily.

But El Confidencial newspaper reported that Juan Carlos could still be in Portugal, where he spent part of his childhood, or in France or Italy, where he has family and friends.

Spanish Prime Minister Pedro Sanchez said Tuesday he had no information on Juan Carlos' whereabouts. He declined to say whether he knew about the royal plans before they were announced, saying relations between the prime minister and the head of state are "discreet and confidential."

He added that during the coronavirus pandemic, which hit Spain particularly hard, "Spain needs stability and robust institutions."

Juan Carlos assumed the throne in November 1975 as King Juan Carlos I, and is credited with helping Spain peacefully restore democracy after the death of dictator Francisco Franco that year. But marred by scandals in the later years of his reign, Juan Carlos in 2014 abdicated in favour of his son Felipe, losing the immunity from prosecution the Spanish Constitution grants to the head of state.

The royal household appears to be trying to free Felipe from having close to him an uncomfortable figure who might tarnish the crown's prestige, University of Barcelona constitutional law professor Xavier Arbos said. Choosing August, when many people are on vacation, for the announcement about Juan Carlos's departure was convenient timing, he told The Associated Press.

Arbos saw the former king's absence from Spain posing no problem for prosecutors. Juan Carlos has said he will continue to co-operate in the investigation, llaborate and there are no warrants out for his arrest, the professor said.

The scandals swirling around Juan Carlos have provided ammunition for those wanting to abolish the monarchy.

The left-wing party that is the junior partner in Spain's coalition government, Unidas Podemos, promptly called for a public debate on switching to a republic government system.

"There is no reason at all to keep supporting a monarchy which doesn't possess minimum ethical standards," the party said in a statement late Monday.

But the Socialist party, which leads the government under Sanchez, has given no sign of pursuing that path and declared its support for Felipe. Even so, the prime minister recently said he found the developments about Juan Carlos "disturbing."

In downtown Madrid, opinions were divided.

"I think it is really bad that we let him go," insurance worker Sara Fernandez, 38, said. "He should have to stay here, return the money and do prison time, like all Spaniards when you break the law."

But janitor Mar Verdugo, 55, urged caution. "We are judging him without any evidence, so when there is a sentence we will see if he has done right or wrong," she said.

Juan Carlos's lawyer, Javier Sanchez-Junco Mans, said in an emailed statement that the former king had asked him to make clear that even though he will be outside Spain he intends to be available to co-operate with the investigation.

Juan Carlos cannot be tried for alleged crimes he committed while he was on the throne due to royal immunity. However, he could potentially stand trial for acts committed after 2014.

A statement from Spain's general prosecutor's office in June said it was investigating whether Juan Carlos received millions of dollars in kickbacks from Saudi Arabia during the construction of a high-speed railway there by a Spanish consortium.

Since then, Spanish media outlets have published damaging testimony from a separate Swiss investigation into millions of euros (dollars) that were allegedly given to Juan Carlos by Saudi Arabia's late King Abdullah.

Juan Carlos allegedly then transferred a large amount to a former companion in what investigators are considering as a possible attempt to hide the money from authorities.

The companion, Corinna Larsen, is a Danish-German businesswoman long linked by Spanish media to the former king. Spanish prosecutors have asked her to provide testimony in the case in September via videolink from London.