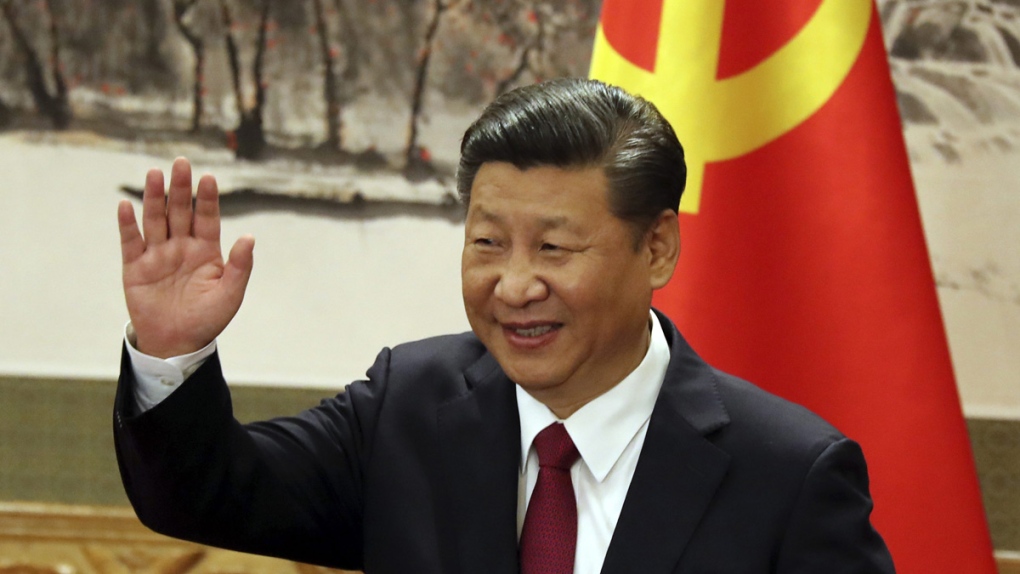 Chinese President Xi Jinping waves during a press event to introduce the new members of the Chinese Politburo in Beijing's Great Hall of the People, on Oct 25, 2017. (Ng Han Guan / AP)

BEIJING -- China's Communist Party leader Xi Jinping on Wednesday unveiled the new lineup of six men who will assist him as he embarks on a second five-year term centred on protecting and projecting the party's interests at home and abroad. Among them was a notable absence: an obvious successor to Xi, raising questions over how long he intends to rule.

As expected, Xi was given a renewed mandate following the first meeting Wednesday of the new Central Committee that was elected at the party's twice-a-decade national congress.

"We will mobilize the whole party and the whole country in a resolute push to deliver on our pledge and eradicate poverty in China," Xi, China's president, said in comments to reporters at a brief ceremony at the Great Hall of the People.

The new leaders will face challenges that include reining burgeoning levels of debt, managing trade tensions with the U.S. and Europe, preventing war over North Korea's nuclear program and navigating ties with Southeast Asian nations wary of Beijing's influence.

Five members of the new seven-strong Politburo Standing Committee Xi introduced were newly appointed Wednesday. Going by the party's norms on retirement ages, none of them are deemed suitable to succeed the 64-year-old Xi as party leader after his second five-year term.

The absence of an obvious successor pointed to Xi's longer-term ambitions, said Joseph Fewsmith, an expert on Chinese politics at Boston University.

"It suggests that Xi will likely serve a third term, and that he is likely to name his own successor," Fewsmith said. "We have not seen that for two decades."

In contrast, before Xi took power in 2012, he had been in the Standing Committee for five years and Xi's predecessor Hu Jintao had a seat on the body for 10 years before becoming party leader. Under recent party precedent, party leaders have served just two five-year terms.

The party had already elevated Xi's status on Tuesday at its closing session by inserting his name and dogma into the party's constitution alongside past leaders Mao Zedong and Deng Xiaoping, cementing his status as the most powerful man to head the country in decades.

"No one doubts Xi bestrides the landscape like a colossus. Organized or even unorganized resistance is inconceivable," said Jeremy Paltiel, a China expert at Canada's Carleton University.

Xi, the son of a Communist elder, has described his political ideology as central to setting China on the path to becoming a "great modern socialist country" by midcentury. This vision has at its core a ruling party that serves as the vanguard for everything from defending national security to providing moral guidance to ordinary Chinese.

The only other returning member to the apex ruling body was Premier Li Keqiang, the party's second-ranking official primarily responsible for overseeing the economy and leading the Cabinet. Li's authority was widely viewed as having been undercut by Xi's accumulation of power across various sectors of government.

The makeup of the committee reflects Xi's efforts to foster party unity by striking a balance between different interest groups in the 89-million member organization. They will run the rubber-stamp legislature and its advisory body and be responsible for areas that include propaganda, party discipline and ethnic and Taiwan affairs.

The inclusion of politicians from factions associated with Xi's predecessors Hu and Jiang Zemin in the Politburo Standing Committee pointed to the party's efforts to assuage concerns that Xi has been centralizing too much authority under him alone, analysts said.

"It signals balance and offers some relief to those who thought Xi will seek to place just his own loyal followers in key positions," said Dali Yang, a China politics expert at the University of Chicago.

Among the five new members, only Zhao and Li Zhanshu are seen to be Xi's proteges.

"What this shows is that these are not all the president's men," said Cheng Li, an expert in elite Chinese politics at the Brookings Institution. "This group is more like a team of rivals."

Zhao is expected to head the party's much-feared corruption watchdog. Xi's popular and wide-ranging anti-corruption campaign has been seen as boosting supervision over the party while also serving as a powerful weapon with which to purge his political opponents.

Some saw the absence of an anointed heir as similarly aimed at protecting Xi's authority and preventing him from being potentially undermined.

"A successor in the shadow of a powerful leader can be a dangerous position to be in," said Chicago's Yang. "With the current setup, it doesn't rule out Xi's retirement in five years, though it does provide more room for him to continue."

Others saw the move as a compromise made by Xi, who's viewed as favouring Chongqing party secretary Chen Min'er -- an official who would have had to break party norms on promotions in order to gain a place on the Standing Committee.

"Chen Min'er is such a clear protege of Xi Jinping," said Steve Tsang, director of the SOAS China Institute in London. "This shows that what remains of the resistance (to Xi) is still able to exercise some element of horse-trading constraint on Xi Jinping."

Chen was named to the 25-member Politburo, one rung below the Standing Committee, along with other Xi allies among whom a future successor could be drawn.

And despite his unrivaled dominion over the party, Xi will likely struggle to make it relevant to a rapidly evolving Chinese society with higher expectations for a fairer and more open environment. Xi has overseen one of the harshest crackdowns on civil society aimed at squelching dissent and activism among lawyers and rights advocates.

"The society, particularly the youth, are turning their back from the party and politics," Jean-Pierre Cabestan, an expert on Chinese politics at Hong Kong Baptist University. "They enjoy life and don't care about the congress or Xi."