Abandoned by state after explosion, Lebanese help each other 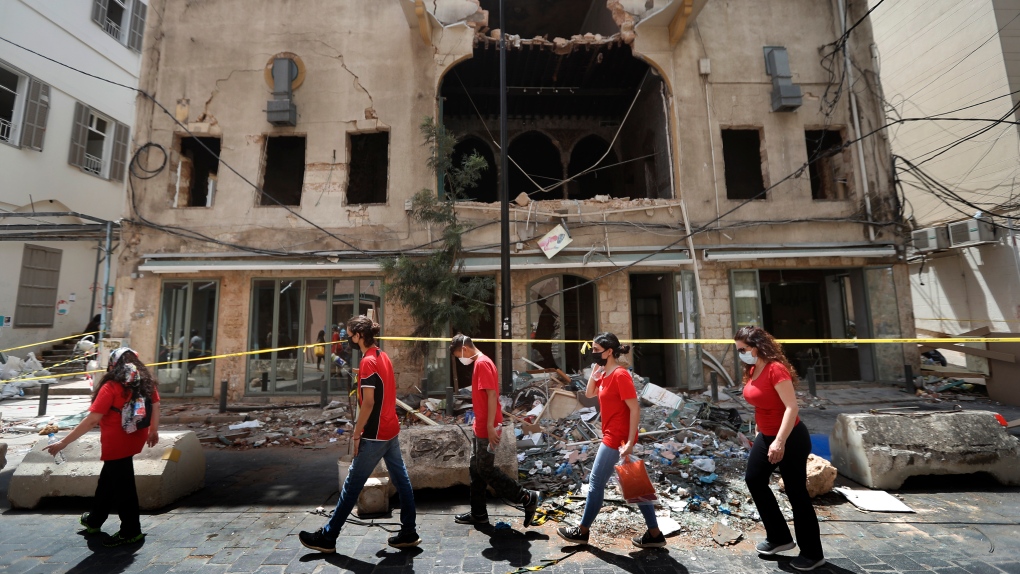 University students who volunteered to help clean damaged homes and give other assistance, pass in front of a building that was damaged by last week's explosion, in Beirut, Lebanon, Tuesday, Aug. 11, 2020. (AP Photo/Hussein Malla)

BEIRUT -- In the southern Lebanese town of Haris, a newlywed couple is living in one of Safy Faqeeh's apartments for free. He's never met them before, and they aren't on a honeymoon. Their apartment in Beirut was wrecked when last week's massive explosion wreaked destruction across the capital.

Faqeeh is one of hundreds of Lebanese who have opened their homes to survivors of the Aug. 4 blast.

The explosion, which was centred on Beirut's port and ripped across the capital, left around a quarter of a million people with homes unfit to live in. But they have not had to crowd into collective shelters or sleep in public parks.

That's because in the absence of the state, Lebanese have stepped up to help each other.

Some have let relatives, friends and neighbours stay with them. Others like Faqeeh extended a helping hand even farther, taking to social media to spread the word that they have a room to host people free of charge.

The couple saw Faqeeh's offer on Facebook for a free apartment he owns in Haris, some 50 miles (80 kilometres) south of Beirut. They can stay as long as they need to, the 29-year-old Faqeeh said, and he has a second apartment available for anyone else in need. "This is not help, it is a duty," he said.

When he was a teenager, Faqeeh's family home was damaged in the 2006 war between Israel and Hezbollah, and they had to stay in a house in Tripoli, clear on the other end of Lebanon. Now he's paying it forward. "We have experienced several wars and they (people) hosted us," Faqeeh said.

The help that Lebanese are giving goes beyond a place to stay. Armed with helmets and brooms, hundreds of volunteers have circulated through Beirut's heavily damaged neighbourhoods, cleaning up people's homes and doing free basic repairs, often enough to enable the residents to stay there.

The explosion left entire blocks in shambles, with streets blanketed in broken glass, twisted metal, broken brickwork. Yet within days, some streets were clean, the debris neatly sorted in piles. That was thanks to volunteers, often using social media to organize where to target.

In some places, they were sweeping streets and hauling away wreckage while security forces or soldiers stood nearby, watching.

That has only reinforced for Lebanese their government's failure to provide basic services, much less respond to the disaster. Many already blame the government and the broader ruling elite's incompetence, mismanagement and corruption for the explosion. Authorities allowed 2,750 tons of explosive ammonium nitrate to sit in a warehouse at the port unmonitored for seven years, despite multiple warnings of the danger, until it exploded when touched off by a fire. The blast killed more than 170 people, injured thousands and wreaked chaos across the city.

The government almost completely left the public on its own to deal with the aftermath. Outside the demolished port, there have been no government clean-up crews in the streets and little outreach from officials to help beyond promises of compensation to those whose homes or businesses were damaged.

The list of services people are offering keeps expanding. It now includes free glass for cars damaged in the blast, free maintenance of electrical appliances and free cosmetic surgery for people with face injuries. On Facebook, a group called Rebuild Beirut quickly sprung up. Its volunteers are working at full speed, helping clean up homes and link survivors with donors who will cover the expenses of repairs.

The individual acts of solidarity have been even more striking because Lebanon was already in the middle of a worsening economic crisis that has thrown hundreds of thousands into poverty and left households and businesses with little or no excess cash.

"I am so proud of the Lebanese people," said Kim Sacy, a 19-year-old university student. "There is no state, there is nobody, there is nothing -- we are the ones doing everything in the field."

Sacy is studying at a French university and was supposed to be on a program in Sweden this year but the coronavirus pandemic grounded her in Lebanon. She was outside Beirut driving home when the blast took place. She didn't feel the explosion but when she reached her neighbourhood of Achrafieh, she found it shattered. "This is where I lived my whole life," she said.

Sacy's family home was damaged, but she still wanted to help others. "It is not important. I consider myself lucky," she said. "It is the people who make the home." She said some of her family members were injured in the blast but are doing fine now.

Sacy began collecting food and other items to give to those in need. Around 25 families have reached out to her to donate, some she knows, but half are strangers. For the past week, she has been circulating around Beirut in her car to pick up donated furniture, first aid kits, bed sheets and kitchen utensils that she gives to a local non-governmental organization to distribute. When not doing that, she has been cleaning in the streets, including cleaning a fire station.

The self-help spirit has roots in the long civil war, when central authority collapsed and Lebanese had to depend on themselves to get by. In more recent years, waves of anti-government protests have emphasized volunteerism and civic duty -- boosted by social media that made connections bypassing the state easier.

The shock of the explosion and the trauma of seeing loved ones injured or a home wrecked has exacted an emotional burden on Beirutis -- especially with financial woes already weighing on people.

The Beit Insan well-being centre is offering free services to help people overcome the trauma that the blast may have caused. It is also encouraging people with money to "pay it forward" and cover costs for people to get psychological help.

"We know since all the events that have been happening, that less and less people have money for mental health," said Dr. Samar Zebian, co-founder and co-director of the centre. "We are a social business."