After months of souring relations with the West, Russia has launched its attack on Ukraine, commencing a full-scale military invasion of its neighbour.

Tensions between Moscow and the West over Ukraine date back to 2014, when Russia annexed the Crimean Peninsula. But these tensions reached new heights in late 2021, when Russia began to mobilize over 100,000 troops along the Ukrainian border.

Western intelligence agencies had warned that these troop movements were a prelude to an invasion. In preparation for this, the U.S., Canada and other allies had responded by deploying their own troops to NATO allies in Eastern Europe and sending military aid to Kyiv.

Attempts at diplomacy were unsuccessful. The Kremlin has called on the West to discontinue the further eastward expansion of NATO while the U.S. has urged Moscow to respect Ukraine's sovereignty. After Russian troops stormed into Ukraine, Canada and other Western nations responded by strengthening economic sanctions on Russia.

Here is a timeline of some of the key moments leading up to the invasion:

January 2005: Yushchenko takes power as the third President of Ukraine. He appoints former energy company boss Yulia Tymoshenko as prime minister, but she is sacked due to infighting.

April 2008: NATO promised Ukraine and Georgia they will one day join the alliance.

February 2010: Yanukovych defeats Tymoshenko in a presidential election. Ukraine and Russia agree on a deal about gas pricing in exchange for extending the lease for the Russian Navy in a Ukrainian Black Sea port.

November 2013: The "Euromaiden" protests erupt in the Ukrainian capital of Kyiv after Yanukovych shelves a free-trade deal with the EU in favour of closer ties to Russia.

February 2014: Protests continue to spread across Ukraine, with police firing live ammunition at demonstrators. The Ukrainian parliament votes to impeach Yanukovych and the interim government draws up an arrest warrant for the ousted president. However, Yanukovych flees to Russia, decrying his removal as a "coup."

March 2014: The regional parliament holds a referendum on the status of Crimea just two weeks after the Russian military occupation begins. Over 95 per cent vote in favour of joining the Russian Federation. Russia then signs a treaty with Crimean leaders to formally annex the peninsula.

In response, the leaders of the G8 remove Russia from the bloc, which is now known as the G7. The annexation is also declared illegal in a non-binding resolution adopted by the UN General Assembly.

April 2014: Pro-Russia separatist militants take control of the Donbas region of eastern Ukraine. These militants are believed to be supported by the Russian government, although Moscow has denied being directly involved in the conflict.

March-December 2014: Throughout the year, then-Canadian prime minister Stephen Harper announces numerous sanctions affecting Russian and Ukrainian companies and individuals involved in the annexation of Crimea and the armed separatist movement in Donbas. 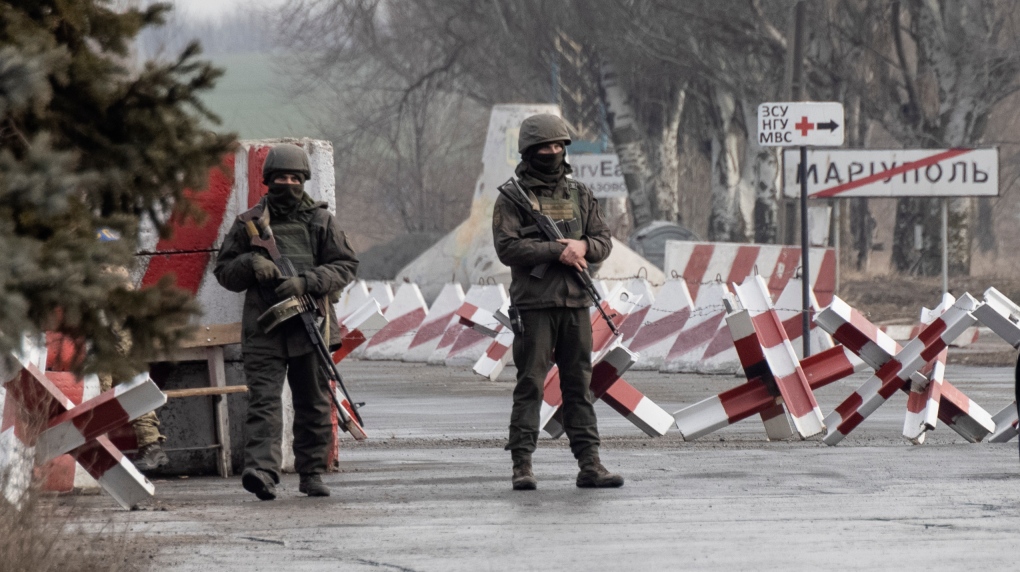 June 2016 – March 2021: Canada adds more Russian and Ukrainian individuals and companies to its sanctions list. So far, these measures have affected more than 440 individuals and entities.

July 2016: The Canada-Ukraine Free Trade Agreement is signed, entering into force in August of the following year.

July 2019: Actor and comedian Volodymyr Zelensky is elected President of Ukraine in a landslide vote, ushering in a new era of Ukraine-Russia relations.

September 2019: Whistleblowers allege that then-U.S. President Donald Trump had frozen US$400 million in security aid for Ukraine in an attempt to coerce Zelensky into investigating political rival Joe Biden and his family for damaging information.

November 2021: Satellite imagery shows a build-up of Russian troops on the border with Ukraine, stoking fears of a potential invasion. Zelensky also says that Russia had mobilized 100,000 soldiers in the border area, along with tanks and other heavy equipment.

Jan. 2, 2022. In a call with Zelensky, Biden promises that the U.S. and allies with act "decisively" if Russia further invades Ukraine.

Jan. 31, 2022: Canadian Defence Minister Anita Anand travels to Kyiv to meet her Ukrainian counterpart. While Ukraine has asked for lethal weapons, Canada does not commit to providing any.

Feb. 7, 2022: In an attempt to defuse the standoff over Ukraine, French President Emmanuel Macron holds talks in Moscow while German Chancellor Olaf Scholz meets with officials in Washington.

Feb. 8, 2022: Ottawa urges all Canadians to leave Ukraine immediately and issues a warning against any travel to the country. The U.S., U.K., Germany and other NATO allies also issue similar warnings for their own citizens.

Feb. 11, 2022: The U.S. escalates its warning, saying that a Russian invasion could happen at any moment.

Feb. 13, 2022: Some members of the Canadian Armed Forces working in Ukraine temporarily relocate to another location in Europe. The U.S. also says there are more than 130,000 Russian troops at the border.

Feb. 14, 2022: Canada announces another $500 million loan package for Ukraine, along with $7.8 million worth of lethal weapons.

Feb. 15, 2022: Russia announces a partial troop withdrawal from drills near Ukraine, suggesting that an invasion may not be imminent.

Feb. 16, 2022: The White House disputes Russia's claims of troop withdrawal and says Moscow has increased its force at the border by 7,000 troops.

Feb. 17, 2022: Shells hit a kindergarten in the Donbas region of Ukraine, which continues to be controlled by pro-Russia separatists. Meanwhile, after two days of meetings with her NATO counterparts, Defence Minister Anita Anand says Canada is looking into ways to reinforce Canada's commitment to the military alliance.

Feb. 18, 2022: The Russian military announces it will conduct drills of its strategic nuclear forces.

Feb. 21 2022: In a speech, Putin decried the events in Ukraine, and blames the West and Ukraine for tensions. He then signed a decree recognizing two breakaway regions in eastern Ukraine as independent entities, known as the so-called “Donetsk People’s Republic” (DNR) and the “Luhansk People’s Republic” (LNR). Shortly afterwards, U.S. President Biden responded by announcing he will sign an executive order that will impose sanctions prohibiting new investment, trade and financing by U.S. persons to, from, or in the so-called DNR and LNR regions.

Feb. 22, 2022: The U.S., Canada and other allies impose sanctions on Russian oligarchs and banks as an invasion appears close to imminent. Trudeau also announces that 460 Canadian Armed Forces will be deployed to Latvia as a party of Operation REASSURANCE to "reinforce" Canada's commitment to NATO

Feb. 23, 2022: Ukraine's parliament votes to declare a state of emergency. Cyberattacks also take down websites belonging to the Ukrainian government and affiliated organizations.

Feb. 24, 2022: Putin announces early in the morning that Russia will conduct a "special military operation" in Ukraine. A short time after Putin's announcement, explosions were heard in Kyiv and other Ukrainian cities as Russian forces commenced their full-scale invasion.