A rare look at life inside Lesbos' Moria refugee camp, the island prison

Trigger warning: Some of the details may be distressing to readers

LESBOS, Greece - The customs officer smiled when I told him why I was going to Lesbos. “It’s an old problem,” he said. “But, it’s still a problem,” I answered. He stamped my passport, laughed, and then told me to take a few [migrants] with me on my way back.

Moria refugee camp, Greece’s biggest, and arguably the most controversial camp in Europe, is located in Lesbos, a mere six kilometres from Turkey. From there, an unknown number have drowned trying to cross the Aegean Sea on inflatable dinghies, and some now trapped in Lesbos believe they might have been better off at the bottom of that sea.

There are between 700,000 and 800,000 Rohingyas who have found refuge in Bangladesh in the past year. So why is there such a big deal surrounding the roughly 8,000 refugees and migrants waiting for asylum on a Greek island? The short and grossly unfair answer is, because it’s on European soil. You can leave the camp and walk 10 kilometres, as the migrants often do, and find yourself in front of a boutique hotel surrounded by islanders and tourists drinking ouzo and eating calamari. The contrast is hard to grasp -- just ask Doctors Without Borders who says the burnout rate among staff is the highest in the world.

The conditions in Moria camp, compounded by the severe trauma asylum seekers have brought with them, have led to a problem aid agencies say they’ve rarely, if ever, seen before: refugees and migrants, including children, attempting suicide.

Unlike most camps, Moria didn’t grow in size as the number of arrivals skyrocketed. They just piled on top of each other in a space that was designed for just 3,000. A makeshift camp next to it is expanding, but most are stuck in Moria, which was once a military installation. Asylum seekers used to only spend two or three days here before taking a ferry to the Greek mainland and then travelling along the Balkan route hoping to reach countries such as Germany and Sweden; but that changed in 2016 after the EU struck a deal with Turkey. Now, once they reach the island, they are trapped until their asylum application is processed. They’ll either go to the mainland, or be sent back to Turkey. Some, mostly economic migrants, have been waiting here for more than two years.

Journalists, especially with cameras, are rarely given access to Moria camp, but the people inside are free to come and go.

There are 58 different nationalities in this camp trying to co-exist in filthy conditions. Most of their days are spent lining up in a giant cage and often fighting for food that’s not always edible. Raw sewage has found its way to the tents where children sleep, according to a recent report by the International Rescue Committee. At night, the water is turned off and clashes can turn violent. Stabbings are not a rare occurrence and women are more easily assaulted.

The IRC report says that 30 per cent of its patients have attempted suicide. However, the camp is so overcrowded they’re often discovered before it’s too late. 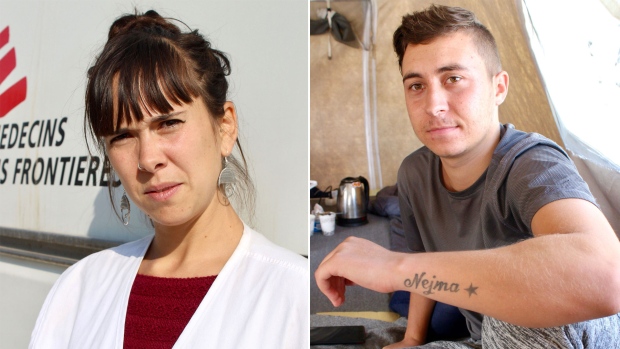 Idoia Moreno, the Moria clinic co-ordinator for Doctors Without Borders, (left) and Bilal Ibrahim, a refugee from Syria.

Idoia Moreno, the Moria clinic co-ordinator for Doctors Without Borders, was previously posted to the Democratic Republic of Congo, Central African Republic, Mozambique and Angola and she’s adamant that she’s never seen anything like this -- not even in Ebola camps.

“I have families, fathers, mothers in our clinics with three small kids who are telling me, ‘We are escaping from Syria, Afghanistan, Congo, horrible wars and what we are finding in Moria refugee camp is even worse than what we are escaping, we prefer a bomb killing [us] and all my family than having to life in this [inhumane] living conditions in Moria,’” she says.

One pediatrician tells me about a seven year-old boy, her youngest patient who, twice, tried to take his own life. First, with a rope. The second time, his dad caught him as he was about to jump off a roof. The refugees come to Lesbos already damaged, many having witnessed executions, family members being tortured and bombs falling all around them. A psychiatrist tells me most of his patients suffer from hallucinations and PTSD, they can still see and hear the perpetrators they escaped in their respective countries. Combine the untreated trauma with cramped and appalling living conditions at Moria, and the result is a shocking mental health crisis.

Tooshy Ibrahim is in his 20s, from Falluja, Iraq. He came here alone after he says 9 of his family members were killed in a rocket attack. Single men, compared to families, have to wait much longer.

In his tent are four other single men, mostly from Syria. One of them, Bilal Ibrahim, has the name of his girlfriend, Nejma, tattooed on his forearm. She’s been in Germany for four years. As soon as we sit, he starts making us tea.

“If it gets any worse than this, I’ll go back to Iraq,” says Tooshy. He admits he buys drugs off some of some of the migrants to help escape the boredom. The drugs are smuggled in from Athens. “I can’t live in the real situation,” he says. I ask about the scars on his arm. “The Afghans,” he answered. He says they jumped him with razor blades.

'…In Moria, they kill us every day'

Nearly half of the camp’s population, 48 per cent, is Afghan, an all-time high since the height of the migrant crisis. Among them is 17-year old Sami who would like to live in Toronto and become a martial arts champion. “Our children have become beggars,” he told us during a protest outside the camp. People ask him to translate: one father complains of bedbugs in their family tent, another, of mice. Neda Yacoubi also speaks English: she tells me they’re treated like animals here.

“We came here for a better life. We escaped from Afghanistan because there was war, but here we can’t save our life. How can we do that? We don’t study, we don’t work, there’s no food, so what do we do?” she asked.

Sami’s words are particularly hard to forget. I asked him if Afghanistan is really worse than this place: “In Afghanistan,” he says, “the Taliban kill us once, but in Moria they kill us every day.”

These are the faces of Moria