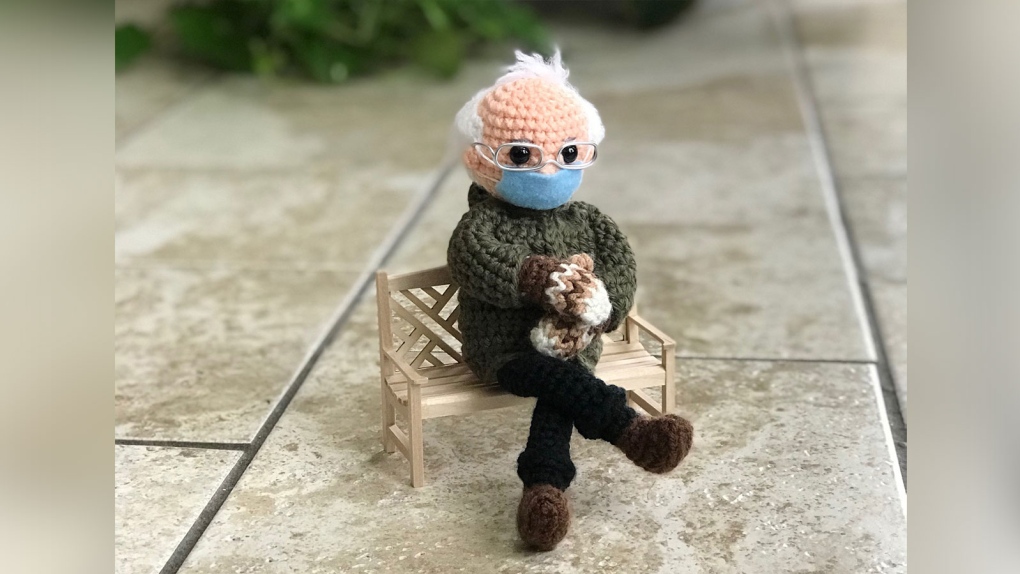 This doll is up for auction on eBay with proceeds going to Meal on Wheels America. (Tobey Time Crochet via CNN)

A handmade crocheted doll inspired by the viral inauguration meme of Sen. Bernie Sanders raised more than US$40,000 for Meals on Wheels America when it was sold in an online auction Tuesday.

The maker of the doll, Tobey King, placed it up for auction on eBay, promising 100% of the profits to the charity.

"I was talking with another crafter friend who told me Bernie had just sold some hoodies and donated all the proceeds to Meals on Wheels Vermont, and I knew that that is what I wanted to do with the doll I made," said King, owner of Tobey Time Crochet. "With the attention it was getting I was hopeful Meals on Wheels would get a good donation."

The starting bid for the handmade doll Saturday was only 99 cents, but by Tuesday the item had 167 bids with a winning bid of $20,300. An eBay spokesperson told CNN in a statement that it was "inspired" by King's decision to donate the proceeds and that the company would be matching the winning bid to "help support even more people in need."

That means the total raised from the auction is more than $40,000.

"Senator Sanders has long been one of Meals on Wheels' biggest advocates, and it's incredible to see how his unexpected moment in the spotlight is inspiring others to join the fight to address senior hunger and isolation, as well," Jenny Young, vice president of communications for Meals on Wheels America, told CNN before the auction ended.

Last week, the Sanders campaign store started selling sweatshirts featuring the photo that inspired the countless memes, and all the proceeds are going to Meals on Wheels programs in Sanders' home state of Vermont.

Young told CNN that Meals on Wheels America is an official eBay charity and that King selected the organization to receive 100% of the sale.

"Amid the pandemic, the demand for Meals on Wheels has skyrocketed as more vulnerable older adults find themselves homebound and in need of this vital lifeline," said Young in a statement earlier this week. "The awareness for our cause is needed now more than ever, and on behalf of the entire nationwide network, we greatly appreciate the support."

Just like the meme of Sanders, King's design and photos of her handmade doll went viral last week when she posted pictures of her creation on social media. She told CNN it took her seven hours to crochet the 9-inch doll that is made to sit, and a tiny wooden bench is included.

King, from Corpus Christi, Texas, patterned it off a previous doll she made of Sanders when he ran for president in 2020. This time, she added the now-famous brown and white knit mittens along with a blue felt face mask.

"I just really like and support Bernie," said King, 46, who has been crocheting for eight years. "I think he's great."

The mother of two started crocheting, according to her website, when she quit her job to be a stay-at-home mom. She started making scarves and clothes before deciding to try her hand at making a doll for her daughter. King has since made dolls inspired by famous people ranging from the singer Selena to the cast of "The Golden Girls."

While the Sanders doll was sold for charity, King is also selling the crochet pattern on her Etsy store so anyone can make their own collector's item.

"The attention that my Bernie doll and I have received is unbelievable," said King. "I'm overwhelmed with gratitude."