A chariot awaits: Harry and Meghan to employ carriage fleet at wedding

The Royal Family’s fleet of state coaches and open-topped landaus will play a prominent role in Prince Harry’s wedding to Meghan Markle, with many carriage options available for the happy couple and their entourages.

The Royal Mews boasts several historic carriages to choose from, including the aptly-named Gold State Coach, the not-so-aptly-named Glass Coach and the 1902 State Landau, which has played a particularly significant role in recent royal weddings.

The Mews has served as the Royal Family’s stable for centuries, although the name itself is a bit of a misnomer. The original Mews was built at Charing Cross to house King Richard II’s hawks in 1377, and was named for the “mewing” process that involves caging a hawk until it molts. The first Mews burned down in 1534 and was rebuilt by King Henry VIII, who kept the name but repurposed the structure for horses.

The Royal Mews was moved to Buckingham Palace when the palace was established by King George III in 1762, and has housed the Royal Family’s growing fleet of carriages ever since.

Some carriages at the Mews were built for specific occasions or ceremonial purposes, while others were simply added to the fleet out of necessity during the heyday of horse-drawn conveyances.

The Mews also houses approximately 30 horses and a handful of armoured Bentley and Rolls-Royce state cars, in addition to the more than 100 carriages on the property.

Most of the horses at the Mews are Windsor Greys or Cleveland Bays, although there are occasionally some Hanoverian Creams there as well.

The Royal Family only ever uses its horse-drawn carriages for special occasions these days, such as a funeral, an opening of Parliament or a wedding.

So which ones will they use for Harry and Meghan?

Here are some of the top options. 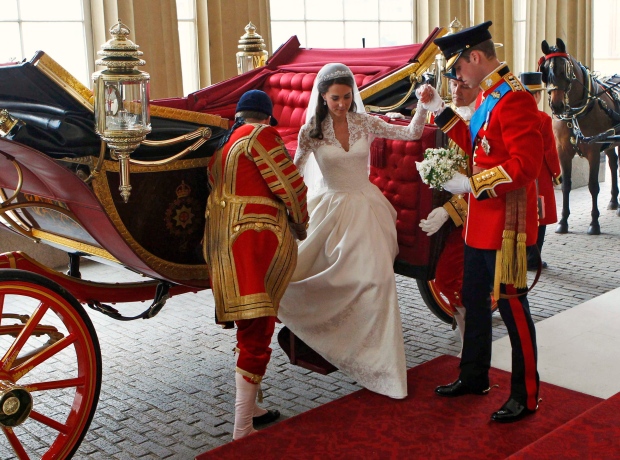 Prince William, right, helps his wife Kate, the Duchess of Cambridge, down the steps of the 1902 State Landau carriage as they arrive at Buckingham Palace after their wedding at Westminster Abbey, London, Friday, April 29, 2011. (AP Photo/Andrew Winning, Pool)

The Royal Family’s open-topped landau of choice was built for King Edward VII’s coronation in 1902. The carriage is made from wood, with a black exterior, gold trim and a red interior.

The 1902 State Landau is used for occasions where its occupants want to be visible, so it will likely see use if the weather is good. 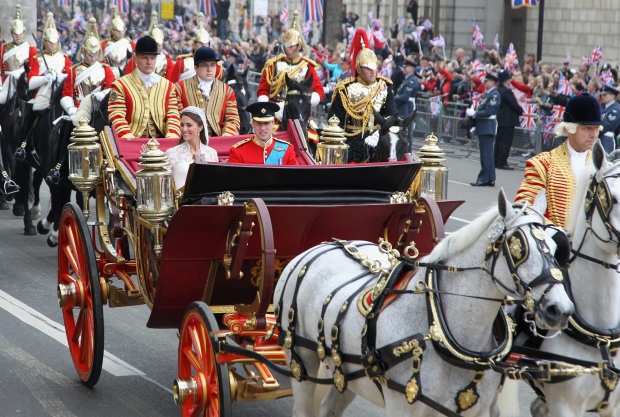 It also holds special significance for Prince Harry. It was used in Prince William’s wedding to Kate, and in the marriage of William and Harry’s parents, Prince Charles and Diana. 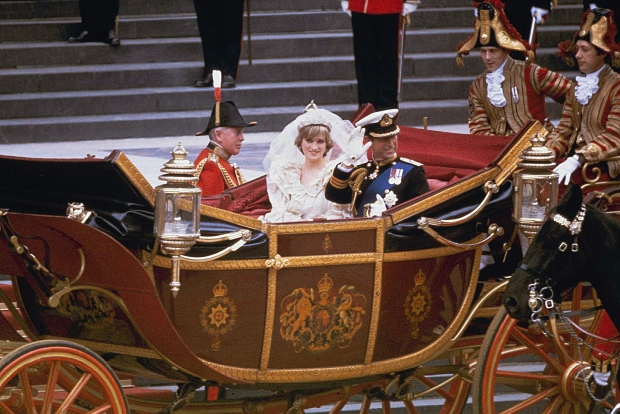 In this July 29, 1981 file photo, the carriage carrying Prince Charles and Diana, the Princess of Wales passes along Trafalgar Square on its way from St. Paul's Cathedral to Buckingham Palace after the royal wedding in London. (AP Photo) 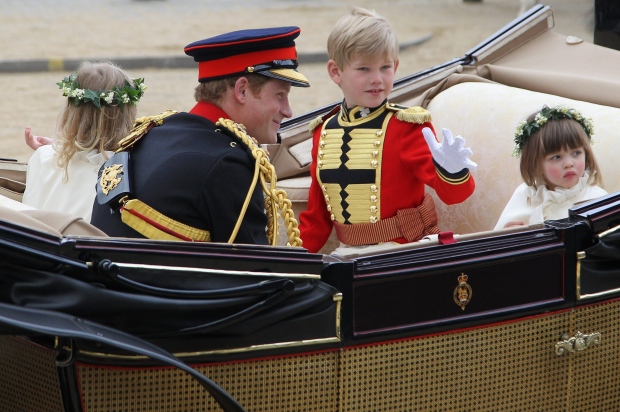 The Semi-State Landau design was a favourite of Queen Victoria. It was used to convey her to her Diamond Jubilee Thanksgiving service in 1897, and the design is still in use today. There are more than one of these open-topped carriages, which could be used for secondary members of the wedding party. 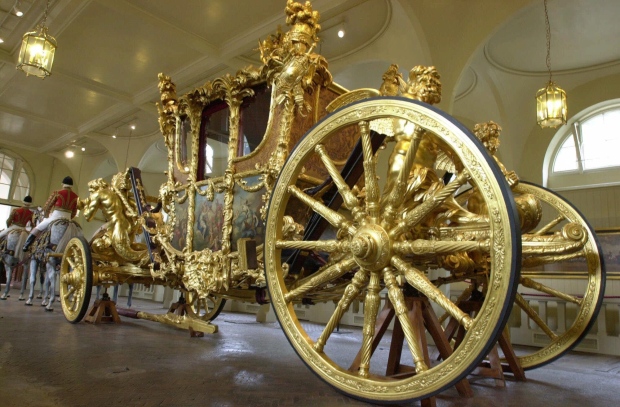 The Gold State Coach was commissioned to be built for King George III’s coronation and wedding in 1761, although the complexity of the project meant it took an extra year to complete.

The close-topped, gilded state coach is adorned with gold cherubs, lined with upholstered velvet and satin and designed to be drawn by eight horses.

The Gold State Coach is the oldest state coach in the fleet, and the only one that dates back to the construction of the Mews at Buckingham Palace. It was designed by architect Sir William Chambers, with sculpting by carver Joseph Wilton and paintings done by Italian artist Giovanni Cipriani. 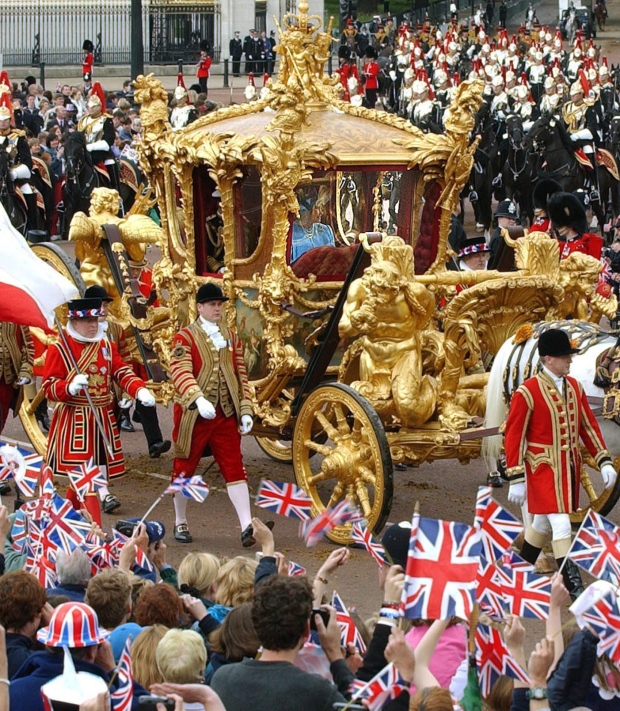 Queen Elizabeth II, accompanied by her husband Prince Philip, rides in the Gold State Coach from Buckingham Palace to St Paul's Cathedral for a service of thanksgiving to celebrate her Golden Jubilee, in London, Tuesday June 4, 2002. (AP Photo/John Giles) 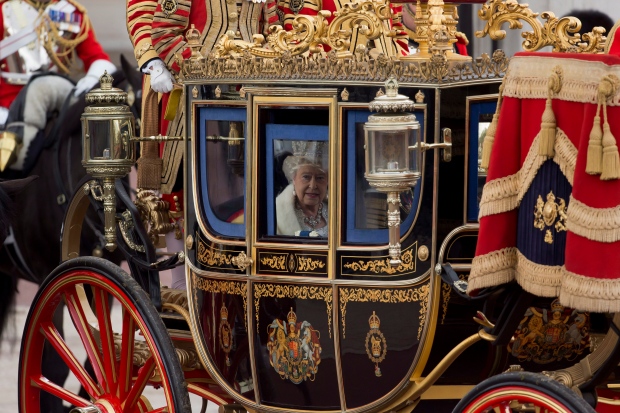 Queen Elizabeth II leaves Buckingham Palace in the Irish State Coach, to deliver her speech at the State Opening of Parliament in London, Wednesday, May 8, 2013. (AP Photo/Matt Dunham)

The Irish State Coach was built in 1851 and acquired a few years later for Queen Victoria, who made it her carriage of choice a decade later. The carriage has a blue and black gilt exterior and a blue interior, and is designed to be pulled by two or four horses.

The original coach burned down to its frame in 1911, but was rebuilt within a year.

Queen Elizabeth often uses the Irish State Coach to travel to the state opening of Parliament.

Queen Elizabeth II and Prince Philip arrive in the Scottish State Coach during the televised celebration of the Queen's 90th birthday in the grounds of Windsor Castle in Berkshire, Britain, Sunday, May 15, 2016. (Andrew Matthews/PA via AP)

The Scottish State Coach was built for the then-Duke of Cambridge in 1830, and used for the coronation of King William IV the following year. It was originally known as the Cambridge Coach, but was remodelled and renamed in 1968-’69 on orders from the Queen to make it represent Scotland. The carriage now features emblems of the Order of the Thistle, Scotland’s highest order of chivalry, and has been upgraded with more windows to make the monarch more visible. A replica of the Crown of Scotland sits on its roof, and its sides are adorned with the Scottish version of the Royal Arms.

The four horse-drawn-carriage is occasionally used for the state opening of Parliament.

The Queen and Prince Philip rode in the Scottish State Coach at Prince William’s wedding in 2011. 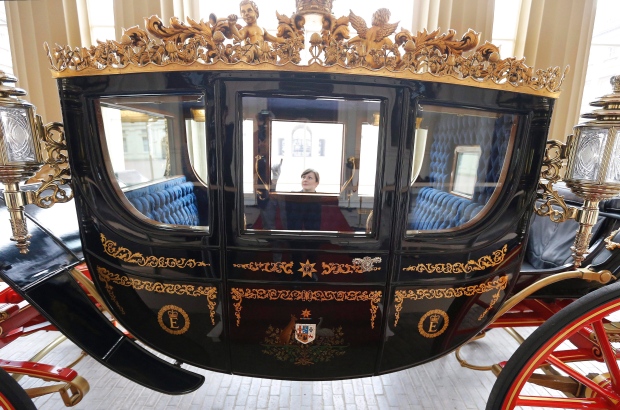 The Australian State Coach used in the state visit procession is displayed during a press preview for the summer opening of Buckingham Palace in London, Thursday, July 23, 2015. (AP Photo/Frank Augstein)

The Australian State Coach is among the more recent additions to the Royal Mews. It was a gift from Australia to the Queen on May 8, 1988, to mark Australia’s 200th anniversary. It was the first of two carriages built for the Royal Family by Australia’s Jim Frecklington, who designed it to be pulled by six horses.

The coach is one of the few to boast modern features such as electric windows, heating and stabilizers to minimize what can often be a bumpy ride.

This coach has also been used for the state opening of Parliament. 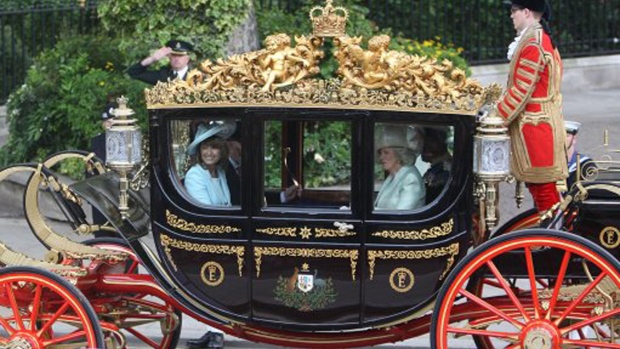 The Queen Alexandra’s State Coach had perhaps the longest road to becoming an official carriage of the Royal Family. It was built in the 1860s and served approximately three decades as a town coach, before it was bought by the Royal Mews and converted to a four-horse state coach for Alexandra, who was the Princess of Wales at the time. She continued to use it after she became Queen.

The Queen Alexandra’s State Coach is another option for the Queen at the state opening of Parliament. 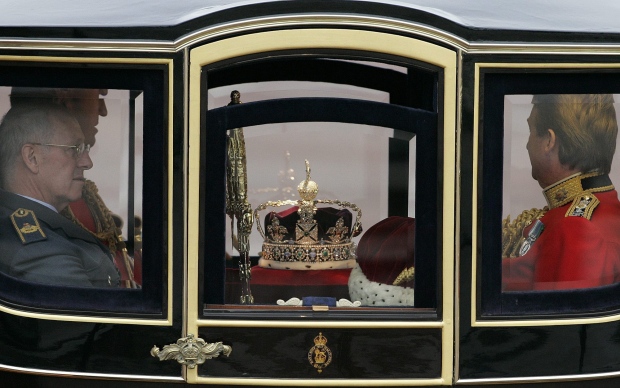 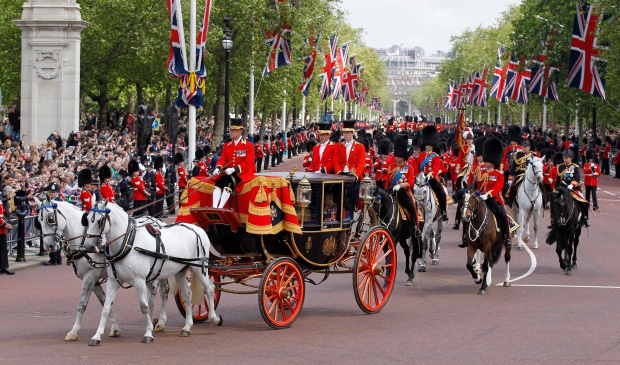 A horse drawn carriage carries Queen Elizabeth II and Prince Philip down the Mall to Buckingham Palace after the Trooping The Colour at the Horse Guards Parade in London, Saturday, June 16, 2012.(AP Photo/Sang Tan)

The two or four horse-drawn Glass Coach was built in 1881 and used for King George V’s coronation in 1911.

The dark maroon-coloured carriage is often used in weddings involving the Royal Family, and was a backup option for the Duke and Duchess of Cambridge away from the church following their wedding in 2011.

The Glass Coach has traditionally been used to bring the bride to the church, although Kate Middleton opted not to use it for her wedding to William in 2011. Instead, she broke from tradition and used a Phantom VI Rolls-Royce from the Mews.

With its covered roof, the Glass Coach will likely be on standby in case of rain at Harry and Meghan’s wedding in May. 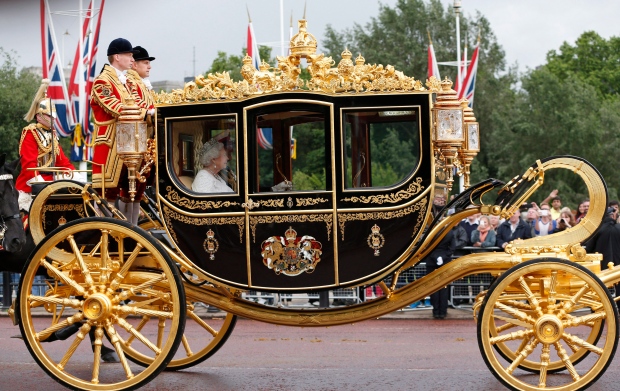 The Queen’s Diamond Jubilee State Coach is the newest one in the fleet, and was built in Australia by Jim Frecklington in 2014 for the 60th anniversary of Elizabeth’s accession.

The six horse-drawn carriage is a true blend of tradition and technology, with a classic look that conceals an aluminum body and hydraulic stabilizers meant to ensure a smooth ride. Twenty-four diamonds, 130 sapphires and 400 books of gold leaf were used in its construction.

The crown on the closed-top carriage is made of repurposed wood from HMS Victory, which served as Lord Nelson’s flagship at the Battle of Trafalgar in 1805. Other artifacts related to the monarchy have also been worked into the design, including a fragment of the Stone of Destiny used in coronations, timber from King Henry VIII’s flagship and a piece of Sir Isaac Newton’s apple tree.

The carriage reportedly cost approximately US$4.5 million to build, although many of its components are irreplaceable.

The Diamond Jubilee State Coach is the fanciest carriage at the Royal Mews, but it’s unclear whether it will be used in the fanciest wedding of the year. And even if it does see action, the question remains: will it carry the newlyweds, or the Queen? 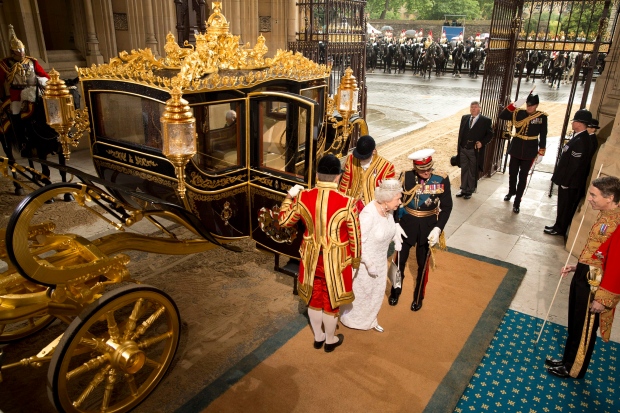