A brief look at the NATO summit declaration 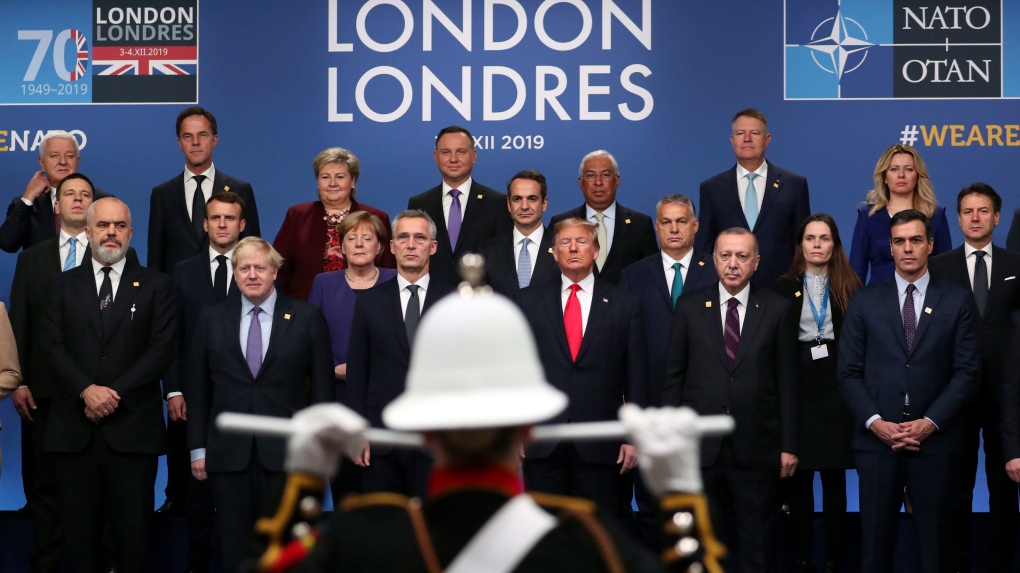 NATO heads of state attend a ceremony event during a NATO leaders meeting at The Grove hotel and resort in Watford, Hertfordshire, England, Wednesday, Dec. 4, 2019. (Steve Parsons/PA via AP)

WATFORD, ENGLAND -- NATO leaders played down their differences on Wednesday, issuing a communique after a short summit near London underlining their commitment to defend each other in times of trouble.

The short document was published after about four hours of talks at a luxury hotel and golf resort just outside London.

Following are its main points:

Marking the 70th anniversary of NATO, which was founded in 1949 to confront the security threat posed by the then Soviet Union, the leaders said the trans-Atlantic alliance is the cornerstone of their collective defence. They also underlined their commitment to Article 5 of NATO's Washington Treaty, saying "that an attack against one Ally shall be considered an attack against us all."

The leaders then pledged to boost their military budgets in line with previous promises to move toward spending 2% of their annual GDP on defence by 2024. They noted that European allies and Canada have increased spending for the last five years in a row and have invested an extra $130 billion since 2016. "We are making good progress. We must and will do more," they said.

The leaders noted that NATO faces a multitude of threats, including from Russia and terrorism. "Russia's aggressive actions constitute a threat to Euro-Atlantic security; terrorism in all its forms and manifestations remains a persistent threat to us all," they said. They also noted that "instability beyond our borders is also contributing to irregular migration."

Arms control was also a theme, given the demise of the Intermediate-Range Nuclear Forces treaty between Washington and Moscow. "We are fully committed to the preservation and strengthening of effective arms control, disarmament, and non-proliferation," the leaders said. They added: "We remain open for dialogue, and to a constructive relationship with Russia when Russia's actions make that possible."

The leaders reaffirmed their commitment to Afghanistan, where NATO has its longest and most ambitious security operation. They also underlined that they are increasing co-operation with the United Nations and the European Union. North Macedonia's imminent membership was welcomed as a sign that NATO's door remains open to European countries who want to join.

Turning to modern challenges, the leaders vowed to protect critical infrastructure, including 5th generation telecommunication networks, to ensure energy security and work together to counter cyber-attacks and hybrid warfare. They declared that space is now an "operational domain," after land, sea, air and cyber space. They said they must also address the "opportunities and challenges" posed by the rise of China.

To counter concerns about poor political decision making, the leaders accepted to set up a "reflection group" led by Secretary-General Jens Stoltenberg "to further strengthen NATO's political dimension including consultation."

After three consecutive years of summits, the leaders agreed to meet again only in 2021.