8 takeaways from the Democratic presidential debate in South Carolina 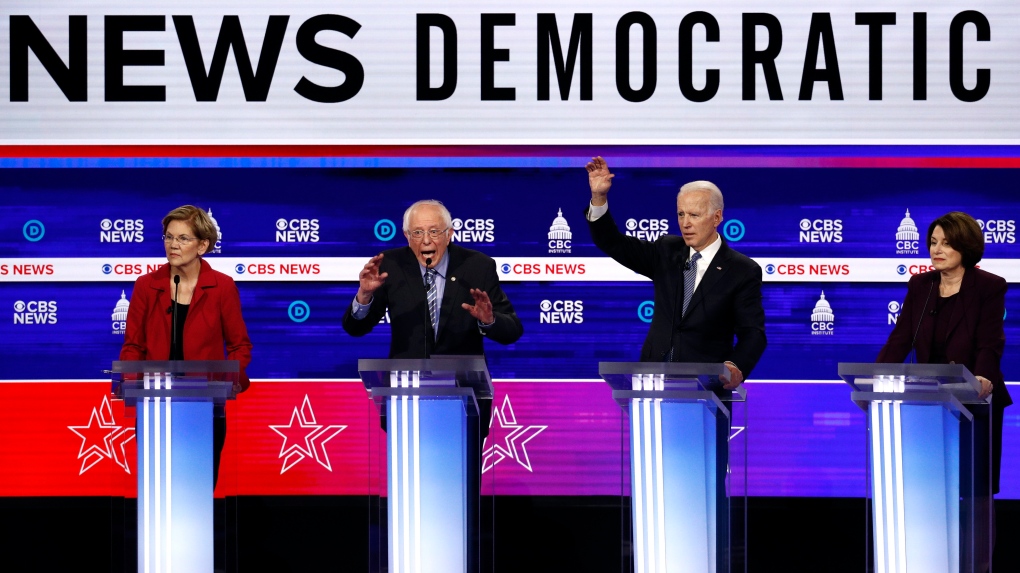 Tuesday night's debate was a frenetic free-for-all, with six candidates all trying to knock Democratic presidential front-runner Bernie Sanders off the course of claiming the party's nomination.

But a series of narrower fights might have mattered even more, as everyone in the field vies to emerge as the lone challenger to Sanders with time running out: South Carolina's primary is Saturday and Super Tuesday, when 14 states and American Samoa vote, is three days later.

Former Vice President Joe Biden and billionaire businessman Tom Steyer fought over their records on race, courting a much narrower audience: the African American voters who will make up more than half the electorate in South Carolina.

Visit CNN's Election Center for full coverage of the 2020 race

Among Biden's competitors in the moderate lane, former South Bend, Indiana, Mayor Pete Buttigieg tried to hammer Sanders all night -- talking over his answers repeatedly in his most aggressive debate performance yet. And Minnesota Sen. Amy Klobuchar stayed above the fray, instead offering herself as an above-it-all alternative to the food fight viewers were watching.

Warren set the tone. Bloomberg followed, then Buttigieg, then Biden.

By the end of the first half-hour, everyone onstage had taken a whack at Sanders. Their aim was clear: knock him off his pedestal.

Whether they hit the mark is another question.

Bloomberg said Sanders was a weak general election candidate, which is why "Russia is trying to get (him) elected." Warren accused Sanders' team of "trashing" her over her plan to pay for "Medicare for All." Buttigieg scoffed at Sanders' calls for political revolution when -- in refusing to blow up the Senate filibuster -- he won't make "a rule change." Biden again slammed Sanders over his votes against the Brady Act, which mandated a waiting period on handgun purchases.

Sanders was also put on the defensive by the moderators, who questioned his past support for legislation that protects gun manufacturers from lawsuits, his comments -- recently and going back decades -- about Cuba and whether he was sufficiently pro-Israel.

In front of an audience that didn't cheer even for his most reliable applause lines, Sanders stuck to the message that has been core to his campaign. There were missteps, but for rivals desperate to change the trajectory of the race, the knockout blow never came.

In Saturday's primary in South Carolina, the most important constituency is African-American voters, who make up more than half the electorate and who Biden has called his "firewall" of support.

That reality turned the debate into a brawl between Biden and Steyer, who has made significant inroads with black voters after focusing his campaign on South Carolina more than any other state.

"They hogtied young men in prison here in this state. They in fact made sure that in Georgia they did not have health care for the people that were being held," Biden said.

"You wrote the crime bill," Steyer shot back, referencing the 1994 legislation signed into law by former President Bill Clinton and noting that it had imposed stiff mandatory minimum sentences that had left hundreds of thousands of black and brown people in jail.

Steyer then talked about all the efforts he has made to end the private prison system in California and address systemic racism in the criminal justice system.

Warren offers herself as the safer version of Sanders

Warren has been quietly chipping away at Sanders for weeks. On Tuesday night, she showed her hand early on.

After talking up the Democratic Party's progressive wing and its goals, sprinkling in some praise for Sanders, she began to explain why she was the better bet to turn those ideas into reality.

She was most pointed on their shared support for Medicare for All, the bill Sanders famously wrote and Warren, after backing it, first put out a plan to finance, then said she would implement in two separate stages.

After she "dug in" and offered the pay-for plan, Warren added, "Bernie's team trashed me for it."

Her message was clear: If you like Sanders' politics and want his platform to become a reality, I'm the one to make it happen -- and unify the party in the process.

Sanders still has a Cuba problem

Other candidates might have failed to nail him down on it. But Sanders showed he hadn't come up with a stronger explanation for his praise of Fidel Castro's Cuban regime's literacy efforts -- something that could become a long-term political headache for the Vermont senator's campaign.

On Tuesday night, Sanders pointed out that former President Barack Obama had made comments similar to his about Cuba.

"Occasionally, it might be a good idea to be honest about American foreign policy, and that includes the fact that America has overthrown governments all over the world -- in Chile, in Guatemala, in Iran, and when dictatorships, whether it is the Chinese or the Cubans, do something good, you acknowledge that, but you don't have to trade love letters with them," Sanders said.

That moved him past the moment Tuesday night. But it likely won't calm the nerves of Democrats -- especially in Florida -- who are worried about how the GOP will weaponize Sanders' words.

Bloomberg's performance last week in Las Vegas was disastrous -- so the mayor canceled all but one event in between the two debates to prepare for his second appearance on stage.

And, while his performance Tuesday was far from perfect, the extra preparation showed.

Bloomberg faced harsh attacks from Warren over lewd comments he made to former employees and comments he made about redlining, racist policies that blocked African Americans and Latinos from buying homes for decades.

But Bloomberg approached the debate differently and was far more aggressive in pushing back and attempting to move on.

He said Warren was "misinformed" on redlining and presented a litany of housing policies he pushed as mayor. And when Warren attacked him for reportedly telling a female employee who was pregnant to "kill it," Bloomberg simply said, "I never said that."

Bloomberg got to tout his own policies, and said his approach to trans-fats and sugary beverages in New York wouldn't translate nationally. He said Chinese president Xi Jinping isn't a dictator -- a remark that drew an immediate rebuke from Sanders.

But Bloomberg was on the verge of making a major gaffe, nearly saying he "bought" House races in 2018 before catching himself and instead saying, "I got them."

Buttigieg makes everything about Sanders

Buttigieg made clear on Tuesday that the only way he wins the Democratic nomination is by taking Sanders down.

Nearly every moment Buttigieg was able to comment on -- from foreign policy, to health care to his campaign fundraising -- was turned into an attack on the frontrunner. And Buttigieg was far more aggressive than any past debate, regularly jumping in and talking over Sanders when he could.

"Look, if you think the last four years has been chaotic, divisive, toxic, exhausting," Buttigieg said, "imagine spending the better part of 2020 with Bernie Sanders vs. Donald Trump."

Buttigieg also took Sanders on for criticizing his fundraising, questioned the senator's ability to "deliver a revolution" and echoed the fears some Democrats have about the independent by stoking speculation about what his nomination would mean to down ballot races for the House and Senate.

"They are running away from your platform as fast as they possibly can," Buttigieg said of House members who won for the first time in 2018.

While Buttigieg delivered a steady performance, his strategy also reflects the fact that, without a significant change in the race, the former mayor's window to the nomination could be closing.

The Klobuchar that delivered a combative, fiery performance at the debate last week in Las Vegas was almost unrecognizable compared to the candidate who criticized the field for discord on Tuesday night.

Klobuchar barely leveled any attacks on Tuesday night; instead, she consistently answered some of the more substantive questions and attempting to sound like the voice of reason on an otherwise chaotic stage.

It's a departure for the senator, who was unafraid to mix is up last week, especially with Buttigieg, a candidate she has long had a deep-seated animosity towards.

Klobuchar still got a few shots in, like when she hit Sanders over Medicare for All and subtly knocked Buttigieg for mentioning his campaign website on stage. But her debate was more defined by answers on both domestic and foreign policy and the moments where she took issue with the tone and tenor of the contest.

Biden was in the middle of an answer when he abruptly stopped -- and then wondered why he had.

"Why am I stopping? No one else stops," he said, chalking it up to his "Catholic school training."

CBS moderator Gayle King called him a "gentleman" for following the rules.

"Gentlemen don't get very well treated up here," he groused.

Biden was right: Tuesday night's moderation contributed to the most chaotic atmosphere of any of the 10 Democratic debates to date. CBS anchors at times lost control and let the candidates brawl -- and then selectively attempted to regain it by repeatedly interrupting candidates mid-answer.

The questions often seemed to ignore -- or be months behind -- the real points of tension in the Democratic presidential race. And the candidates often ignored the questions, as Biden did when he was asked to name the biggest misconception about him and offer his personal motto, and he answered in part by promising to appoint a black woman to the Supreme Court.