7 killed, more than 40 injured in 10 mass shootings across the U.S. over the weekend 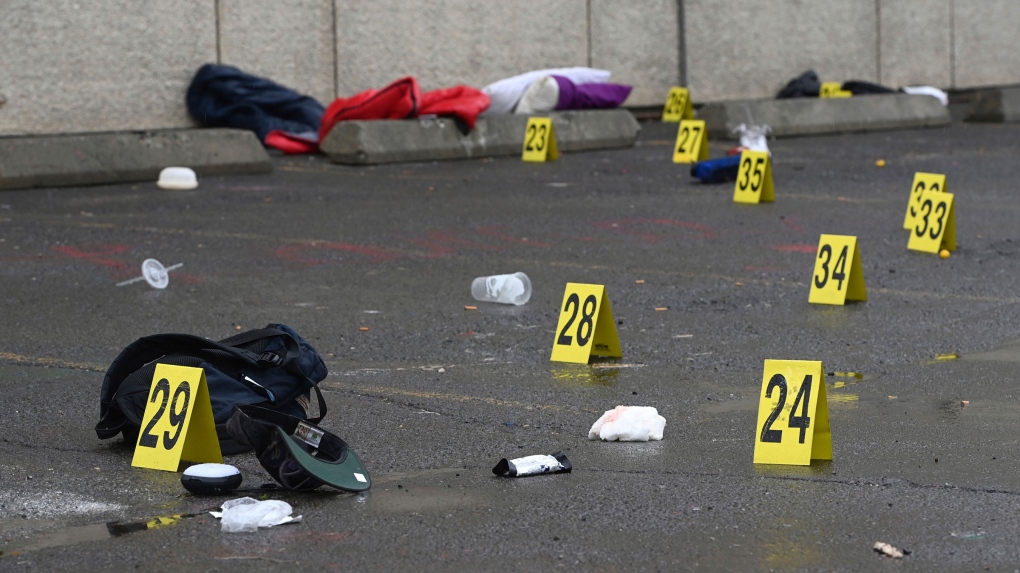 Police are investigating a shooting that left one dead and four injured in Anchorage Saturday. (Bill Roth/AP)

As Americans continue to come out of coronavirus isolation and states lift restrictions on gatherings, shootings continue to plague the nation, with ten mass shootings occurring in the U.S. since Friday night.

Seven people were killed and at least 45 were injured in the shootings, according to the Gun Violence Archive (GVA). Among the victims were at least two children, a 10-year-old and a 15-year-old, police said.

The latest shootings are among a streak of deadly violent weekends the nation has seen in the past few weeks.

Last weekend there were also 10 mass shootings across seven states that killed 12 people and injured 57 more, data from GVA shows.

CNN defines a mass shooting as four or more people shot, not including the shooter. A weekend is tracked from Friday afternoon through Sunday overnight.

On Saturday, four people were injured in a shooting in Newark, New Jersey, according to GVA.

Here are the other shootings that took place this weekend.

1 KILLED AND 3 OTHERS INJURED IN ATLANTIC CITY, NEW JERSEY

One person was killed and three others were wounded in a shooting Sunday evening in Atlantic City, New Jersey, the Atlantic County Prosecutor's Office said in a press release.

All the men were taken to a hospital where one died from his injuries, the prosecutor's office said.

Both the ACPO Major Crimes Unit and the Atlantic City Police Department are investigating. Officials are asking anyone with information to contact the Atlantic County Prosecutor's Office at 609-909-7800 or submit an anonymous tip online.

Police responded to a shopping mall parking lot in the Denver suburb of Aurora after receiving at least 50 calls reporting shots fired at a Juneteenth celebration just after 4 a.m. local time Sunday, a press release from the police department said.

Officers found one man suffering an apparent gunshot wound. He was taken to a hospital where he later died, police said. His identity has not been released.

Four other people -- three adult males and one adult female -- suffered injuries ranging from minor to serious and self-transported to local hospitals, according to the release. None of their injuries were considered life threatening.

Police said the Juneteenth celebration began "in an unnamed unit of the shopping mall."

"At some point earlier in the evening presumed organizers of the celebration began denying access to the unit. This led many attendees to gather in the parking lot," the release said.

Evidence indicates there were multiple shooters and more than 114 shell casings have been collected by investigators at the scene, according police.

Investigators are asking anyone with information to share their tips with Metro Denver Crime Stoppers at 720-913-STOP. A reward of up to $2,000 is being offered.

One person was killed and four others were injured during a Juneteenth celebration in Indiana early Sunday morning, the St. Joseph County Metro Homicide Unit (CMHU) said in a press release posted by CNN affiliate WSBT.

Officers arrived at a bar in Granger, Indiana, around 4 a.m. local time following reports of a shooting in the parking lot during a "Juneteenth Summer Bash," according to the affiliate.

The victim who died was a 26-year-old man, WSBT reported. Four others sustained non-life threatening injuries in the shooting.

Evidence collected at the scene "suggests multiple weapons were discharged in the area," police said.

Investigators are asking anyone with information to call CMHU at 574-235-5009, Crime Stoppers at 288-STOP or their local police department.

Officers responded to a report of a shooting just before 1:30 a.m. local time and found one man suffering from an apparent gunshot wound. He was taken to the hospital with life-threatening injuries, police said.

Three more victims self-transported to the hospital with gunshot wounds, including one who suffered life-threatening injuries, according to the police statement.

The shooting took place in a parking lot where a large crowd had gathered. Police are asking anyone with information regarding the shooting to contact investigators.

2 CHILDREN AMONG 8 INJURED IN DALLAS SHOOTING

Eight people were shot, including a 15-year-old and 10-year-old, after a gunfight broke out between partygoers at two separate celebrations in Dallas just after midnight Sunday, police said.

Police said they discovered two separate groups were having a parties in their own individual suites at the location and at one point, people from each party gathered behind the suites and there was an argument.

A physical fight broke out between the groups before they went back into their suites and began shooting at each other.

The 10-year-old was shot in the leg and at least one victim had to undergo surgery, according to police.

Police said none of the other injuries appear to be life-threatening.

No suspect information was given provided.

1 DEAD, AT LEAST 6 WOUNDED IN OAKLAND

One person was killed and at least six others were wounded in a shooting Saturday evening near Lake Merritt in Oakland, California, according to police.

Resources from the Oakland Police Department (OPD) were already in the area when the shooting occurred around 6:20 p.m., the department said.

Officers had been sent there to monitor public safety because a crowd of approximately 1,000 people had gathered at Lake Merritt, the OPD said in a release Sunday.

Seven people were shot during the incident. A 22-year-old man from San Francisco was pronounced dead after arriving at the hospital, police said.

Police arrested two men and recovered two firearms after officers observed the men running away from the scene immediately following the shooting, the OPD said.

OPD Public Information Officer Johnna Watson told CNN Sunday that police were working to determine if the two people arrested were connected to the shooting.

Crime Stoppers of Oakland and the Oakland Police Department are offering up to $40,000 for information leading to an arrest or arrests in this case.

Police in Alaska are investigating an early morning shooting that killed one person and injured four more in Anchorage Saturday.

All five people were taken to a hospital where one of the women died of her injuries.

Two people were killed and four others were injured in a shooting early Saturday morning in Baton Rouge, Louisiana, according to police.

Police found the victims in a parking lot after reports of a shooting.

According to police, there was an argument between unidentified individuals as a group of partygoers began to leave a concert at a nearby venue. During the argument, multiple people began shooting and six people were struck.

Two people died from their injuries and four others were transported to a nearby hospital and are expected to survive, police said.

Officers responded to reports of shots fired in the Dinkytown neighborhood, a spokesperson for the Minneapolis Police Department said in a statement.

When officers arrived, they found three men and two women with gunshot wounds that were not life threatening, police said. Two of the injuries were characterized as "graze" wounds. The victims were taken to a hospital.