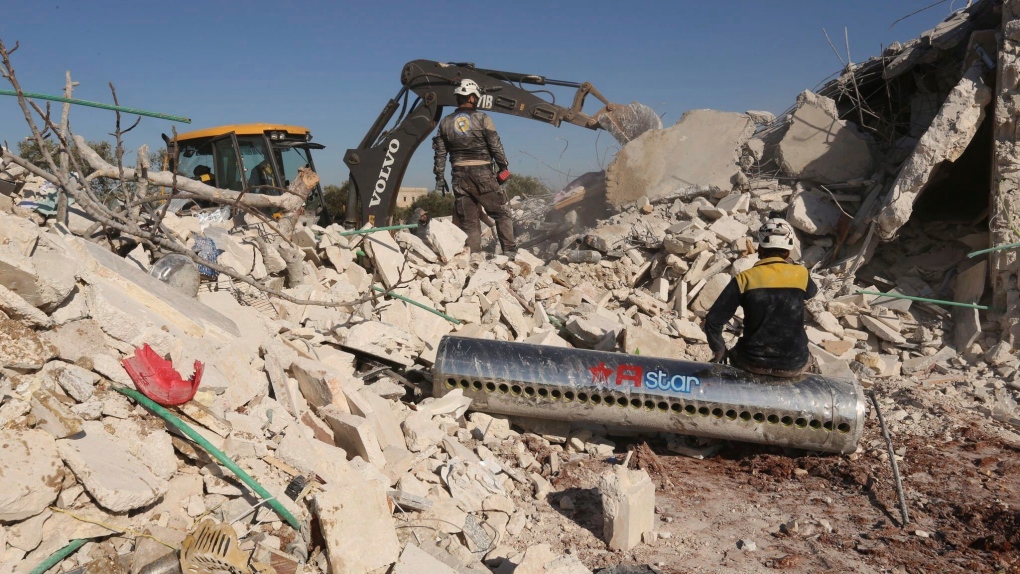 Syrian rescuers search for victim between rubble of a destroyed house after deadly airstrikes at the northern town of Sarmin, in Idlib province, Syria, Sunday, Feb. 2, 2020. (AP Photo/Ghaith Alsayed)

The exchange of fire inside Syria between Ankara and Damascus came hours after a large Turkish military convoy entered the northwestern province of Idlib, the last rebel stronghold in Syria. The fighting is likely to further increase tensions between the two neighbouring countries, as such direct clashes have been rare. It could also cause friction between Russia and Turkey, which have sought to co-ordinate their actions in Syria.

Earlier, Turkey's National Defence Ministry said the Turkish forces were sent to Idlib as reinforcements and were attacked there despite having previously given their co-ordinates to local authorities. It said Turkish forces responded to the attack, destroying targets.

Turkey's President Recep Tayyip Erdogan said five servicemen and three civilian contractors were killed by Syrian government forces. Speaking at a news conference on a visit to Ukraine, he accused Syria's ally Russia of "turning a blind eye" to the government offensive in Idlib. He added that Turkey has shown patience, but the "developments in Idlib have become increasingly intolerable."

Erdogan claimed the Syrian advance has pushed over 1 million people to flee toward the border with Turkey. The country already hosts 3.5 million Syrian refugees.

The U.N. provided a lower estimate Monday, saying that half a million people have been displaced since Dec. 1 due to the hostilities, around 80% of them women and children. U.N. Secretary-General Antonio Guterres' message to both Erdogan and Russian President Vladimir Putin was to "deescalate" the situation in Idlib, said U.N. spokesman Stephane Dujarric.

Idlib province is home to some 3 million people, many of them displaced from other parts of Syria in earlier bouts of violence.

The latest Syrian government offensive has been advancing since December into the country's last rebel stronghold, which spans Idlib province and parts of the nearby Aleppo region. Turkish troops are deployed in some of those rebel-held areas to monitor an earlier cease-fire that was agreed to, but has since collapsed.

Erdogan earlier said Turkish warplanes were involved in Monday's clashes and claimed that there were between 30 and 35 casualties on the Syrian side, but offered no evidence. He said Russia was told that Ankara would not stand for any "situation where we are prevented" from responding to Syrian assaults.

"It is not possible for us to remain silent when our soldiers are being martyred," Erdogan said.

The deaths were one of the highest single-day tolls for Turkish troops in Syria. Ankara has lost scores of military personnel in the Syrian war.

The exchange occurred near the Syrian flashpoint town of Saraqeb, according to the the Britain-based Syrian Observatory for Human Rights, a war monitoring group. It added that Turkish troops shelled Syrian army positions in three provinces, killing eight soldiers in Idlib, three in Latakia province and two in the Hama region.

However, Syria's state news agency SANA said government forces captured two new villages on the way to Saraqeb. It added that as Syrian troops were chasing insurgents, four Turkish soldiers were killed and nine wounded triggering a Turkish retaliation -- but it claimed there were no casualties among Syrian troops.

The Russian Defence Ministry said Turkey had failed to notify the Russian military about troop movements overnight in Idlib and that the Turkish troops got hit by Syrian fire that was directed at "terrorists" -- a reference to al-Qaida-linked militants -- west of Saraqeb.

Relations between Turkey and Syria have deteriorated sharply since Syria's civil war began in 2011. Syria accuses Turkey of undermining its security by allowing thousands of foreign fighters to come battle the Syrian army. Idlib province is currently dominated by al-Qaida-linked militants.

Shortly before sunset on Monday, Syrian troops also captured the village of Nairab, reaching another highway that links the coastal city of Latakia with Aleppo, Syria's largest. The advance was reported by the Observatory and other opposition activists. Government forces are now on the western edge of Saraqeb and about 8 kilometres (5 miles) from the provincial capital of Idlib, which bears the same name.

Opposition activists did not say who was behind the airstrikes that killed nine civilians in rebel-held parts of northern Syria. The nine were on a minibus carrying people fleeing the violence near the village of Kfar Naha in Aleppo province, according to the Observatory and Baladi news, an activist collective. Four children, three women and two men were killed, according to paramedics.

The World Health Organization said Monday that at least 53 health facilities had suspended services in northwestern Syria since the beginning of the year because of the violence and threats of attacks. It added that on average, the WHO and its partners reach 800,000 people in northwest Syria every month "but the situation on the ground is changing by the hour."

Associated Press writers Bassem Mroue in Beirut, and Vladimir Isachenkov and Daria Litvinova in Moscow contributed to this report.