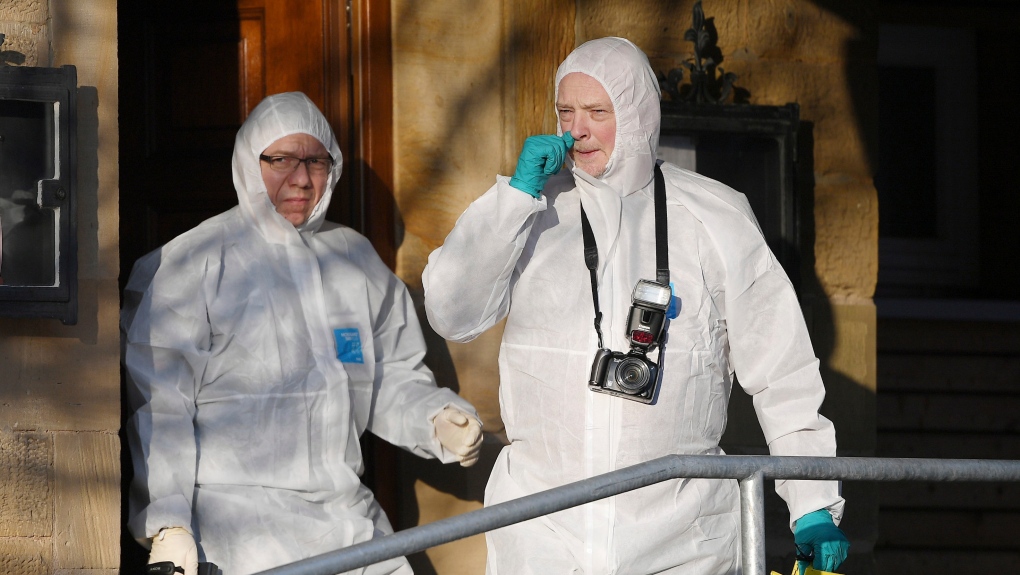 Police at the scene after shots were fired in Rot Am See, Germany, Friday, Jan. 24, 2020. (Sebastian Gollnow/dpa via AP)

BERLIN -- Six people were killed and another two wounded in a shooting in the southwestern German town of Rot am See on Friday, police said. The suspect's parents were among the dead and the other victims also were believed to be relatives.

A man called police shortly after 12:45 p.m. (1145 GMT) and told them he had killed several people, regional police chief Reiner Moeller said at a news conference.

Police kept the man on the line and, when they arrived at the scene several minutes later, arrested a 26-year-old German national as the suspect in the slayings, Moeller said.

Officers found the bodies of six people -- three women and three men, ages 36 to 69 -- in and behind a building where a bar is located.

Another two people were hurt, and one of them has life-threatening injuries, Moeller said. The suspect also threatened two children, ages 12 and 14.

The suspect had a license to own firearms as a shooting club member, Moeller said. Authorities believe he used a semi-automatic pistol.

"We can't say anything so far about the motive," he said. "Because of the victims and the wounded, we believe it was a family drama, since according to what we know at present all were related to each other."

The suspect's mother and father were among the dead, the police chief said. Police were working to clear up how the others were related.

They planned to question the suspect and were waiting for his lawyer.

Rot am See is located about 170 kilometres (105 miles) northwest of Munich. It is a town of some 5,300 people in a rural area of Baden-Wuerttemberg state.