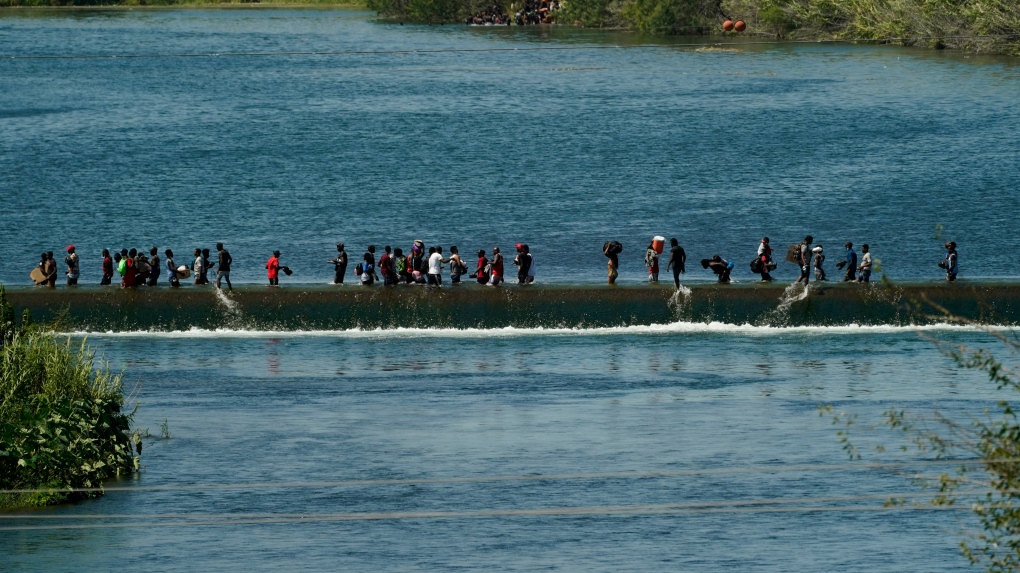 Haitian migrants use a dam to cross to and from the United States from Mexico, Friday, Sept. 17, 2021, in Del Rio, Texas. Thousands of Haitian migrants have assembled under and around a bridge in Del Rio presenting the Biden administration with a fresh and immediate challenge as it tries to manage large numbers of asylum-seekers who have been reaching U.S. soil. (AP Photo/Eric Gay)

MEXICO CITY -- About 500 Haitians headed toward the U.S. border were ordered off buses by Mexican immigration authorities in the northern state of Tamaulipas Friday, and some tried to continue the journey on foot.

Immigration agents and National Guard officers stopped the buses at a highway checkpoint near the town of San Fernando, about 120 miles (200 kilometres) south of the Texas border, the state government said in a press release.

Mexico has turned back Haitian migrants trying to walk through southern Mexico. But 8,000 to 12,000 people, mainly Haitians, have already walked across the Rio Grande river and have assembled under and around a bridge in the small Texas border town of Del Rio. Some of those migrants may have already been in northern Mexico for some time.

The migrants stopped in Tamaulipas told local media they had boarded about 15 buses in the city of Poza Rica, Veracruz, and were headed to Reynosa, Tamaulipas, across the border from McAllen, Texas.

The migrants included some families with children. State police cars accompanied the migrants part of their walk to avoid accidents on the highway.

The town of San Fernando is known for the 2010 massacre of 72 migrants by the Zetas drug cartel.

Residents there offered the Haitians food.

On Wednesday, another group of Haitians blocked a roadway in Tamaulipas in protest after they said federal authorities were trying to detain and deport them.