5 questions about Ukraine you were too shy to ask 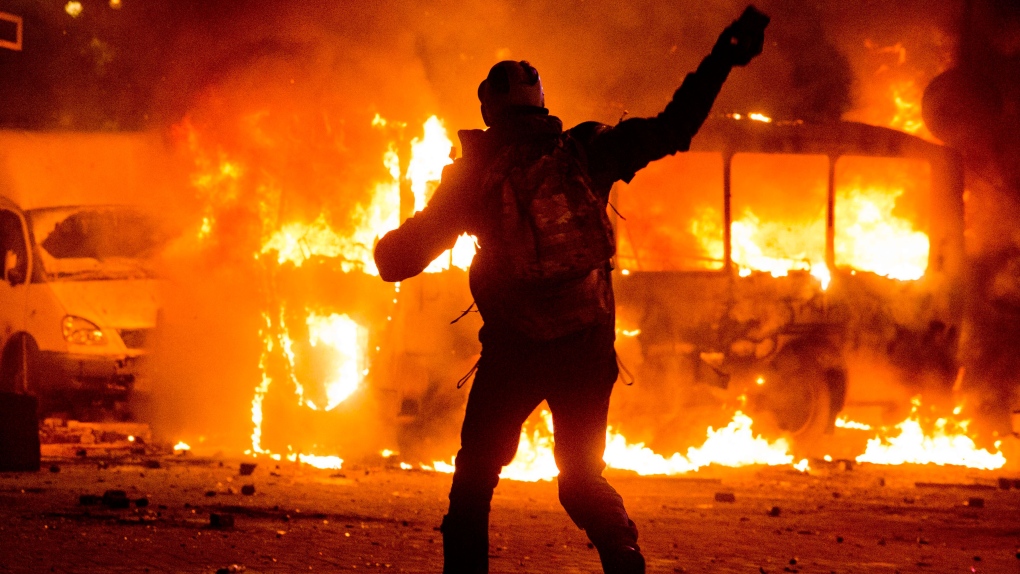 A protester throws a stone towards a burning police bus in front of him, during clashes with police, in central Kyiv, Ukraine, Sunday, Jan. 19, 2014. (AP / Evgeny Feldman)

Since the anti-government protests began in Ukraine three months ago, the crisis has escalated into bloodshed on Kyiv’s streets and the ousting of President Viktor Yanukovych.

But what’s behind the demonstrations? And where does Russia fit into all of this? Here are the answers to five essential questions about the situation in Ukraine:

Why are Ukrainians protesting?

The protests began in November, after Yanukovych rejected a trade deal with the European Union in favour of closer economic ties with Russia.

The EU deal was in the works for some time, but it reportedly fell apart after Yanukovych had a long talk with Russian President Vladimir Putin.

Citizens who were in favour of fostering a closer relationship with the EU and the West began holding peaceful demonstrations in Kyiv’s Independence Square. But as demonstrators began clashing with police and the government tried to enforce what some described as brutal anti-protest laws, the situation escalated.

Dozens of protesters were killed last week alone as gunfire was exchanged and snipers were brought in to shoot at the crowds.

How did Yanukovych come to power?

Yanukovych was a controversial figure well before the EU deal fiasco. When he ran for president in 2004, there were allegations that the run-off vote was rigged in his favour. Nationwide protests ensued and the Orange Revolution was born. The courts ultimately annulled the results of the run-off vote and Yanukovych’s opponent, Viktor Yushchenko, was declared the winner in a re-vote.

Yanukovych successfully ran for president again in 2010 and that election was deemed fair by Ukrainian and international observers. But allegations of corruption continued to follow him.

After last week’s deadly protest in Kyiv, the Ukrainian parliament voted to remove Yanukovych from office.  He denounced the vote as a “coup d’etat” and said he would not resign.

Where is he now?

Yanukovych is reportedly hiding somewhere in Ukraine’s pro-Russian Crimean peninsula. After he fled Kyiv, the acting government issued a warrant for his arrest on Monday, accusing him of mass murder in connection with dozens of civilian deaths.

As soon as Yanukovych left, thousands of protesters and ordinary Ukrainians descended on his opulent mansion just outside of Kyiv. Many expressed disgust at the ostentatious display of wealth on the property Yanukovych tried to keep secret.

Those who got inside described lavishly decorated rooms with marble floors, gold-covered railings and crystal chandeliers. Yanukovych also reportedly has a large luxury car collection and a private zoo on the property.

What role does Ukraine’s history play in all of this?

The territory that is now modern Ukraine has had many different rulers over the centuries, but Russians made the biggest impact. Between the Russian Empire of the 19th century and Soviet rule in the 20th, Ukraine became divided along ethnic and linguistic lines.

Southeastern parts of Ukraine are considered to be more pro-Russian because of deeper cultural ties with the country and the number of people who list Russian as their first language. In the northwest, Ukrainian is primarily spoken, and that’s where most of the anti-government protests are taking place. Many people in those regions are in favour of the EU deal.

What is Russia’s role in Ukraine?

Russia has a big economic and political influence in Ukraine. Billions of Russian dollars are invested in the country and millions of Ukrainians work in Russia.

Since Vladimir Putin backed Yanukovych during the Orange Revolution, he has a strong influence over the now-ousted leader. Putin also wants Ukraine to sign a free-trade agreement with several other Soviet states.