5 dead, including baby, after German man drives car into crowd 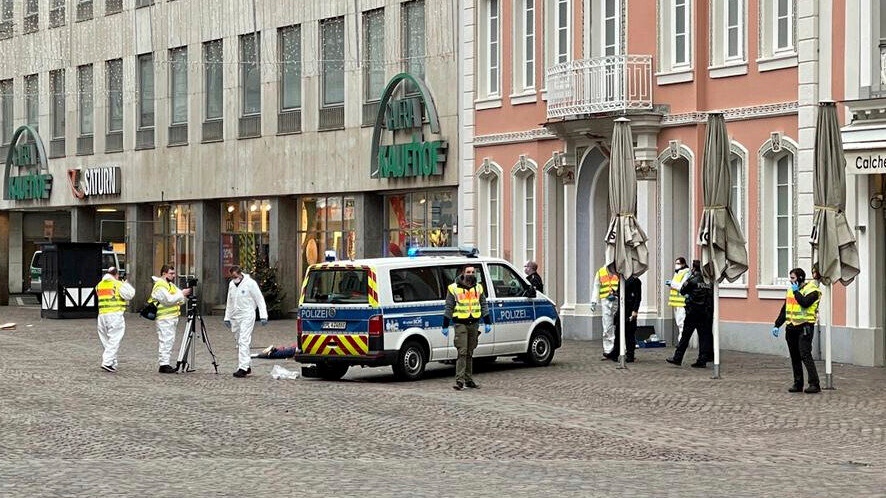 Police officers are pictured at the scene of an incident in the city of Trier, Germany, Tuesday, Dec 1, 2020. German police say two people have been killed and several others injured in the southwestern German city of Trier when a car drove into a pedestrian zone. Trier police tweeted that the driver had been arrested and the vehicle impounded. (AP Photo/Sebastian Schmitz, lokalo.de)

BERLIN -- A man zig-zagged an SUV at high speed through a pedestrian zone in the southwestern German city of Trier on Tuesday, killing four people, including a 9-month-old child, and seriously injuring 15, officials said.

The driver, identified as a 51-year-old German man born in Trier, was arrested at the scene and the vehicle was impounded, Trier police said.

The suspect, whose name was not released in line with German privacy laws, had no fixed address and had been living in recent days in the Land Rover that a friend had loaned him, which was used in the attack, said prosecutor Peter Fritzen, who was heading the investigation.

He was being interrogated by police and was to undergo a psychiatric examination, Fritzen said, adding that a doctor had recently reached the preliminary conclusion the man could be suffering from mental illness.

“We have no indication that there was any kind of a terrorist, political or religious motive that could have played a role,” he told reporters.

The suspect had also consumed a “not insignificant” quantity of alcohol before the incident and was well above the legal limit, he added.

Mayor Wolfram Leibe, who was brought to tears during the day talking about the horrific scene, said it was difficult to come to grips with what had happened.

“I can't understand how someone gets the idea to drive through the city centre with an SUV to kill people,” he said. “Kill people - a baby, 9 months old to a woman 72 years old; what did these people do? They just wanted to go to the city, shop, and now they are dead.”

Four people were still in life-threatening danger in the hospital and five others suffered serious injuries, while another six had less serious injuries, state Interior Minister Roger Lewentz said. The others killed were identified as a 25-year-old woman and a 45-year-old man from Trier; the baby's mother was among those hospitalized. Police said the oldest victim was aged 73.

“This incident has shaken all of Germany,” Lewentz said.

Police were called shortly before 2 p.m. with reports of the attack.

Lewentz commended security forces on their reaction, saying that they had located the car, which had stopped at the side of the street, and taken the suspect into custody within four minutes of receiving the first call.

The driver, who was alone in the car, resisted arrest but was overpowered by police, authorities said.

In a video posted by a local media outlet purportedly showing the arrest, police could be seen pinning a man down on the sidewalk next to a car with Trier license plates. The authenticity of the video could not immediately be verified and it was taken down shortly after police tweeted a request that people do not share photos and videos of the scene.

Footage from the scene showed people outside a shop apparently helping someone on the ground lying among scattered debris.

Rhineland-Palatinate state governor Malu Dreyer, who comes from Trier, condemned the attack as a “brutal act.”

“It was a really, really terrible day for my hometown,” Dreyer told reporters after visiting the scene.

“Our thoughts are with the relatives of those killed and with the numerous injured, and with everyone currently on duty caring for them,” he said.

Trier is about 200 kilometres (120 miles) west of Frankfurt, near the border with Luxembourg. The city of about 110,000 people is known for its Roman gate, the Porta Nigra, which is near the scene of the incident, and as the birthplace of Karl Marx.

Geir Moulson contributed to this report.