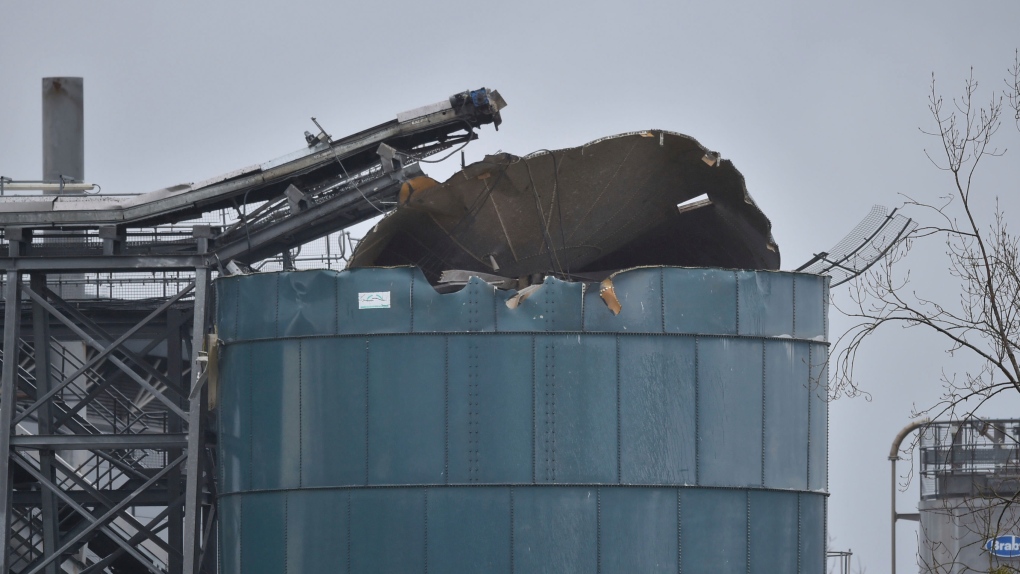 The warehouse where emergency services attend to a large explosion in Bristol, England, Thursday Dec. 3, 2020. (Ben Birchall/PA via AP)

LONDON -- Four people died following an explosion in a silo that holds treated biosolids at a wastewater treatment plant near the southwest England city of Bristol, police said Thursday.

Three Wessex Water employees and one contractor died in the incident, which is not being treated as terror-related, Avon and Somerset Police Chief Inspector Mark Runacres said at a media briefing. A fifth person was injured during the explosion at the plant in the industrial area of Avonmouth, but the injuries are not considered life-threatening, Runacres said.

"The fire service led the rescue operation but sadly, despite the best efforts of all those involved, we can confirm there have been four fatalities," he said.

Runacres would not speculate on the cause of the explosion. He said it took place in a silo holding organic matter from sewage before it "is recycled to land as an organic soil conditioner."

He said the explosion did not create any ongoing concerns for public safety.

British Prime Minister Boris Johnson said "our hearts go out" to the victims and their families.

"Deeply saddened to learn that four people have lost their lives in the water works explosion in Avonmouth," Johnson said on Twitter.

Wessex Water Chief Executive Colin Skellett said he was "devastated" by the incident, and the company is working to understand what happened and why.

Sean Nolan, who witnessed the aftermath of the explosion, said he had heard a "boom and echo" and at first thought it was from a a vehicle collision.

The Avon Fire and Rescue Service was alerted at 11:22 a.m. to the "very challenging" incident in Avonmouth, located near Bristol, about 120 miles (195 kilometres) west of London. Six fire engines and rescue dogs were soon on the scene.

"Luckily, our local fire station is not too far from here so we had crews in attendance very, very quickly and they were able to gain an element of situational awareness," rescue service manager Luke Gazzard said.