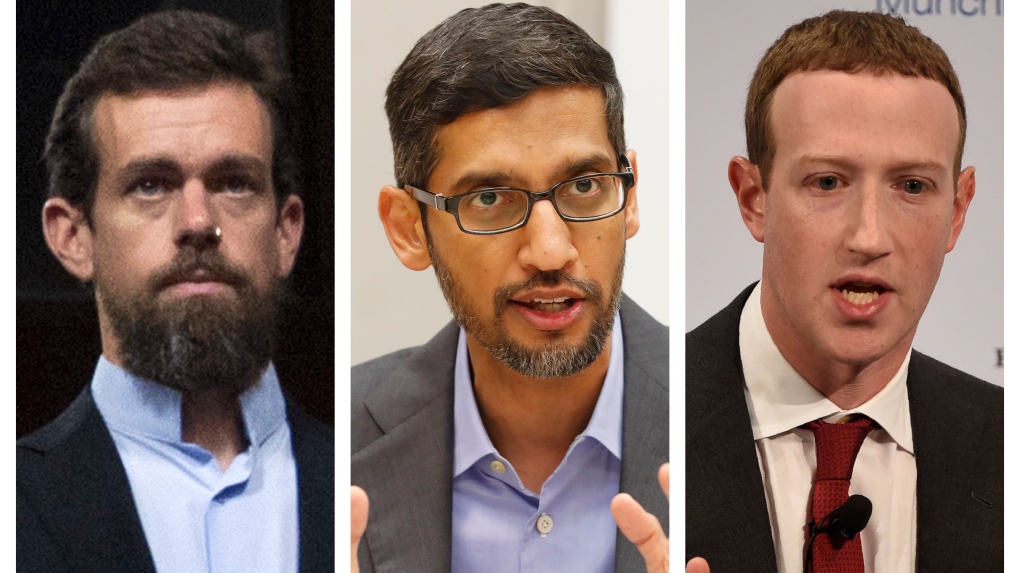 WASHINGTON -- The CEOs of Twitter, Facebook and Google are facing a grilling by Republican senators making unfounded allegations that the tech giants show anti-conservative bias.

The Senate Commerce Committee has summoned Twitter CEO Jack Dorsey, Facebook's Mark Zuckerberg and Google's Sundar Pichai to testify for a hearing Wednesday. The executives agreed to appear remotely after being threatened with subpoenas.

With the presidential election looming, Republicans led by President Donald Trump have thrown a barrage of grievances at Big Tech's social media platforms, which they accuse without evidence of deliberately suppressing conservative, religious and anti-abortion views.

The chorus of protest rose this month after Facebook and Twitter acted to limit dissemination of an unverified political story from the conservative-leaning New York Post about Democratic presidential nominee Joe Biden, an unprecedented action against a major media outlet. The story, which was not confirmed by other publications, cited unverified emails from Biden's son Hunter that were reportedly disclosed by Trump allies.

Beyond questioning the CEOs, senators are expected to examine proposals to revise long-held legal protections for online speech, an immunity that critics in both parties say enables the companies to abdicate their responsibility to impartially moderate content.

The Justice Department has asked Congress to strip some of the bedrock protections that have generally shielded the tech companies from legal responsibility for what people post on their platforms. Trump signed an executive order challenging the protections from lawsuits under the 1996 telecommunications law.

"For too long, social media platforms have hidden behind Section 230 protections to censor content that deviates from their beliefs," Sen. Roger Wicker, R-Miss., the Commerce Committee chairman, said recently.

In their opening statements prepared for the hearing, Dorsey, Zuckerberg and Pichai addressed the proposals for changes to so-called Section 230, a provision of a 1996 law that has served as the foundation for unfettered speech on the internet. Zuckerberg said Congress "should update the law to make sure it's working as intended."

"We don't think tech companies should be making so many decisions about these important issues alone," he said, approving an active role for government regulators.

Dorsey and Pichai, however, urged caution in making any changes. "Undermining Section 230 will result in far more removal of online speech and impose severe limitations on our collective ability to address harmful content and protect people online," Dorsey said.

Pichai urged lawmakers "to be very thoughtful about any changes to Section 230 and to be very aware of the consequences those changes might have on businesses and consumers."

Assistant Attorney General Stephen Boyd told congressional leaders in a letter Tuesday that recent events have made the changes more urgent. He cited the action by Twitter and Facebook regarding the New York Post story, calling the companies' limitations "quite concerning."

The head of the Federal Communications Commission, an independent agency, recently announced plans to reexamine the legal protections, potentially putting meat on the bones of Trump's order by opening the way to new rules. The move by FCC Chairman Ajit Pai, a Trump appointee, marked an about-face from the agency's previous position.

Social media giants are also under heavy scrutiny for their efforts to police misinformation about the election. Twitter and Facebook have slapped a misinformation label on content from the president, who has around 80 million followers. Trump has raised the baseless prospect of mass fraud in the vote-by-mail process.

Democrats have focused their criticism of social media mainly on hate speech, misinformation and other content that can incite violence or keep people from voting. They have criticized Big Tech CEOs for failing to police content, homing in on the platforms' role in hate crimes and the rise of white nationalism in the U.S.

The companies reject accusations of bias but have wrestled with how strongly they should intervene. They have often gone out of their way not to appear biased against conservative views -- a posture that some say effectively tilts them toward those viewpoints. The effort has been especially strained for Facebook, which was caught off-guard in 2016, when it was used as a conduit by Russian agents to spread misinformation benefiting Trump's presidential campaign.

The unwelcome attention to the three companies piles onto the anxieties in the tech industry, which also faces scrutiny from the Justice Department, federal regulators, Congress and state attorneys general around the country.

Last week, the Justice Department sued Google for abusing its dominance in online search and advertising -- the government's most significant attempt to protect competition since its groundbreaking case against Microsoft more than 20 years ago.

With antitrust in the spotlight, Facebook, Apple and Amazon also are under investigation at the Justice Department and the Federal Trade Commission.