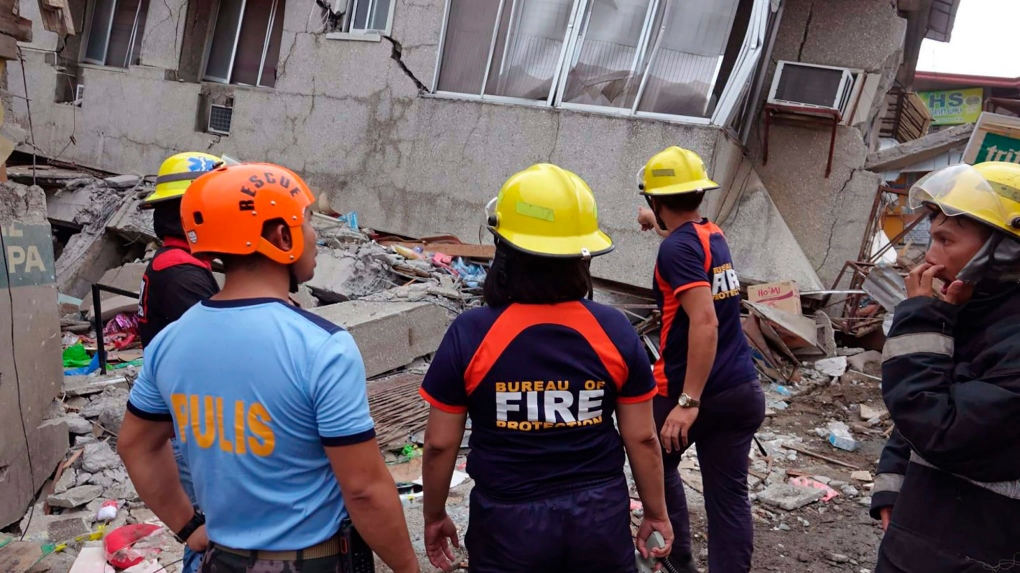 PADADA, PHILIPPINES -- Rescuers pulled out two bodies Monday from a three-story building that collapsed in a strong earthquake in the southern Philippines and scrambled to find at least seven more people who were trapped inside.

Army troops, police, firefighters and volunteers, armed with sound and motion detectors, located a third body in the rubble of the building in Davao del Sur province's Padada town but could not immediately extricate the remains pinned in slabs of cement, Padada Mayor Pedro Caminero said.

At least five people died in Sunday's magnitude 6.9 quake that struck Padada and outlying rural towns, cities and provinces in a region that has been battered by three deadly earthquakes in recent months. A child died after being hit by a collapsed wall in her house and a woman in her 70s died from a heart attack during the quake, officials said.

"We're looking for about seven more," Caminero said by phone from Padada.

Distraught relatives waited in a cordoned area as rescuers worked overnight in search of their relatives.

Several shoppers managed to dash out of the building, which housed a grocery store, as the ground shook, including a number who were escorted out with injuries.

A total of 84 people were injured in the quake, officials said.

A city and four towns near the quake's epicenter were still without power Monday, and classes were cancelled in a broad area to give time for inspections of school buildings.

The Davao region has been hit by at least three powerful earthquakes in recent months, causing several deaths and scores of injuries and badly damaging houses, town halls, hotels, malls and hospitals.

The Philippine archipelago lies on the so-called Pacific "Ring of fire," an arc of faults around the Pacific Ocean where most of the world's earthquakes occur. It's also lashed by about 20 typhoons and other severe storms each year, making the Southeast Asian nation of more than 100 million people one of the world's most disaster-prone countries.