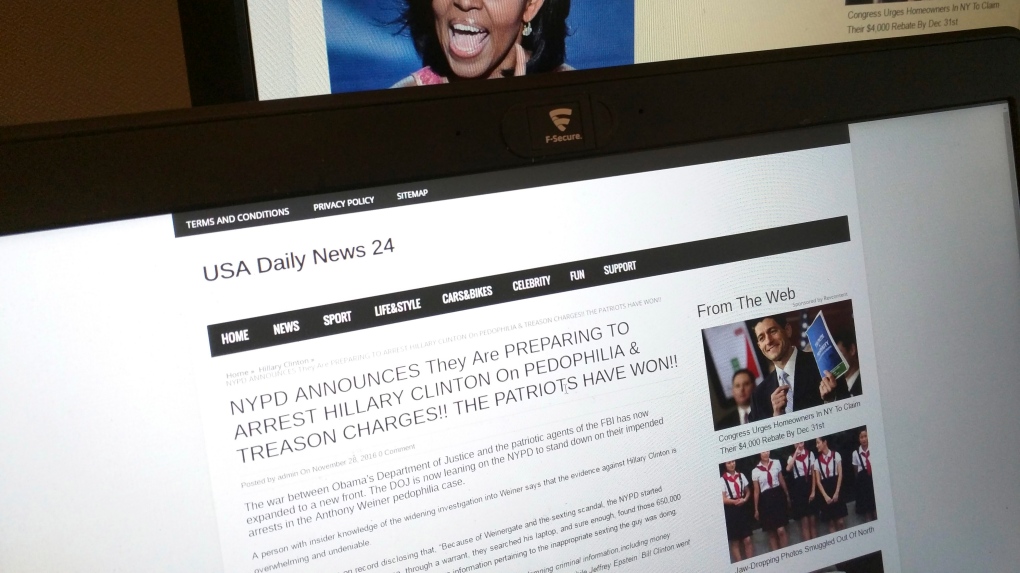 2016: A year in which “post-truth” was declared Oxford Dictionaries’ word of the year and when fake news became a force in a U.S. presidential election.

Oxford defined post-truth as: “Circumstances in which objective facts are less influential in shaping public opinion than emotional appeals.”

That was never more apparent than in the campaign and election of Donald Trump.

The proliferation of fake news may be among a “whole bunch of new normals,” when it comes to the media landscape, said Nick Taylor-Vaisey, president of the Canadian Association of Journalists.

“Whenever you write about the U.S. election, you have to confront fake news. And there will be no end to it. It’s part of the internet now. Hillary Clinton was the target for a while but there will be plenty of other online assaults to come.”

Sixty-four per cent of American adults surveyed said fake news cause “a great deal of confusion” about basic facts of current events, according to data published Dec. 15 by Pew Research Center.

Fake news has become an “epidemic,” Clinton said in a speech about a month after her loss.

Without citing it directly, she is believed to have been pointing to a Dec. 4 shooting inside a Washington pizza shop that had become the target of a fake news conspiracy story. A North Carolina man was arrested after police say he was drawn to the pizza shop because of a fake story that it was the headquarters of a child sex ring operated by Clinton and her campaign.

Clinton said fake news "is not about politics or partisanship. Lives are at risk. Lives of ordinary people just trying to go about their days to do their jobs, contribute to their communities."

In some cases, fake newsers just got a charge out of misleading people. Others wanted to make a quick buck and were incredulous when their fictions added up to streams of clicks and dollars. But in darker cases, fabrications pushed a political agenda.

“I’d love to see a comprehensive look at this culture,” said Taylor-Vaisey, who is a digital editor at Maclean’s. “Some of them worked hard to make a website look real and write in an authentic voice. They set out to fool people. There was definitely something more than fun in mind for them.”

One of the biggest fake news stories of the year came in November and claimed U.S. President Barack Obama was ending the pledge of allegiance in schools. It still makes the rounds online long after it’s been proven a total concoction.

The trouble is that in an era of dwindling resources, media organizations are forced to compete for eyeballs with bogus news stories such as the pledge of allegiance tale, while also spending time debunking them, says Quan-Haase, a professor at Western University in London, Ont.

“It’s not just about identifying fake news as fake, but keeping fake news from becoming news. A lot of important news was drowned out by that story.”

Among the most enduring fake news stories was that Clinton had paid protesters to appear at Donald Trump rallies. Another, shared or commented on 140,000 times was that the Democratic nominee would be indicted by the FBI in 2017.

Some were produced domestically, while others came from abroad. But they all featured outrageous headlines and sophisticatedly used social media to amplify the reach.

The scary part is, says Quan-Haase, research shows that many people believe whatever story they hear first, regardless of newer information that debunks it.

“It’s very hard to explain. It just seems that people are trying to make sense of a very rich information world. They create schemas and it’s very difficult to get those rewritten,” she said.

“We’re seeing that fake news can have a real impact on the thinking about critical issues. These stories were framing some of the discourse.”

The phony news was targeted at and embraced by those who are already deeply suspicious of the mainstream media, says Quan-Haase. Those tend to be people on the far right, who are anti-establishment and view much of the media as too liberal.

Incidental news consumers are also susceptible to falling for fake news. They aren’t habitual news readers but instead, click on what intrigues them on their social media feeds. The more clicks, the more highly displayed the story becomes and the more likely to be seen by others skimming social media.

A false story saying Trump won the election’s popular vote made it to the top of the Google news search. Facebook’s Trending Feature even featured fake news.

Facebook CEO Mark Zuckerberg initially rejected any blame aimed at his platform for distributing fake news, saying the idea it may have influenced the election was a "crazy idea" and 99 per cent of the site's content is true. But the company - where almost half of Americans now get their news, according to some surveys -  has shifted more recently to acknowledging it was wrong to not have standards for news content.

Both Facebook and Google have promised to ban the generators of fake news from collecting ad revenue and have vowed to do a better job of rooting out the fake stuff and suppressing it. On Dec. 15, Facebook announced some updates to its platform it is testing, aimed at what it called the "worst of the worst" hoaxers. They include making it easier to report fake news, working with third-party fact-checking organizations, flagging disputed stories with a warning for those sharing them, and eliminating the ability to spoof domains.

Facebook said "it's important to us that the stories you see on Facebook are authentic and meaningful" and that it will "keep working on this problem for as long as it takes to get it right."

But it has previously ruled out hiring editors or blacklisting fake news sites.

Elliot Schrage, the company's vice-president of global communications, marketing and public policy, told a December conference about the presidential election at Harvard University that it would be a "dangerous road" for a company to decide what's "newsworthy."  Instead, he said Facebook would concentrate on building tools to help users "share thoughtfully and responsibly."

“There is a moral obligation to do that,” says Quan-Haase. “They can no longer ignore the ethical standards of media outlets to do fact-checking because they are central to the diffusion of news.”

But critics of Facebook's new approach say users may manipulate the flag fake news tool to report stories they ideologically oppose. And in the "echo chamber" of social media, where people tend to follow others who think like them and platforms gear content users see based on what it thinks they want to see, fake news can still proliferate, say some media and technology pundits.

One bogus story about an investigator in the Clinton email investigation mysteriously dying in a suspicious fire was the only story on a fake Baltimore Gazette website. If you tracked the address listed for the outlet, you ended up in a parking lot. Few ever check that far, especially if a fake story taps into an already-held belief, says Quan-Haase.

“So if I believe that Hillary is crooked, these stories just confirm it.”