2014: The year women joined forces online and the Internet listened 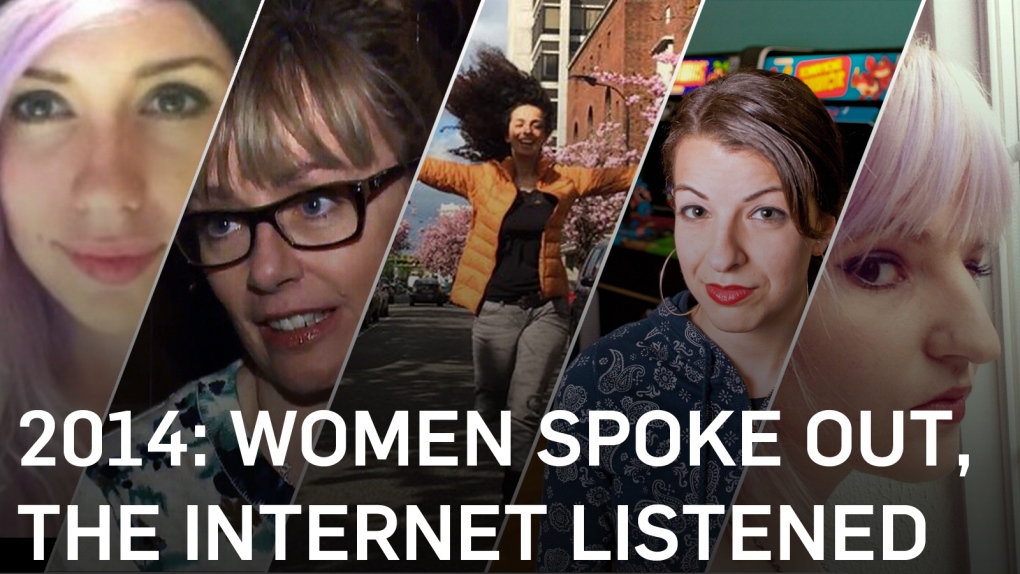 She wasn't looking to start anything. Like many women online this year – from the online troll-slayers, or the women who said they’d #beenrapedneverreported -- it started with something small and personal, and grew into something greater when other women connected with the message.

In this instance, when exiled Iranian journalist Masih Alinejad posted a photo of herself running down a sunny London street with her mop of brown curls flying behind her, she didn't realize she'd be starting an online movement.

In her original Facebook post, Alinejad lamented that women in her native Iran could not enjoy this small freedom because of a decades-old law requiring them to keep their hair covered in public. She asked her friends back home if they found private moments in their lives to enjoy these types of "guilty freedoms."

Soon enough, she was bombarded with photos from Iranian women -- all flouting the law requiring them to cover their hair. She began carefully sharing their photos and stories under the hashtag #MyStealthyFreedom.

The campaign, which continues to this day, found wide support -- in Iran and around the world, from women and men.

While feminists have long encouraged women to develop their voices, they've also called on the media, academia and other institutions not to ignore the voices of half the human race.

But this year, women found ways to make their voices heard without having to rely on traditional media channels. From the GamerGate controversy to the Jian Ghomeshi allegations, women found power, support and community in digital spaces.

Online forums, blogs and social media have become critical spaces for people to discuss issues which may have been overlooked by the mainstream media, says Carrie Rentschler, a women's studies professor at McGill University.

"Social media platforms and online platforms in general have become key places," she told CTVNews.ca in a phone interview. "When things aren't in the mainstream press, we see all of these other debates happening in social media channels."

But there can still be a high and painful cost for those women who are among the first to speak out.

After the "Stealthy Freedom" campaign took off, conservatives in Iran attacked Alinejad's character in the media, even accusing her of working for a foreign government.

Then in June, Iranian state TV aired a false report alleging that Alinejad had been gang-raped in front of her son at a London subway station.

"According to their imagination, any women who do not believe in the hijab deserve to be raped," she said.

Despite the personal attacks, Alinejad won’t halt the campaign. She insists that she is not encouraging Iranians to shed their headscarves, but is simply giving them a platform to be heard.

In early December, she posted a video message to her followers on the campaign's Facebook page.

"We dedicate this video to all those who disdained us, mocked us, insulted and accused us. We raised our censored voice louder than ever," she wrote. "We don't want to remain stealthy forever… we keep shouting our demand for freedom until it is also heard in our own country."

This year, Canadian-American media critic Anita Sarkeesian also became a target – in this case, of a threatened attack – because of her views.

Sarkeesian cancelled a scheduled talk at Utah State University in October, after learning that the school wouldn't screen for concealed weapons despite a death threat made against her.

She is part of a movement which examines the sexism and harassment of women in video games and gaming culture. Many of these women have been subjected to vitriolic online attacks and have been threatened with violence for their views.

After learning of an anonymous letter threatening an attack similar to the Montreal Massacre, Sarkeesian took to Twitter to share her side of the story, pointing fingers at the school and authorities for their refusal to act.

"Online threats against women are real, pervasive and must be taken seriously by law enforcement agencies and educational institutions alike," she tweeted.

Pearce decided to “out” some of the men who leave messages threatening her with rape on her Facebook page.

After receiving the threats, the 21-year-old tracked down the young men’s mothers and showed them what their sons had written.

In November, Pearce shared on Twitter an exchange she had with one particular mother.

She told AlterNet that she decided to notify the boys' families once she realized how young many of her harassers were, and that they could learn from the experience.

"I only realized quite recently that the majority of sexually explicit comments or messages I get come from young boys, not adult men," she said. "This basically means there's a different set of rules… I thought about it, and the obvious solution was to try to find their family, via Facebook, and ask that they address the issue."

When Canadian actress Lucy DeCoutere first went public with allegations of assault against former CBC radio host Jian Ghomeshi, she was bracing for the worst. Instead, she was surprised to see an outpouring of support come her way.

Within hours, the hashtag #IBelieveLucy began to trend on Twitter, with many on social media standing in solidarity with the "Trailer Park Boys" actress.

Thank you @lucydecoutere and the other women who spoke out against #JianGhomeshi. Your courage is inspiring. I stand with you. #ibelievelucy

#IBelieveLucy because I've had enough of victim blaming. Women are too afraid to speak out because they don't want to be accused of lying.


"It's not about me," she later told CTV News about the hashtag that emerged. "I've attached my name to the story, so what people are believing is (my) story."

After DeCoutere shared her story, other women came forward and filed complaints with the police. Ghomeshi was eventually charged with four counts of sexual assault and one count of overcome resistance – choking in November.

Rentschler said survivors of violence can find surprising communities of support on social media, with the end result being that the survivor's voice has been "registered" a little bit more.

"One of the things I would say about 2014, is that I'm sensing that more people believe survivors," she said.

Even as women in the Ghomeshi case began to share their stories with the media – many anonymously -- some questioned why they weren't instead going to police. Similar questions were also raised after video footage was released that showed NFL running back Ray Rice knocking out his then-fiancee in an elevator.

There are many reasons why women do not report cases of assault, and women from around the world expounded on these reasons using the hashtags #BeenRapedNeverReported and #WhyIStayed/#WhyILeft.

From a fear of being stigmatized to financial and familial concerns, women on Twitter shared some of the problems they encountered when attempting to leave their abusive partners and reporting cases of assault to police. Their succinct stories, delivered in short 140-character tweets, were powerful and telling.

He was my grandfather. I was 3-9 yo. Cops wanted to know why I waited so long to report it. #BeenRapedNeverReported

My mom had 3 young kids, a mortgage, and a PT job. My dad had a FT paycheck, our church behind him, and bigger fists. #WhyIStayed


While this type of "hashtag activism" has been ridiculed, it seems to be here to stay. "I think this is where a lot of people are going these days to talk about feminist issues and to share feminist forms of knowledge about violence," Rentschler said.

Last week social media users used the hashtag #DalhousieHatesWomen to call on the University to take a stronger stand against a group of male dentistry students who allegedly made sexually violent comments on a Facebook group about some of their female classmates.

The hashtag began to trend hours after the school's president announced the male students wouldn't be expelled, but would face a "restorative justice" process instead.

Women don't get a 'second chance' at not being raped. They just are. So why do men who threaten rape get that luxury? #dalhousiehateswomen

Giving the people a voice

Toronto-based yoga teacher and writer Anne Theriault has been tackling various feminist issues on her blog "The Belle Jar" for years. She gained traction among a wider audience, particularly after the allegations against Ghomeshi surfaced and her voice stood out in a crowded field of Twitter commentary.

Since the Ghomeshi scandal broke she's doubled her number of followers on Twitter and has noticed increased engagement in the comments on her blog, with a "mixed bag" of both positive and negative responses.

Her views on feminist issues, often delivered with humour and wit, resonated with audiences on social media. In fact it was a tweet of hers criticizing Time magazine's decision to include the word "feminist" in a poll of words that should be banned that sparked the hashtag #FeministPrincessBride.

Having @time include feminist on their words to ban list makes me want to say it even more, like a petulant child. Feminist, FEMINIST.


Theriault, who initially started blogging during her maternity leave, said that over the years, the more she’s spoken out on various feminist issues, the more people have written to personally thank her.

But this doesn't mean she's immune from online attacks. She recalls being asked to appear on TVO's The Agenda to discuss the campaign #BeenRapedNeverReported in November, along with a professor of criminology and journalist Antonia Zerbisias.

While she believes the discussion was overall positive, she noted that one of the first comments left online after the segment aired was written by an anonymous poster who said she deserved to be raped for her views.

"It’s unbelievable and so bizarre that that was the first response," she said, noting that the comment exemplifies the pervasiveness of rape culture.

The future: 'What's our responsibility?'

So where does this leave us as we head into 2015? If 2014 was the year that saw women speaking out and more people believing them, what will the next year and beyond bring?

According to Rentschler, we'll have to see what the public chooses to do with all these shared personal accounts and insights from women. Will it result in new policies and legislation?

"We're seeing all of these stories – these incredibly moving and very difficult stories of survival – so what do we do with that as people are reading them, hearing them and are listening to them?" she said. "What's our responsibility? That ought to be one of the things we're thinking about starting right now."

Perhaps there's good reason to be believe that things will be different for the next generation of women – that they'll see fewer problems having their voices heard and respected.

This clip that was posted to YouTube in November. In it, a young girl at Disney World holds her own in an argument with an actor dressed as Gaston, the prince from the film "Beauty and the Beast."

As the actor engages the determined young girl -- named Isabella – he jokingly tells onlookers "I don't know where this girl came from, but somebody needs to put her back in the kitchen right now" and "no more thinking for you, you've already done enough of that."

The girl, without hesitation, fires back at him: "You're not marrying Belle" and "The beast is going to beat you… You don't know what you're doing."

As the crowd cheers on the youngster, the defeated actor eventually concedes: "I've been outdone by a girl, a short one."