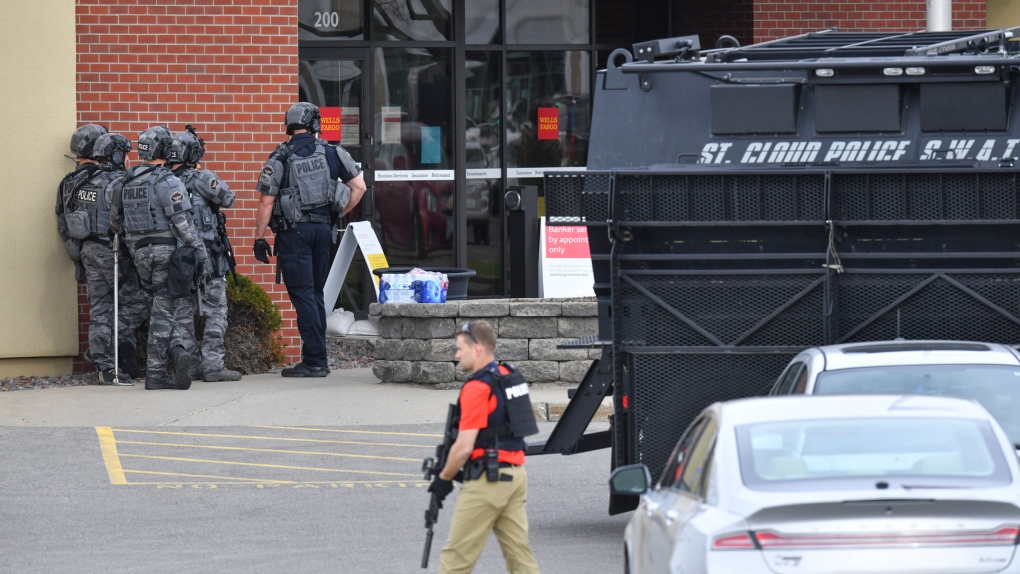 Officers stand near an entrance to the Wells Fargo branch Thursday May 6, 2021, in south St. Cloud, Minn. following a reported hostage situation. Police in Minnesota were on the scene Thursday of a reported bank robbery with hostages. (Dave Schwarz/St. Cloud Times via AP)

ST. CLOUD, MINN. -- A standoff between Minnesota police and an alleged hostage-taker continued into the evening Thursday despite the release of four bank employees.

It wasn't immediately clear if other bank employees were being held against their will.

The incident began around 1:45 p.m. Thursday, with a report to police of a robbery in progress. Law enforcement officials initially said an unspecified number of hostages were being held by a male suspect. Police said negotiations were continuing with the suspect, and there were no reports of injuries.

St. Cloud resident Abdi Kadir told the Minneapolis Star-Tribune he was in the bank drive-through when the teller hurriedly told him to leave. As he drove off, he saw people running out the bank's front door, he said.

"We recognize this is a traumatic moment for the community and our colleagues," Wells Fargo said in a statement. Company spokeswoman Staci Schiller confirmed "a hostage situation" at the bank's south branch. She said bank officials are co-operating with local law enforcement and will do whatever they can to assist the authorities.

Two armoured vehicles were stationed near the bank's front door along with several armed officers. Police moved onlookers away from the bank, but a crowd gathered across the street to watch the drama unfold.