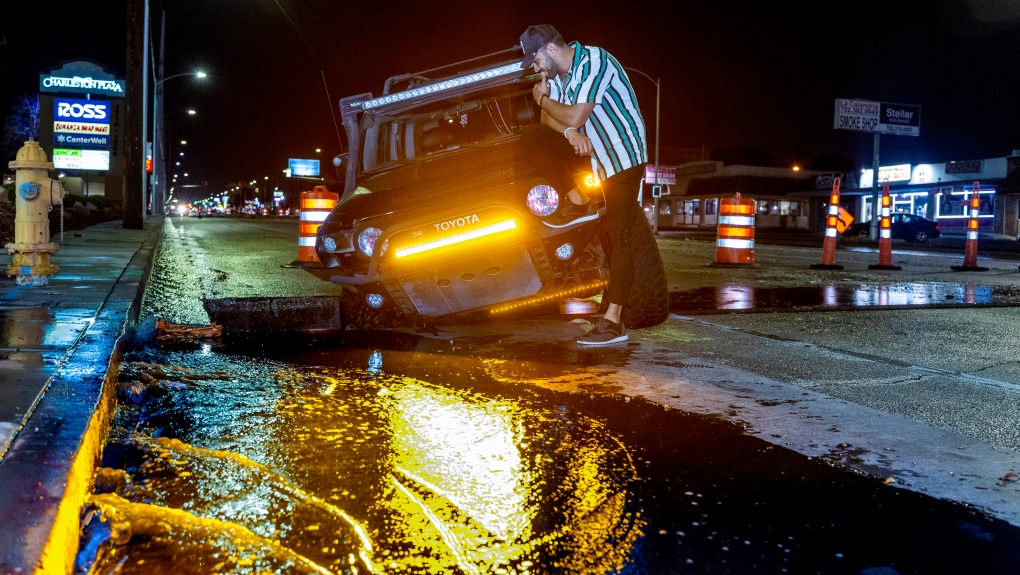 Driver Miguel Reyes checks out his vehicle stuck in a construction hole due to flooding along Charleston Blvd. adjacent to Tacos El Gordon as a powerful storm moves through the area on Thursday, July 28, 2022, in Las Vegas. (L.E. Baskow/Las Vegas Review-Journal via AP)

Two people are dead after heavy rain poured into Las Vegas casinos and flooded streets Thursday night in the wettest monsoon season in a decade, according to Clark County officials.

Officers with the Las Vegas Metropolitan Police Department and Clark County Fire Department firefighters located and then removed a man in a flood channel on Thursday night. He was taken in an ambulance to the University Medical Center of Southern Nevada where he later died, according to Clark County Deputy Fire Chief Billy Samuels.

On Friday around 2 p.m., officials with Clark County's Public Works Department were using heavy equipment to remove excess debris from the flood channel while firefighters dug through the piles by hand and found a second victim in the flood channel.

The man's body was removed from the debris and transferred to the Clark County Coroner's Office, Samuels said.

Rainwater poured in through a ceiling at Planet Hollywood casino on Thursday, as seen in a video posted by CNN affiliate KTNV, which reported 114 power outages in Clark County affecting some 12,000 people.

The robust monsoon rains in recent weeks have reduced drought levels in the Southwest -- as well as the Intermountain West -- to those not seen in many months. Extreme drought and extreme flooding will become more frequent and more intense as the planet warms, scientists have warned.

In Nevada, the "exceptional drought" area dropped to 4% from nearly 30% over the prior week -- its lowest point in nearly two years, the report said. Conditions worsened in California's Central Valley but improved some in the eastern deserts after the notable rains brought flooding last week to Death Valley.

With a death toll nearing three dozen, rescuers searched on Saturday for survivors among the Florida homes ruined by Hurricane Ian, while authorities in South Carolina began assessing damage from the powerful storm's strike there as stunned residents began the painstaking task of surveying their losses.