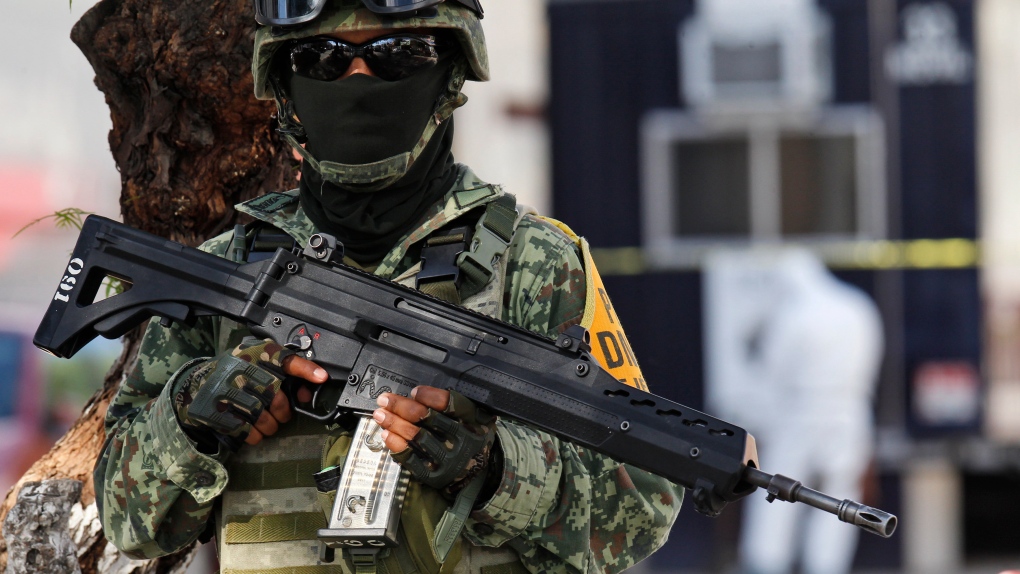 A Mexican soldier stands guard near one of four police stations that was part of a simultaneous attack by unidentified men who arrived at the different police stations firing their guns, in Leon, Mexico, Wednesday, Oct. 20, 2021. (AP Photo/Mario Armas)
MEXICO CITY -

Mexican authorities said Wednesday they have found 14 clandestine graves in the northern border state of Sonora.

Investigators said they cannot yet determine the number of bodies, but it is rare for drug cartels to take the trouble to dig more than one pit to bury a single body. Thus, the number of victims is likely to be at least 14.

The body dumping ground was discovered in a patch of scrubland by volunteer search teams made up of relatives of disappeared people. It is located near a highway west of the state capital, Hermosillo.

Sonora has been the scene of drug gang turf battles thought to involve factions of the Sinaloa Cartel, allies of the Jalisco cartel and a gang allied with fugitive drug lord Rafael Caro Quintero.

The announcement comes one day after police discovered three more bodies hung from a highway overpass in the central state of Zacatecas, where 10 other bodies were found last week.

The Zacatecas state public safety agency said in a statement the three bodies were found in the town of San Jose de Lourdes Tuesday.

Zacatecas has been the scene of a battle for territory among drug cartels. One week ago, 10 bodies -- nine of them hanging from an overpass -- were found in another town, Ciudad Cuauhtemoc, about 340 miles (550 kilometres) north of Mexico City. The 10th body was found on the pavement. All of the victims were men.

On Wednesday, the Mexican army announced that it will send almost 1,750 more soldiers and 1,650 more members of the quasi-military National Guard to perform law enforcement duties in Zacatecas.

The military will also send three helicopter gunships -- a weapon that President Andres Manuel Lopez Obrador has expressly said he no longer wants to use or accept from the United States.

Those nearly 3,400 troops will almost double the current combined force of about 3,900 members of those forces currently stationed in Zacatecas.

Defense Secretary Luis Cresencio Sandoval said the number of homicides linked to organized crime in Zacatecas had roughly tripled since 2019, rising from 560 that year to a projected total of about 1,450 this year.

The Sinaloa and Jalisco New Generation cartels have been battling for control in the state, which is a key transit point for drugs, especially the powerful synthetic pain killer fentanyl, moving north to the U.S. border.

Cartels sometimes make such public displays of bodies to taunt their rivals or authorities and terrify local residents.

In the first nine months of the year, Mexico had more than 25,000 murders, a number 3.4% less than the same period a year earlier, according to federal data.