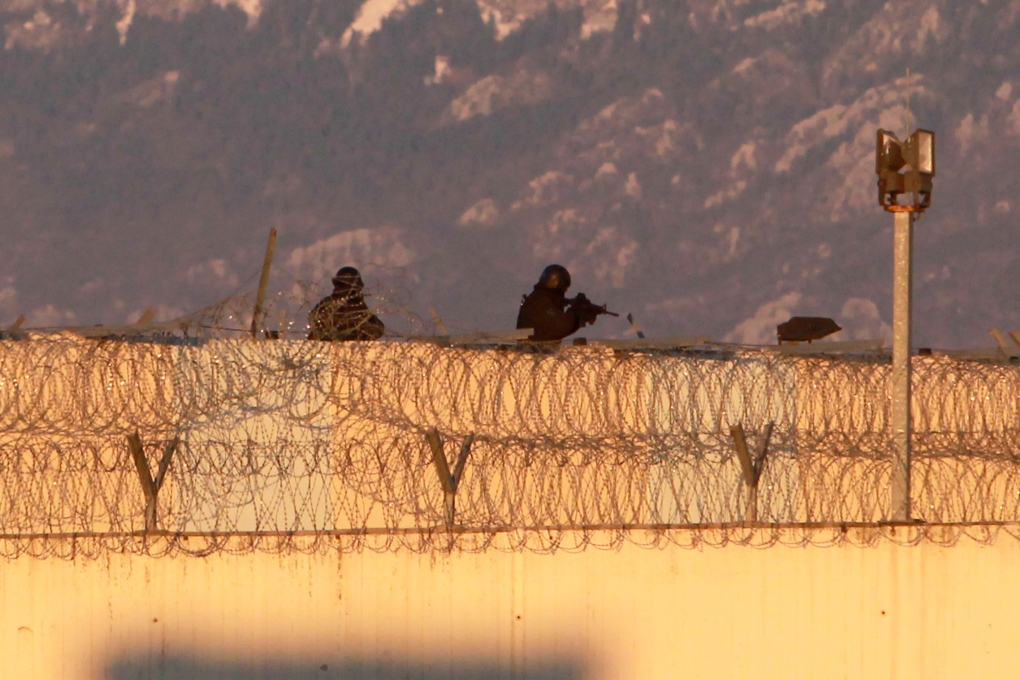 TRIKALA, Greece -- At least 11 inmates escaped from a Greek prison Friday night after gunmen brazenly attacked the site with grenades and automatic weapons, kicking off a nightlong standoff between police and prisoners. Two guards were injured, one of them seriously.

A police official, speaking on condition of anonymity because he was not authorized to talk to the media, told the Associated Press that two of the escaped inmates had been found and arrested Saturday afternoon. He said they were hiding in a church not far from the site of the prison. The official added that all the escapees were Albanian. A third escapee was arrested later Saturday in a nearby village, police announced.

The incident occurred near the town of Trikala, in central Greece, some 320 kilometres (200 miles) northwest of Athens. As many as six gunmen attacked the prison after driving up to the site in a van and pickup truck, according to officials.

The Ministry of Justice announced that gunmen using "two vehicles and very heavy weapons" attacked the prison's outside guards, as well as a prison patrol vehicle and two police cars.

"During the exchange of heavy fire that lasted over half an hour and turned the area into a battlefield, two perimeter guards were injured in the abdomen, one of them seriously," the ministry said.

"Until now we were worried that inmates would escape from the inside, because this was the danger. Now we have to redesign the security plan of the prisons, because as it seems with the new form that organized crime has taken, there is a risk of attacks coming from the outside to help inmates escape," added Roupakiotis.

Prison authorities were investigating reports that weapons had also been fired from inside the facility. The ministry's announcement said that "no guns or casings confirming the use of an automatic weapon by inmates during the escape have been found. However, the search continues."

When asked about the possible presence of guns inside the prison, Roupakiotis replied that the search continues.

Police spokesman Capt. Christos Parthenis told reporters Saturday that a number of sharp instruments were found inside the prison that the escapees used to prise open cell windows, as well as ladders that were used in their escape, but no weapons. He added that one of the vehicles used by the attackers was found, totally burned, in an attempt to erase incriminating evidence.

At least five grenades exploded, while army experts were expected at the prison to dispose of two unexploded grenades.

"It was like a war was going on. There was so much gunfire," said Trikala city councillor Costas Tassios, who lives in the village of Krinitsa, near the prison.

A bullet fired at the village damaged a coffee shop window in an incident also being investigated by police.

The escaped prisoners used ropes and bed sheets tied together to climb down from a guard tower that had been attacked. They had to go through two more perimeter fences, topped by barbed wire, before they escaped. The same police officer told the Associated Press that wire-cutting tools had been recovered.

Police set up roadblocks near the prison, searched vacant homes and farm buildings, and used two helicopters in the manhunt. Officers from evidence units were scouring the jail perimeter after dawn.

The attack was the latest dramatic incident at Greek prisons, which are suffering from serious overcrowding and staff shortages as the country struggles through a financial crisis and a recession that started in late 2008.

Last month, guards foiled a breakout attempt by four inmates who tried to escape by helicopter from Trikala prison, including notorious Greek inmate Panagiotis Vlastos, who is serving life for murder and racketeering. Gunmen in the helicopter had fired on guards in the Feb. 24 incident and lowered a rope in to the courtyard, but the chopper was forced to land after being hit by returned gunfire.

In a separate incident on March 17, a convicted contract killer, Albanian inmate Alket Rizaj, took several prison guards hostage in an attempt to escape from another prison in central Greece. The attempt was unsuccessful and the hostages were released unharmed following a 24-hour standoff.