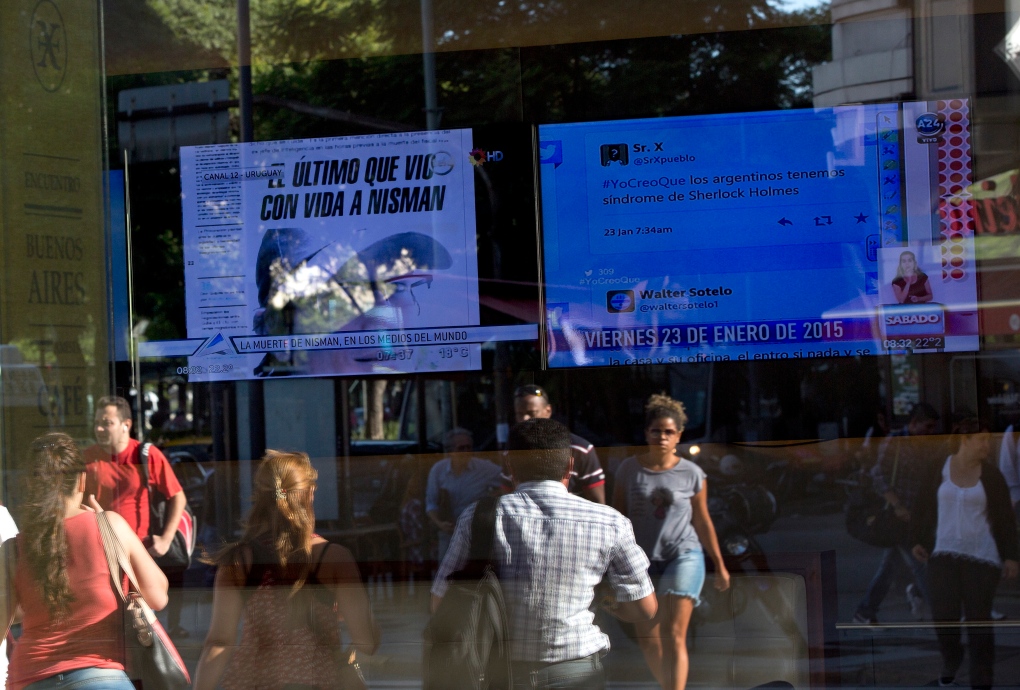 Television screens with the news about the death of Alberto Nisman, a prosecutor found dead in his apartment, are seen in Buenos Aires, Argentina, Friday, Jan. 23, 2015. The death of Nisman who had accused Argentina’s president of a criminal conspiracy came under mounting questions with the discovery that the apartment where he was found dead had not been securely locked and had a third entrance. (AP/Rodrigo Abd)

BUENOS AIRES, Argentina -- The 10 police officers assigned to protect a federal prosecutor who accused President Cristina Fernandez of shielding Iranians sought in an Argentine terrorist bombing are being investigated for their actions on the day the prosecutor was found shot to death.

The officers, along with two supervisors, are being looked at as part of an internal police investigation into the handling of Alberto Nisman's death, a person close to the investigation told The Associated Press on Friday on condition of anonymity.

The officers are not considered suspects, said the person, who was not authorized to comment publicly.

In particular, he said, investigators are looking into the time it took two officers assigned to the door of Nisman's building to advise their superiors that they had not been able to reach him by telephone.

Earlier this week, those two officers made declarations to lead investigator Viviana Fein, who would ultimately decide whether to try them for anything. All 10 have been suspended during the investigation, the person close to the case said.

The 51-year-old prosecutor was found Sunday night slumped in the bathroom of his apartment with a bullet wound in his head.

His death came days after Nisman gave a judge a report alleging Fernandez secretly reached a deal to prevent prosecution of former Iranian officials accused of involvement in the 1994 bombing of Argentina's largest Jewish centre, the Argentine Israelite Mutual Association. The attack killed 85 people and injured more than 200.

Also on Friday, justice officials said they have been unable to locate the man who loaned Nisman the gun used in his death despite "repeated attempts," and were ordering that he be barred from leaving the country without first getting permission from Argentine authorities.

Diego Lagomarsino, who spoke to authorities soon after Nisman's death, said he had given a .22-calibre pistol to Nisman because the prosecutor wanted it for protection. Lagomarsino has not been named as a suspect.

Fernandez, who has dismissed Nisman's allegations of a coverup in the bombing, published two letters on social media this week about the prosecutor's death -- the first saying it appeared he had killed himself, then a second saying she was now convinced it wasn't a suicide.

Nisman's allegations, she said, were based on false information given to him by the former head of the intelligence services. In her second letter, published Thursday, she portrayed Nisman's death as a way to damage her administration.

The U.S. government won't comment on the specifics of the case because the probe is in progress, but "we call for a complete and impartial investigation," State Department spokeswoman Jen Psaki told reporters in Washington on Friday.

"The United States and the international community continue to work with the Argentine government, as well as victims of the AMIA bombing and their families, to seek justice," Psaki said.

Iran's government has long denied any involvement in the bombing, and Iranian Foreign Minister Javad Zarif on Friday rejected Nisman's accusation that his country had conspired with Fernandez's government.

"It's unfortunate that certain people try to keep this alive in Argentina in order to make political mileage out of it. It has nothing to do with Iran," Zarif said in Davos, Switzerland.