Why bother being a sports fan? 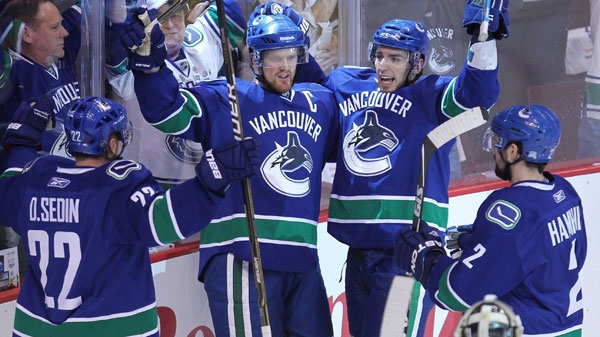 They betray you and disappoint you on a regular basis, taking your money, your free time and often your dignity in the process.

So, why the heck do we love our sports teams?

Just ask any Vancouver Canuck fan. It's been 17 years since they lost to the New York Rangers in the Stanley Cup finals, and they are just now finally returning. They haven't tasted from Lord Stanley's mug since their franchise's 1970 birth and they count a grinder like Stan Smyl among their greatest players. To love the Canucks is to know pain worthy of a David Cronenberg film.

Breanna Hughes, a Toronto-based product manager for Artez Interactive and blogger, describes herself as a life-long Canucks fan. To her, the Stanley Cup finals presents itself as an existential crisis.

"That's what so nerve-wracking. Will they ever get back?" she asks.

Hughes had a trip planned to Costa Rica and just found out Game 7 of the finals falls on the first day of the trip.

"I'm actually disappointed to go to Costa Rica because the Canucks might be in Game 7. My friends make fun of my first world problems."

"As human beings, we have this desire to feel a sense of belonging or a sense of social connectedness with others, and being a part of different groups (gives) us identities," he said in a telephone interview.

Hughes gets that -- she feels like part of the team.

"I'm one of those weird people, instead of saying 'they', I say 'we', when talking about the Canucks," she said.

For many people the connection they feel to their sports team is similar to what others might get from being a part of a church or a fraternity, Hirt said.

"How we spend a lot of our social time is talking about our team's performance from day to day and reminiscing about shared experiences," he said.

And certainly a large part of those shared experiences, is suffering through years, sometimes decades, without tasting victory.

"It's really painful when you invest in a team that's ultimately a loser," said Hirt, a Milwaukee Brewers fan.

"One of the things I find in sports fans which people don't have in too many other things is this idea that you earn the benefits of fanship through loyalty."

Speaking about long-suffering Boston Red Sox fans, Hirt said "those events that tested their mettle are things that they are proud of because they've earned the right to revel in the team's success when ultimately things turn around for them."

These same diehard fans are the ones who loath those who jump on the bandwagon when their team is doing well because "they haven't suffered enough to earn the benefits of fanship."

Jason Kurylo, who runs the popular Vancouver Canucks website, Pucked in the Head, says he grew up with the 1970s Canucks "who were horrible, but they worked really hard and they were excellent role models for that reason."

Growing up with such a weak team to cheer for has given Kurylo a better perspective on the present-day club. They haven't won it the big prize, but have been a contender for a decade and a half.

"Before, it was a pleasant surprise when they won, it was kind of like going to see a Toronto Raptors game . . . but the last few years, we've been a contender," he said.

Kurylo admitted that he used to be a fan whose emotional mood was tied to the performance of his team but says now as a husband and a father, "that puts things in better perspective.

"I've put so much into the team over the years, that all I want is a good game."

But come on, a non-sport fan may ask, how is sports fanship any different than being fan of a particular author or a band?

Music fans have to deal with the disappointment of their favourite band putting out a bad album and breaking up. But sports fans have it worse.

Weezer fans can return to the glory of their "Pinkerton" album with the touch of a button and ignore the rest of the band's increasingly worsening discography. A particularly inspired Guns N' Roses fan can argue that their unloved album "Chinese Democracy" is a misunderstood piece of art, and what's more, really believe that.

But sports are tyrannically fair. The best team always wins, by the very definition of a final score. Toronto Maple Leafs fans can't call a non-playoff team "criminally underrated" and re-watching the Blue Jays win the 1993 World Series on VHS is like smelling perfume off old love letters.

And just because you're a Lady Gaga fan, doesn't preclude you from being a Drive-By Truckers fan, it just makes you odd.

But a "real" sports fan is stuck with their team, never to love another. Unless, of course, they cheer for the Winnipeg Jets.

Referencing author Nick Hornby's autobiography "Fever Pitch," Hirt says that fans have a constant in their sports teams that perhaps they don't have in the rest of their life.

"They are a constant in life, that gives you a sense of stability to hang your hat on," he says.And the main constant of sport is that there can only be one winner and a lot of losers. Canucks fans hope this is their year to be the exception.

"It's a bit masochistic, but there's so much adrenaline, there's an emotional aspect to it," Hughes says of her fanship. "I'm nervous and excited."