Where do old election signs go to die? 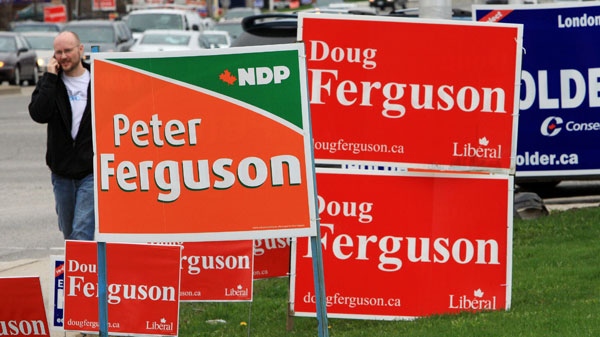 Pedestrians and motorists pass election signs for Ed Holder of the Conservatives and two Ferguson candidates, Doug for the Liberals and Peter for the NDP in the London West riding, in London, Ontario, Monday, May 2, 2011. (Dave Chidley / THE CANADIAN PRESS)

Yesterday, they formed a forest of colourful giant nametags soliciting your vote from neighbourhood lawns and public boulevards. Today they are lining gardens, filling recycling bins, and even serving as ... basket-weaving materials?

Campaign signs are the flotsam and jetsam left behind by all elections, and depending on the outcome of the candidate's bid, they can represent a painful reminder of a devastating loss, or a cheerful souvenir of a well-fought victory.

While most end up collecting dust in the garage or in the recycling bin, others find more useful ends. Some are used to line flower gardens or divide vegetable crops, others become snow-sliding devices or the backdrop for a science project.

Moscoe said he was even once presented with a hand-made basket created from one of his old election signs, with a wooden handle attached.

Others find their own uses for the signs -- or their hardware – sometimes before the campaign has even ended.

"I know in the old days we used wooden stakes, and particularly in Italian homes I used to get calls for two or three signs on a lawn," Moscoe said. "But eventually I realized they really only wanted the wooden stakes for their tomatoes.

CTV.ca contacted the national campaign offices for the Conservative, Liberal and New Democrat parties, and each said it's up to the local ridings to decide what to do with their signs when the election dust has settled.

For the most part, Moscoe said, unsuccessful candidates typically hold onto their signs in hopes they'll get another shot at electoral glory sometime in the future.

Phil Green, who ran for the Conservatives in the Mississauga-South riding in both 2006 and 2008, said it was tough to get motivated to collect his signs after the elections.

Green lost on both attempts -- the second time by just 2,000 votes -- and found it emotionally difficult to make the rounds on the day after the vote, when most of his campaign volunteers had gone home.

"You end up as a candidate pulling up the signs yourself and believe me, it's not fun. You just lost and you're pulling the sign up," Green, a 51-year-old consultant, told CTV.ca.

"You kind of turn your back to the street and pull your hat down a little bit."

Green had planned to make a third attempt for office in the current election and had saved a number of his 2,500 signs for that purpose.

However, he was asked by the Conservatives to allow a new contender to seek the nomination this time around -- "so my signs quite suddenly became useless."

He did find a somewhat meditative use for a number of the signs, however, incorporating them into a kayak-building project.

"It was very fine construction, cutting wood at very fine angles and so on and so forth ... and my signs were perfect for that," Green said.

"And then I had to make steam-bent ribs going around, and in order to measure the ribs and shape them I used signs, so I actually put those signs to quite good use in the construction of my kayak."

Moscoe, who is currently writing his memoirs after 31 years in municipal politics, said he used to hang onto his old signs and had an extensive collection taking up real estate in his garage, when his wife finally put her foot down and told him to toss them out.

For Moscoe, a former art teacher whose father was a sign maker, the signs served as souvenirs of election battles over the years. In several campaigns it was the signs themselves that made the difference between winning and losing, he said.

"I once got an acclamation because of signs," Moscoe said.

He explained that his campaign team had received word that someone was preparing to add their name to the ballot and challenge him for his seat on council.

That night, Moscoe and his campaign volunteers canvassed every house in the challenger's neighbourhood, and plastered the area with 300 signs.

"The guy walked out of his door and was so discouraged he just didn't put his name on the ballot and I got acclaimed," said Moscoe. "It was sneaky but it was a tactic."

In another election he found that an opponent was removing his signs and dumping them in the forest near Toronto's York University. Moscoe took pictures of the pile and badgered police to charge the candidate, and went to the media with the story.

In another instance, when he was challenged by a candidate with the same surname, Moscoe had to redo all his signs to include his first name, and even made "Howard is the real Moscoe" a campaign slogan.

While Moscoe acknowledges that signs can represent the difference between a winning and losing campaign, he also said they often mean nothing at all.

"It doesn't necessarily mean they're supporting you, however most people look at all the signs and say 'this guy has a lot of support,'" Moscoe said.

Though some municipalities require candidates to remove their signs within 48 hours -- and residents will often call and complain if they aren't picked up immediately -- Green said once that's done, it's important for candidates to take a break.

He advised unsuccessful challengers to deal with their signs – whether that means building a kayak, staking up tomato plants or some other creative use.

"Disappear for a while, go rest. You've been on a high for five weeks and the best thing you can do is disappear somewhere and spend a week vegging out and recuperating, because very shortly thereafter you have to go back to work," he said.

"If you get elected you can stay on that high and go to Ottawa but afterwards, if you lose, it's kind of a letdown and the best thing is to rest and get a change of scenery."