Was that a UFO hovering above Chelsea stadium? 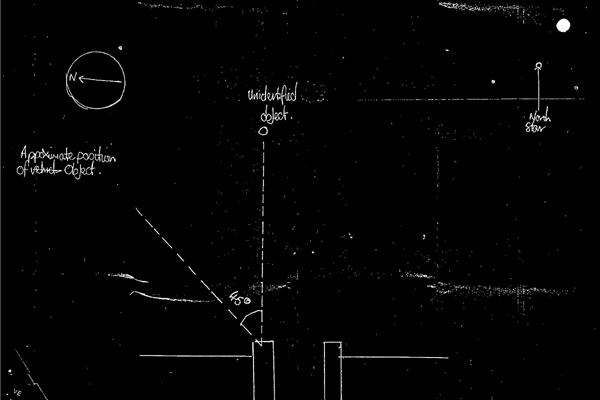 In this image made available by Britain's National Archives Wednesday May 14, 2008, a sketch made by a police officer after a sighting of an unidentified Flying Object in England in 1984 is seen. (AP Photo/National Archives)

In Britain, the truth really is out there as the government declassified more than 6,000 pages of reports on people's experiences with unidentified flying objects.

One of those documents includes a police officer reporting that he spotted a UFO hovering over Chelsea Football Club's stadium in the British capital.

The unnamed officer said he saw bright yellow lights over Stamford Bridge in March 1999. He said the lights moved with sound over the football pitch, and changed from a square to a diamond-shape before disappearing.

The reports cover the years 1994 through 2000 and were released under a three-year project between the Ministry of Defense and The National Archives.

The documents include some people's drawings of what they saw, and in at least one case, video.

A UFO sighted by police in northeast England was filmed, and the coast guard was informed.

The coast guard also reported the UFO and an unidentified object was recorded on radar.

The documents can be viewed online at http://ufos.nationalarchives.gov.uk/.