Theirs was a classic love story.

Frank Alexander was a Navy veteran, who returned from World War Two to the love of his life, Tena. He started his own successful dry cleaning business in Winnipeg, and together they raised five children. His family recalls Frank as a gregarious dad, with a great sense of humour.

"He was a good family man, he was playful and he loved his wife, thought she was the most beautiful thing," daughter Joanne Rislund told W5.

When Tena Alexander learned that Frank had Alzheimer's disease she was devastated. Unable to look after her husband, and with no other options, she moved him into a nursing home, Parkview Place.

From the beginning, Joanne and Michael were disappointed with their father's care at Parkview.  They worried the home was overcrowded and the staff was unable to control some of the more aggressive residents. Michael recalls there were "fights and arguments and people upset with each other. The place (was) bursting with people."

Then on the night of March 24, 2011, Joanne received a phone call urging her to rush to Winnipeg's Health Sciences Centre. When she arrived at the hospital, her father was tied down and his legs were flailing up in the air. Frank's skull had been fractured and blood wouldn’t stop pouring out of his left ear.

"The nurse came over and explained they had to hold his arms down because he was combative from the severe head injury he had," recalls Joanne.

Police were at the hospital and told the Alexander family that Frank had been attacked by another resident, 70-year-old Joe McLeod, who had placed both hands on Frank's chest and shoved him violently. Frank fell backward and cracked his skull on the tile floor.

Four days later, because of his severe head injuries, Frank Alexander died. Michael still can't believe his dad, a veteran and loving father and husband, was so viciously attacked. "He was a non-violent man. He really was. So for him to die that way -- it just hurt."

After Frank died the Alexander family was astounded to learn that this wasn’t the first time McLeod had been violent inside the care home.  At a two-and-a-half hour meeting with the Winnipeg Regional Health Authority and Parkview Place, Joanne and Michael were told there had been nine different incidents where Joe McLeod had attacked staff -- including punching a nurse in the face.

After the attack on Frank Alexander, Winnipeg Police arrested McLeod and charged him with manslaughter.

Like the Frank Alexander, whose death he caused, McLeod also suffered from Alzheimer's.

People with Alzheimer's aren’t always aggressive and with the proper treatment and care, they can live calmer and safer lives in nursing homes or at home. Faye Jashyn, McLeod’s daughter, told W5 that prior to the deadly attack, she had expressed her concerns about her father's violent behavior to officials at Parkview Place but she was told the staff was trained to handle someone with his history of violence.

"It concerned me. They couldn’t figure out what to do. With all the professionals they had on staff, they should’ve known how to handle him."

The charges against McLeod were eventually thrown out in court because he was found unfit to stand trial.

The case of Frank Alexander’s death is heartbreaking yet far from isolated.  W5 combed through reports from provincial and territorial coroners and chief medical officers and reviewed news archives, to obtain a national picture of nursing home homicides and identified at least 60 across Canada during the past 12 years -- and the number appears to be growing.

On average, that's about 5 murders per year inside institutions that are supposed to be safe havens for the most vulnerable among us.

Homicides are the most extreme cases of violence in nursing homes, with many more cases of assault and violence right across the country. Last year a ground-breaking W5 investigation into resident-on-resident abuse in long-term care homes found more than 10,000 "incidents" across Canada in one year.

The data was obtained after W5 filed access- to-information requests about resident-on-resident attacks with 38 provincial and regional health authorities.

But in many of those cases -- ranging from assaults to homicide -- charges are rarely laid, because the perpetrators, like Joe McLeod, often suffer from dementia or mental illness and are generally not criminally responsible for their actions.

But Frank Alexander’s family continue to pursue justice for their father. They have launched a civil lawsuit against Parkview Place, the Winnipeg Regional Health Authority and McLeod.  They are also awaiting an inquest that will be held to investigate Frank’s death. Scheduled to start September 30, it has now been delayed until next January.

"We didn’t want our dad to die for no reason. We wanted this platform," says Michael Alexander, who is hopeful his father's legacy will be life-saving changes to Manitoba's system of elder care.

Parkview Place is owned by Revera, a for-profit chain that manages more than 200 senior facilities across North America.

In an e-mailed statement Revera wrote: "Mr. Alexander's death was a tragedy and we deeply sympathize with both families involved. The inquest into this case is critically important to everyone involved.

"As general context, the majority of people entering long term care homes today have complex chronic conditions. Increasingly, this includes dementia and mental illnesses, which can create unpredictable behaviour. As long term care providers, we are working hard to meet these evolving needs, by learning from experts such as the Alzheimer Society, building staff competencies through training and adopting best practices such as person-centred care."

As for Joe McLeod, he is now a resident in a geriatric ward at Manitoba’s Selkirk Mental Health Centre. There, McLeod is among other elderly patients with responsive behaviours related to their dementia or mental illness.

McLeod's family is happy that he has found help, but is saddened that it took the death of Frank Alexander to get it. 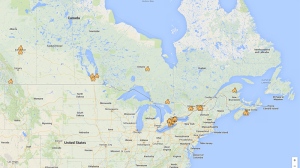