W5 exposes tactics behind online predators, police who bust them

She looked and acted like every teenage boy’s fantasy. Beautiful, blonde, and sexually aggressive; profile photos showed her clad in a cropped top and tight jeans.

Her name was Ashley Matthews and her online identity claimed she was a 14-year-old girl from Whitby, Ont.

When this alluring teenager sent a Facebook friend request to 12-year-old Eric, he couldn’t believe his luck.

“I added her on Facebook because it said I had a mutual friend. And so being a teenage boy, she’s an attractive girl, all my friends have her and so I added her.”

Ashley was already mutual Facebook friends with other boys from Eric’s school so he trusted her. Almost immediately, Ashley wanted Eric to get on MSN, another online instant messaging service that allows real-time exchanges with both text and video, and to chat via webcam with her.

She was trying to convince him to do more than just continue chatting.

“It started off just like regular conversations. Like, ‘Hey, like what’s up? How are you?’ And then it just kind of slowly climbed the staircase. So it’s kind of ‘Oh, you’re cute and stuff. I like all your profile pictures. You look like a really hot guy and stuff.’ And then from there it went to MSN and ‘Oh, yeah, I bet you have abs. Take off your shirt.”

Eric never saw Ashley because, as he told W5, “I went on but then her camera didn’t come on. And she said, ‘Oh, my little brother broke it.’”

Eric, now 15, has never before spoken out about how easily he was convinced to trust a total stranger online. Along with his mother, Shea, they wanted to share their story with W5 but couldn’t due to a court-ordered publication ban.

With the family’s permission, W5 brought an application to the Ontario Superior Court of Justice to have that ban lifted. In a judgement issued August 21, 2013 Justice Gilmore lifted the publication ban, allowing both Eric and his mother to be identified and to speak about both the communications with Ashley Matthews and how they and eventually police discovered her real identity. 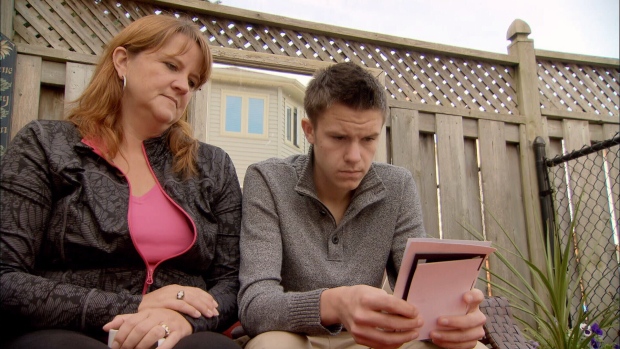 Eric’s mother, Shea, prides herself on the close relationship she has developed with her son. As he began communicating with Ashley Matthews, she could tell he was keeping something from her.

“He became quiet, reserved, definitely that he was thinking about something that he wasn't expressing to us.”

Her maternal instincts convinced her to check Eric’s Facebook and MSN accounts.

One evening, when Eric was out with friends, she went to his room and checked his laptop. Instantly, she believed that Ashley was not just another attractive teen girl.

“The picture of the girl seemed very posed and then when we looked deeper, there were no other personal photos and all of the friends that she had were young boys,” Shea told W5’s Sandie Rinaldo. “I thought it was some creepy old guy trying to talk to my son.”

And that “creepy old guy” posing as Ashley Matthews was already Facebook friends with thousands of young, 12- to 14-year-old boys.

At first, he became angry and was in complete denial.

But as Shea showed him how Ashley Matthews’ profile seemed less like a real person and more suspicious, Eric was devastated

“I was kind of like, ‘What are you talking about? Like, I’ve been talking to this girl for three days now. I’m pretty sure she’s real,’” he recalled.

“And then I realized that I should have taken like an extra ten minutes to look at her profile.”

Shea worried about how many boys were being tricked into falling for “Ashley Matthews” and going down an even more dangerous path.

“I don’t think any teenage boy would have a problem with the profile picture that Ashley was presenting to them,” said Norton of the sexy teen communicating with Eric.

“I looked at the profile and right away I knew it wasn’t a real profile.” 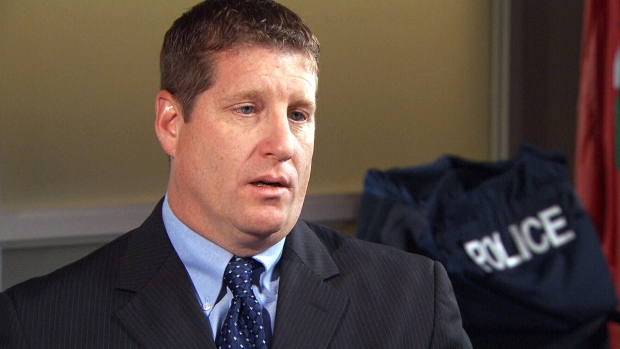 Together, Norton, Shea and Eric embarked on a journey to expose and stop an online predator.

Norton’s first steps were critical. He had to find out who was hiding behind Ashley Matthew’s profile and he had to act fast before this individual switched their online identity.

With Eric’s permission, the detective took over the teen’s Facebook account and started chatting with Ashley Matthews.

“These individuals are good at what they do. They know how to manipulate our kids and they do it every day. They research it, they live it,” said Norton.

The Oshawa, Ont. resident had taught in Durham Region public schools since 1998.

Much to Eric’s and Shea’s shock, Martin was known to both of them. He had taught Eric at Sir William Stephenson School in Whitby, where he was also the school’s photographer.

When Eric found out he was devastated.

Some of those digital files were of children as young as twelve, who Martin had convinced to strip and perform sex acts on camera.

In December 2011, Martin pleaded guilty to ten counts of Internet luring and possession of child pornography. He was sentenced to prison for two years less a day. He was also placed on the sex offender registry for 10 years, prohibited from being in any public place where children might gather during that time, and his teaching license was revoked.

Detective Randy Norton was the right cop to investigate the Ashley Matthews case. He is part of an Ontario Provincial Police joint taskforce called “Project P” – the “P” stands for child pornography.

At his office at Durham Regional Police we watched him work, logging onto chat rooms while posing as a teen. Within minutes he’s being invited to chat and share pictures with what are obviously older men. But this isn’t an offence unless the online conversation crosses the line into a discussion about sex.

After a few minutes he’s chatting with one individual who’s offering to show his penis online. Another begins a conversation with Norton’s online persona, claims he’s fifteen and sends webcam photos of his privates.

“They don’t necessarily cross the line right away. It could take months. Because you have to understand, these individuals are grooming. They’re trying to build a friendship with the child, build their trust and to get that child to trust them. To then, once they get that trust, that’s when they’ll start crossing the line.”

According to Norton, many teens are too trusting online.

“They’re fearless of it. They just don’t think it will happen to them. Once it goes from good to bad, they really don’t know what to do. Because they feel they’re so involved in it now. And their biggest fear is that ‘If mom and dad find out about this, I’m going to lose my computer. So I can’t tell them what has just happened to me online or what I had just seen.’”

Norton stresses that parents must pay attention to where their children are going online and to keep lines of communication open, particularly as the number of online sites used by kids and predators keeps growing.

“You know, there's Tiny Chat, Text Plus, What's App, Kick, Twitter, Keek, Tumbler, Omegle and other ones. These are the ones that the parents need to start looking to see if your kids are actually communicating on them.”

To see how open kids are and how much of their lives are publicly available on the Internet, W5 visited a number of the most popular social sites. Producers found dozens of social media profiles that were completely open to review.

Many teens had no privacy settings at all and were often posting explicit photos, messages, personal phone numbers, class schedules and home addresses.

At one site they found 12- to 14-year-old girls posting bikini photos and so-called “selfies,” which are photos taken by themselves and posted online – in the hopes of being “liked”.

When W5’s Sandie Rinaldo showed Norton what the program had been able to find, easily online, he was concerned about the number of “selfies” openly displayed. All too often, he said, these photos end up in the wrong hands.

“There’s not a case that I have yet investigated involving child exploitation images where the predator’s collection hasn’t had those selfie pictures, the mirror shot of the young girl in her underwear or bathing suit or whatever.”

On Facebook, W5 found profile pages openly promoting the sexual objectification of children and teens. Two of these pages – “Jailbait Teens” and “Sexy Teen Selfies” – were full of photos scooped up unknowingly from kids’ personal sites and shared online.

70 per cent of “friends” are total strangers on Facebook

As a test, W5 created its own fake profile page on Facebook, claiming to be a 13-year-old girl living in Ontario. The newly-created profile featured one photo and included a variety of favourite teen movies, music, and books.

Next, the producers picked two Ontario high schools, identified through Facebook’s “About” filter and sent out 140 friend requests to students.

Within a week, 96 of the 140 requests had been accepted. By the time W5’s one-week test was completed 70 per cent of the high school students we’d reached out to friended a total stranger online.

The former Crown prosecutor formed the Red Hood Project in Vancouver to demand online social media companies redesign their sites to be safer for young people.

“You couldn’t design a more perfect environment for predators and malicious individuals to damage and harm children. And there is virtually no consciousness at the corporate level, that that needs to change,” said Garossino.

W5 contacted Kik, Omegle, Instagram and Facebook for information about their policies to prevent fake online profiles created for the purposes of luring children and teens. Only Facebook responded, insisting that they take the issue of child safety seriously.

Facebook’s Canadian corporate communications officer Meg Sinclair says the company operates under California law, which is required under that state’s Online Protection Act, to allow only those aged 13 or older to create a profile.

Sinclair acknowledges that some people do create fake profiles, they are removed immediately as soon as the company is made aware of them. Other preventative features include default settings for teens.

“Privacy settings on all posts made by 13- to 17-year-olds is set to 'friends only' by default,” wrote Sinclair in an e-mail, describing settings that prevent strangers from automatically having access to private information.

“I think this goes back to the importance of education around sharing responsibly and exercising the same safety practices online that people would use offline - not talking to strangers, not accepting friend requests from people you don't know),” she wrote.

Informed of the pages “Jailbait Teens” and “Sexy Teen Selfies which W5 found online, Facebook acted quickly, finding that they violated their “community standards” and removing them from the site.

Eric said he has learned a valuable lesson about online safety. It’s one reason why he agreed to speak openly about the experience of being targeted by an online predator.

“It was the farthest thing from my mind that I wanted to openly speak about this. But I think now that I went through all the court case, there were like 50 other boys that had come out and said, Ashley Matthews had talked to them in the same manner.

“I felt at that point that it was like a responsibility of mine to try and help other people that were affected by either him or being affected by other people. If it is happening to you, it’s not your fault. You’ve done nothing wrong. It’s the person that has done it to you, it’s their fault. And like I know it will be hard to come out and talk about it but in the long run like it’s going to help hundreds of people.”