It’s 9 p.m. on a cold January night in New Jersey, 24 hours before a Donald Trump campaign rally, and the faithful are already lined up.

It’s like a carnival scene. The streets are lined with vendors hawking Trump 2020 banners, buttons and -- well, you name it. Shirts flapping in the cold wind are emblazoned with everything from a crude “Impeach This” (with a hand flipping the bird), to the more church friendly “Trump: The Chosen One.”

Trump flags – and fans – are hanging out of every bar window.

The closer you get to the front of the line, the louder you hear The Voice. The voice of Donald Trump, blaring down from big screens towards his loyal fans.

Thousands of his supporters lined up in hopes of getting through the doors of the rally -- for two days and nights in minus-20 degree weather.

For true Trump believers, it’s all worth it. And many of those are Americans of strong Christian faith -- for whom President Donald J Trump is “the big guy.” 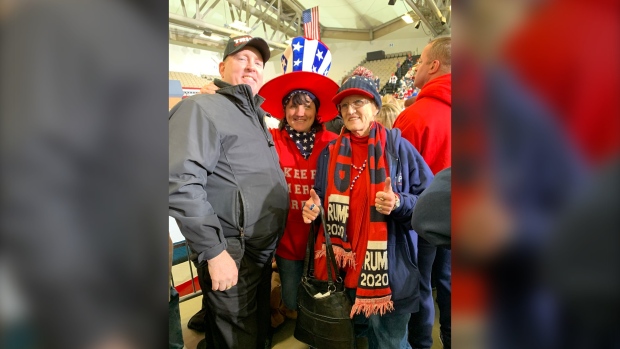 Among the mob of Trump devotees, W5 found a small, quiet group huddled under blankets, holding signs that read: “Catholics for Trump.” With cupcakes and coffee as sustenance, the group of about 10 included two priests and their leader, Mary Smail.

Mary is a devout Catholic and school teacher who’s firmly pro-life. Like many conservative church goers, Mary has always voted Republican, including for Trump in 2016.

Of Donald Trump’s decidedly un-friendly church tendencies, she told us she forgave him. “I love the guy,” she said, “no matter what.”

When we returned the next morning to interview Mary, she was a bit more tired, a lot colder … and ecstatic. This was the day she’d been waiting for. The day she could get as close to Donald Trump as possible.

As she edged towards the convention centre, jammed between a few thousand other Trump fans, it wasn’t the warmth she was looking forward to -- it was getting to see Trump, in person right there in front of her on stage.

The stage is set to rally the troops. It’s like being in the centre of a lion’s den with Trump feeding red meat, hitting all the usual hot buttons:

“In Virginia, they want to take their guns away,” he proclaims and the crowd loudly boos.

“This powerful border wall is going up at record speed,” he claims and the crowd cheers.

“I've asked Congress to prohibit extreme late-term abortion,” he promises and the crowd, including Mary, hoots and hollers.

Mary admits that conservative church-goers like her ignore Trump’s sins and crude language. It’s erased to forward what they believe Trump is doing -- furthering the Lord’s work.

His evangelical supporters feel the only way that can continue is to keep “the big guy” in the White House.

Don Martin: Trash-talking Trump a no-fly-zone for snowbirds in Florida

Trump blasts Christian magazine that called for his removal