The inside story: How a trip to the Toronto Eaton Centre turned into horror

Connor Stevenson will always have shrapnel embedded in his head and a permanent plastic plate to do the work of a bone that protects his brain. These will always be the physical and invisible reminders of a day in the life of a 13-year-old boy.

The day he walked into Toronto's Eaton Centre and was carried out on a stretcher, barely alive.

The broad strokes of his story are well known but the fine points have only emerged over six months of rare access Connor's family gave to CTV’s W5 to document their journey back to life.

The story starts on a Saturday afternoon in June, 2012.

His mother, Jo-Anne Finney, had taken Connor and his 15-year-old sister, Taylor, into the city for a matinee.

When it was over, Jo-Anne says "We had a little bit of time kill." The turn of a phrase that would take on new meaning within minutes.

They walked across the street to the Eaton Centre where Connor wanted a new pair of Nikes and Taylor wanted Toms. They all agreed that a bite to eat in the food court was a good idea before their drive back to Port Hope, Ont.

They'd just found a table when their lives were irrevocably intercepted by a bullet that missed its intended victim in what police call a targeted shooting.

There is no script outlining how to react when your 13-year-old brother is randomly shot in the head or your boy is losing blood and dying in front of you -- but if there were, this family had it memorized.

According to paramedics and firefighters who raced to the scene, what Jo-Anne and Taylor did in those crucial moments before they arrived helped save his life.

Taylor says when it happened, she became a different person, instincts she didn't know she had kicked in. She kept talking to Connor, trying to keep him awake.

"I remember saying like, ‘Oh, I love you so much Connor and even though we fight I'm still really thankful for you and I don't know what I'd do if I ever lost you.’"

She told him he just couldn't die there on the food court floor.

A crew of four firefighters from the Grosvenor Street Station was among the first to arrive.

"I remember walking through and looking around and you see the casings all over the ground,” Brian St. Thomas told W5.

“There was a stroller, specifically I remember it was tipped over, there was actually somebody that jumped so hard their shoe was still on the ground."

Firefighter Matt Downes remembers mall security running around a corner yelling "Hey, hey, we've got a kid over here. Connor is laid out on the ground and his mom is on top of him."

Connor's eyes were flickering and his breathing was faint. After a bullet to the head, Downes knew, chances of survival were slim. Capt. Jeff Nester saw Connor start to seize up.

Connor wasn't the only victim. Paramedic Rob Kovacsi recalls: "The first one was still alive. He's got significant injuries. He's been shot numerous times in the torso. He's critical. The second guy, I had to triage him out. That's not something that we do on a regular basis. That is something which feels wrong."

Triage him “out”. That means the victim was already dead and beyond emergency care.

In a rare and chilling account the emergency responders told to W5, four firefighters and two paramedics, all of them veterans of downtown Toronto admit, this call and this boy will forever be "the great save."

Radio calls obtained by W5 catch the drama of later crews racing to the scene. “Pumper 315, pumper 314 is advising you use caution. Apparently the shooter may be on the floor above the food court level. Police are currently there, with guns drawn.” Cool under pressure, over wailing sirens the pumper captain respond, “Roger. Got that.”

In the unfairness of life, this wasn't the first time Connor's parents rushed to Toronto's Hospital for Sick Children. They lost their first son, Bryden, at just 18-months old. He died from an infection.

When his father Craig Stevenson got the call that Saturday afternoon in June, it took a few moments to fully comprehend what his daughter Taylor was saying: "What do you mean shot?" Jo-Anne took the phone and suddenly it was real.

This stoic family, forever scarred from the loss of another child, was about to walk back through a door they hoped was closed forever, back through the halls of Sick Kids, back in the chairs of a hospital waiting room, holding their breath for better news.

The cycle of surgery and recovery for Connor has taken months. The hospital allowed W5 cameras into the operating room to follow the procedure but the surgeons were the only ones who didn't want to talk about it.

Their work though, speaks for itself. This team of doctors took a boy, barely breathing, and restored him to a normal kid.

Connor was every bit a normal kid when he jumped in a fire truck months later, with Capt. Nester and his crew, to travel back to the place where it happened.

For the family and the firefighters, standing in the food court together, was somehow cathartic. They recounted vivid memories, each from a different vantage point, of what they saw and what they were thinking. Nester is the first to admit how rare it is to reconnect with the victims involved in a call but so much about this story is rare.

The parents, already tested who find the strength to fight again.  The young girl who finds the courage to help stop her baby brother from bleeding to death. And a little boy who remembers his big sister’s attempt to keep him alive.

"Taylor was asking me math questions," Connor remembers, "to try and keep me alert and awake, I remember basic questions like two plus two and one plus one."

The answer in this case, is seven. Seven people were shot that day, one died on the floor of the food court, one died later in hospital, fourhad less serious wounds and in a life and death struggle, one 13-year-old teen survived.

The great save. Most of them don't end this way. 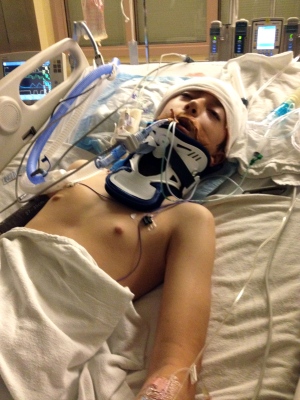