Signal detected: Are we alone in the endless abyss of space?

TORONTO - For millennia, humans have looked up at the night sky, wondering whether alien life exists. For W5, I posed that question to several planetary scientists, astrophysicists, and radio-telescope astronomers who are bringing new tools and techniques to the search for extraterrestrial intelligence (SETI).

THE SOUND OF ET

We collect sounds from space all the time in the form of radio waves. For example, the farthest spacecraft from Earth, Voyager-1, sent back some haunting signals as it crossed from our sun’s solar system out into interstellar space. But those same electronic ears built to listen for human-made signals, might someday hear sounds sent by someone else.

On April 29, 2019, the Parkes Radio Telescope in Australia was pointed at the star closest to our own sun, Proxima Centauri, when it picked up a strange signal. It was a pure tone at 982.02 MHz. We know there’s a planet orbiting that star. Might aliens on that planet have sent the signal? How would we know?

Daniel Wertheimer, an astronomer from the University of California Berkeley, has been scanning radio waves for decades. I asked him what he listens for.

“When we point our telescopes anywhere in the sky, what we receive sounds like hissing noise (from galaxies and the big bang radiation). It sounds like when you tune your radio TV between channels. If ET were transmitting, we'd still get the hissing noise from the galaxies and big bang, but also might hear a very faint whistle.”

That 2019 signal from Proxima Centauri was just that – a faint whistle. Now the question is whether it’s the signal we’ve been waiting for, or whether, like hundreds before it, it’s just more interference from here on Earth.

After all, similarly tantalizing signals detected every once in a while since the 1990s, by that very same telescope, were later discovered to be coming from the microwave oven in the lunch room. (If you open the door before the bell goes off, apparently that creates an alien-like artifact in the signal).

Will the signal from Proxima Centauri be a bust, too? Perhaps. But that result, Wertheimer tells W5, might be a blessing in disguise.

“ET, if they’re out there, may not have our best interests at heart… Maybe they're more interested in grinding up our planet and just looking for palladium.”

THE SIGHT OF ET

Another big question is what those aliens, if they exist, might look like. To get an informed guess, I turned to a scientist whose work doesn’t involve telescopes at all.

From our human perspective, it’s hard to find anything on Earth more alien than an octopus. They have no bones. They can change the colour and texture of their skin. And their bodies change shape like flexible water balloons – even an impressively large octopus can squeeze its body through a hole just a few inches wide. Their eyes don’t see colour, but they can detect the polarization of light, something totally invisible to us. They have nine brains – a big central one, and a smaller one in each arm. The list goes on.

“We often talk about… octopus as aliens from inner-space,” Hanlon tells W5. “Inner-space being the ocean. And they really are. They're alien even relative to other animals that live in the ocean. They are just so different.”

Hanlon would know. He’s spent more than 40 years trying to understand almost every aspect of these remarkable creatures: Asking how a colour-blind animal uses colour camouflage to hide from predators that see colour even better than humans do, how they use their remarkable intelligence while hunting, and what lessons a flexible, hydrodynamic skeleton might offer for the next generation of robots.

But is it silly to expect aliens to look anything like earthlings at all? That might seem unlikely, but a quirk of evolution here on Earth hints that extraterrestrials might not look so alien after all. It’s called: convergent evolution. Assuming evolution operates the same way on other planets as it does on Earth, logic dictates that on Earth-like planets, alien creatures should evolve body forms similar to those found here on Earth.

THE SHARK AND THE DOLPHIN 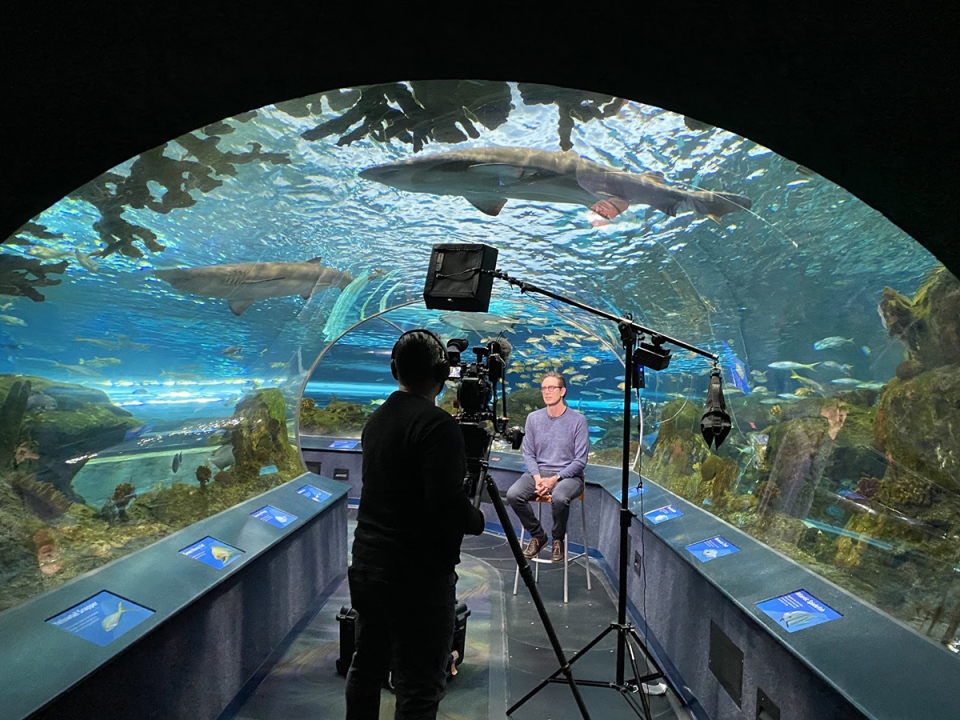 A classic example of convergent evolution is the story of the shark and the dolphin. Sharks have remained more or less unchanged for more than 400 million years. The dolphin’s lineage, however, has changed a great deal in the more recent past. The dolphin’s ancestors, dog-like terrestrial mammals, moved into the sea about 50 million years ago.

Over evolutionary time, they then gradually became more and more adapted to chasing fast-moving fish. Their legs became flippers; they grew tail flukes. And before long, those mammals started to look an awful lot like other animals that hunted the same kinds of food: sharks.

If you compare a great white shark to a Pacific white-sided dolphin, the similarities are striking: The overall torpedo-like body shape, the positions of two pectoral flippers and a large dorsal fin, the elongated jaw with uniform, pointy teeth. If there’s some alien creature hunting elusive prey under the water of a distant ocean planet, it seems safe to assume their body shape might be shark-like, too.

But it’s not just sharks and dolphins; convergent evolution is ubiquitous. The porcupines that live in Africa and the ones that live in North America are separate lineages that have both converged to have prickly hair. Vultures from Africa are an entirely different lineage from vultures in the Americas, but the broad wings and bald heads look the same. Bat wings and pterosaur wings look strikingly similar, but are independently evolved. Over and over again, evolution finds the same structural solutions to life’s challenges. Evolution sticks to themes.

One day, SETI researchers hope to get a message from extraterrestrial beings. With any luck, that radio transmission will include a selfie so we can sense the sounds and sights of aliens all at once.

Perhaps the aliens will look like octopuses… or maybe humans… or insects, or dinosaurs, or algae. Or perhaps they’ll look totally different from anything we’ve ever imagined. But until we do make contact, researchers who are curious about exotic life forms – people like octopus expert Roger Hanlon – have plenty left to learn about the intelligent life that occurs right here on Earth.