It is a common piece of wisdom that could apply to many things. How sausages get made for example. Or, how chickens end up on our plates.

As much as many people would probably prefer to avoid the question, Mercy for Animals Canada is trying to make them face it.

For six months, an employee of the animal rights group worked inside one of the largest chicken slaughterhouses in Canada, while using a hidden camera to secretly videotape what he was seeing.

He spoke to CTV’s W5 on the condition that we not use his real name. So, we’ll call him John.

“It is one of the ugliest places you can imagine,” he said.

The slaughterhouse is owned and operated by Maple Lodge Farms. By any standard, the place is big, a sprawling series of factory style buildings in a field located on the edge of Brampton, Ont. near Toronto.

A steady stream of tractor trailers arrive from mostly Ontario farms that raise the chickens from hatching to slaughter.

Reading this from an app? Tap here for a better experience.

The birds are bred to grow quickly, their lives last usually no longer than two months. And the sheer numbers can be staggering. 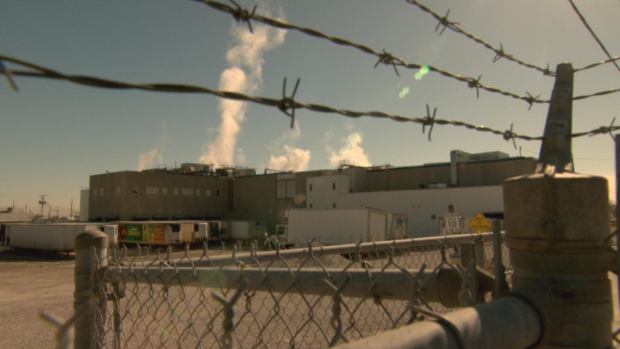 Nearly half a million birds are slaughtered at the Maple Lodge plant every day, feeding a Canadian market that consumes more than 650 million chickens every year, making it the most popular meat source in the country.

The Maple Lodge Farms website states that it treats the birds humanely and with respect. But the undercover video shot by Mercy for Animals Canada does show things that many viewers probably would find difficult to watch.

“There are birds that arrive dead in the hot months,” John told W5. “They die from over-heating. And in the colder months, chickens die from being too cold. They actually arrive frozen like ice blocks.” 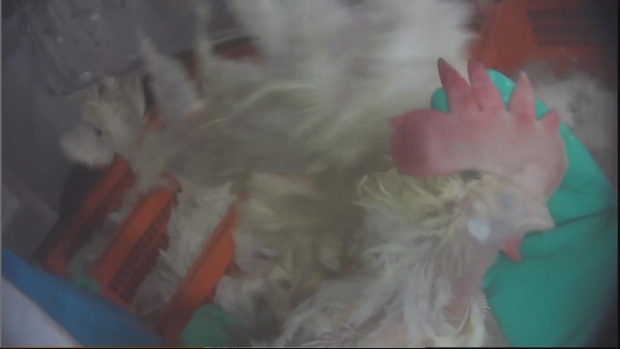 A frozen chicekn is unloaded from a crate.

Once inside the plant, the crates of chickens are unloaded, and placed, sometimes roughly thrown, onto a conveyor belt. 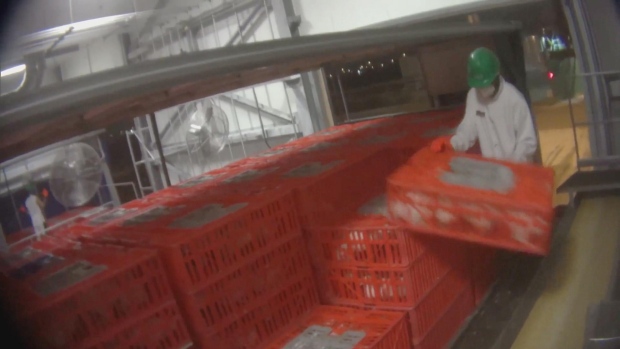 Then they arrive at the beginning of an assembly line.

The video shows workers pulling chickens out of the crates and hanging them upside down by the legs. They have to work fast.

“Each employee is expected to hang 20 birds a minute,” John said. “So employees are hanging birds as fast as they can to keep up. So it’s being grabbed pretty violently. Sometimes you’ll see bones protruding out of the skin, you see toes ripped off. It’s pretty horrific.” 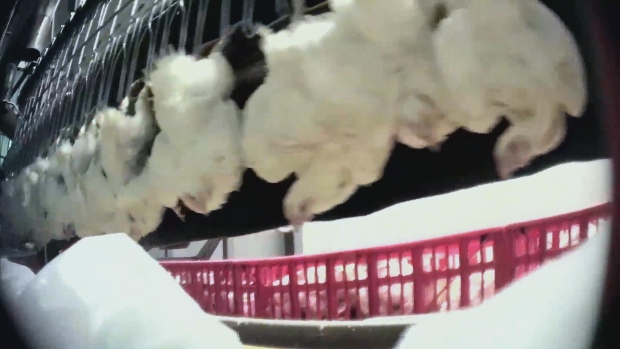 The line carrying the suspended birds then moves quickly through the various stages of the slaughter process.

The heads are pulled through an electrified pool that stuns the animals, and then through a machine that cuts their throats, and finally into scalding tanks that make it easier for another machine to pluck out the feathers. 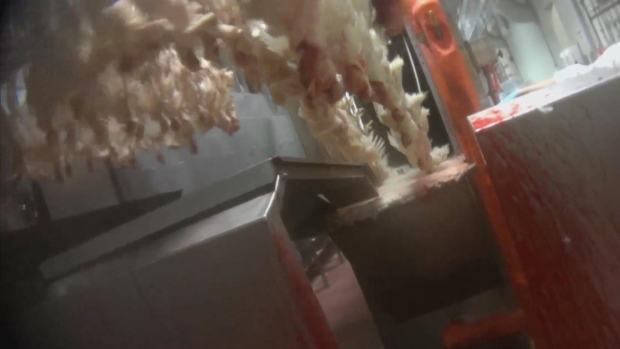 It isn’t pretty, but it is supposed to be efficient, and humane.

Except the Mercy for Animals Canada investigator said he often saw birds come out of the stunning pool conscious, and because of their flapping and struggles to release themselves, sometimes would miss the blade designed to cut their throats.

There is a provision for that. There are employees positioned with knives so they can manually dispatch the birds that have survived till that point.

“They told me they do a thousand a day, sometimes two thousand,” John told W5.

The technology being used at Maple Lodge Farms is standard in the industry. So the inevitable question, is the company actually doing anything wrong?

W5 put the question to one of Canada’s poultry experts who believes that some of the things he saw in the undercover video should not happen. 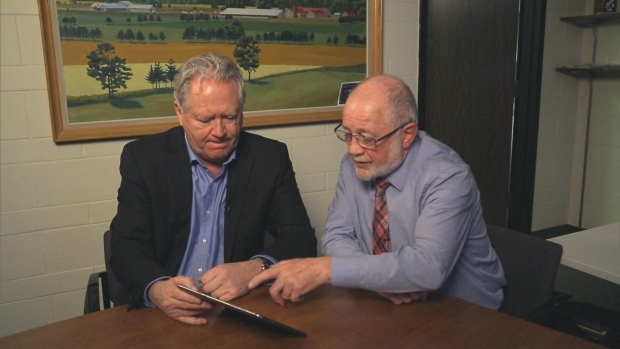 He is Ian Duncan, a professor at the University of Guelph. After looking at video of the way crates were loaded on to the conveyor belt, he said: “That’s unacceptable, throwing them down like that.”

On the physical appearance of some of the birds, he said, “There is a bone sticking through there. Something’s been dislocated. That is very unusual. That shouldn’t happen.” 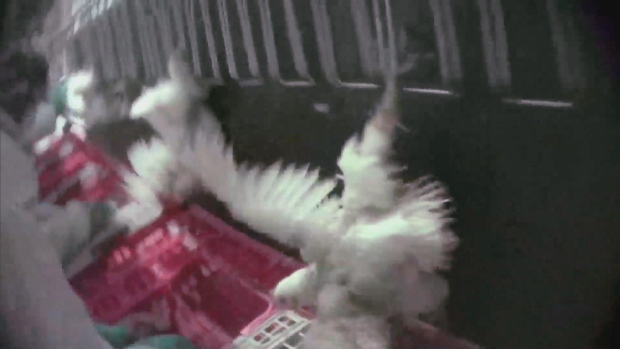 After looking at some birds hanging by one leg instead of two, he said, “That’s unacceptable. It puts huge pressure on the hip joint and there’s also a danger that when it comes to where the bird is to be stunned, it won’t go into the stunning bath properly and won’t meet the knife that’s going to cut its neck.”

When asked if birds could live through that whole process, he answered bluntly. “Yes. Yes.”

Maple Lodge Farms has had trouble before. In September of 2013, it was convicted of two offences under the Health of Animals Act and later pleaded guilty to another 18 counts, all related to “...the failure to prevent undue suffering by undue exposure to weather of a large number of chickens.”

Thousands of birds had died while being transported to slaughter at Maple Lodge Farms. A few of the counts related to inadequate ventilation.

The company was fined nearly $100,000 and put on probation for a period of three years, during which it was expected to comply with numerous conditions.

And now, Mercy for Animals Canada has prepared a complaint that it has forwarded to the federal regulator, the Canadian Food Inspection Agency and the Ontario Society for the Prevention of Cruelty to Animals.

Among the accusations, Mercy for Animals Canada claims:

W5 exchanged several emails and left phone messages with Michael Burrows, the CEO of Maple Lodge Farms, requesting a meeting to show him the undercover video and to get his comment.

In subsequent correspondence, Mr. Burrows wrote us back to say, “Maple Lodge Farms has stringent policies and practises that govern all aspects of animal care and food safety… The humane treatment of the birds we rely on for our livelihood is a priority and a moral responsibility that we take seriously.”

He also wrote that his company was very disturbed by what W5 had told him and he had launched his own investigation of the allegations made by Mercy for Animals Canada. But he never did agree to an interview.

W5 also telephoned and emailed the federal regulator, the Canadian Food Inspection Agency. On repeated occasions, it said it would call back. It never did.

But 20 days after W5 first contacted them, the regulator did sent an email to say “The CFIA is conducting a thorough and careful review of the complaint and will take any necessary measures that it may deem appropriate.”

It added that it has the power to impose fines, and in the event of serious and repeated offences, “...the CFIA may refer non-compliance for criminal prosecution.”

Mercy for Animals Canada is also pushing for major changes to the aging technology prevalent in the business of poultry slaughter.

Instead of the electrified pools being used to stun the birds and the automated cutter used to slice throats, the animal rights organization is openly urging the adoption of what is called Controlled Atmosphere Killing, or CAK for short.

Video from a plant in Norway shows crates of birds arriving at a CAK facility, placed inside a chamber where inert gases replace oxygen causing all birds to slip into unconsciousness and then death. Only then are they handled by humans.

A major retooling of the industry would inevitably be costly and could drive up the price and therefore, reduce the demand for chicken. 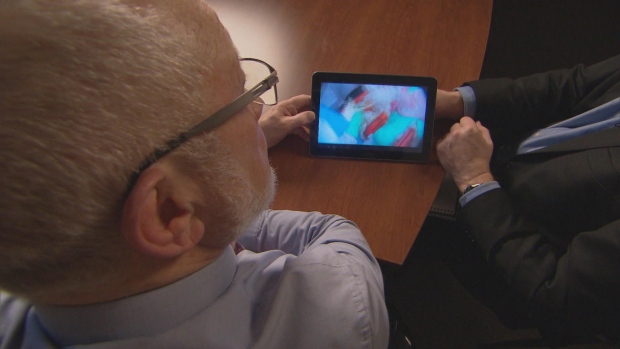 But Duncan suspects the industry will take a hard look at change anyway, especially if the poultry-consuming public begins to take a critical look at how one of their favourite foods actually arrives on their plates.

“If the video showed race horses or some other animal that people valued (being killed this way), there would be a huge outcry,” Duncan said. “Chickens can still suffer.”

Watch W5 Saturday @ 7 p.m. or online at CTVNews.ca/W5 after the televised airing.