Western Hog Exchange in Red Deer, Alta. is the last stop for 2,000,000 pigs before they go to slaughter. It’s a process that is supposed to happen as humanely as possible.

But a hidden camera investigation reveals that this is not always the case at Western Hog Exchange.

An undercover investigator for Mercy for Animals Canada, worked at Western Hog Exchange for two months this summer.

Unbeknownst to her employer, she secretly filmed what was going on inside. She witnessed horrible acts of abuse “animals that were too sick to stand, that were later kicked and abused by employees”.

The hidden camera footage was provided exclusively to CTV’s W5 and the images that were captured are disturbing: pigs coming off trucks limping so badly they could barely walk; pigs so overcrowded into pens they climb on top of each other desperate for space; pigs being beaten and kicked by employees; and pigs that could barely walk being dragged or forced to move by employees wielding electric prods.

The investigator said it was an awful experience, but “I know that at the end of the day, I can go home and these poor animals are stuck there forced to endure this”.

In one hidden camera scene, an employee tries to move a resting pig by kicking it, then shoving it with a metal gate. Another employee joins him and they both kick the pig before dragging it on the ground with the heavy gate, trying to force the pig into a pen. 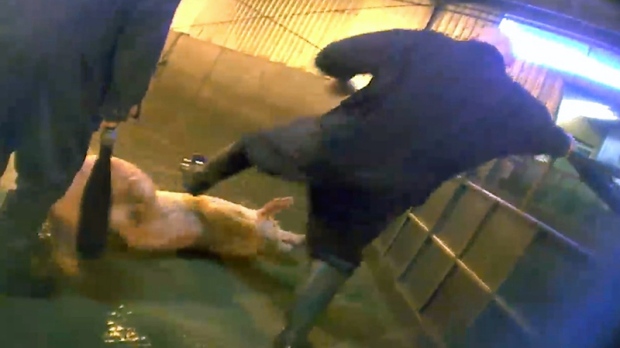 The undercover investigator said that moving group of pigs 70 to 100 at a time was common practice, leading to overcrowding and pigs piling up on top of each other. 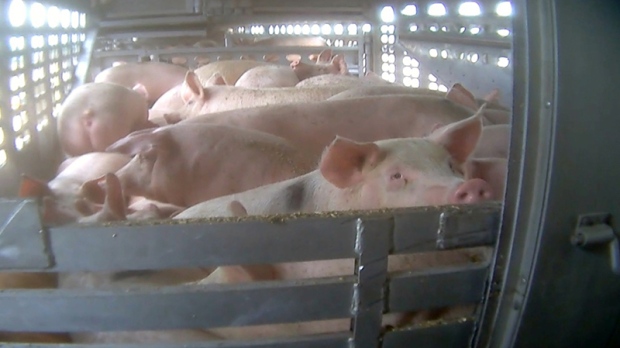 Employees were equipped with a specialized plastic bat filled with pellets that’s meant to be used as a noise maker, to encourage the animals to move.

However some employees used the bats to hit the pigs. In some cases, the animals had no room to move and couldn’t escape the beating. 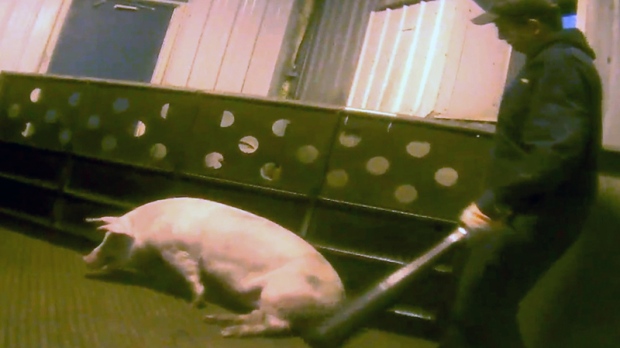 W5 obtained a copy of Western Hog Exchange’s Employee Manual which clearly outlines its animal welfare policy -- and much of it seems like common sense.

However, the hidden camera footage reveals that some of their employees are breaking just about every rule in their own book.

W5 showed the hidden camera footage to Western Hog Exchange Chairman Brent Moen – he said he found some of the incidents portrayed in the video disturbing. “The images that were portrayed were shocking and concerning to me.”

As a result, Moen said he has contracted two separate agencies that are specialists in livestock handling to come in and review Western Hog Exchange procedures to ensure this won’t happen again.

“We will engage those same individuals on a regular basis going forward to come back and audit our process,” Moen said.

“We will update the manual. We will retrain our people in the areas where we’re not in compliance or where obviously we need some improvement.”

Moen told W5 senior reporter Victor Malarek that he is disappointed by what he saw on camera, adding, however, that “I look at this as a tremendous learning opportunity for our organization”. And he promised that over time the situation will improve, “You'll see more respect of the animals and a higher degree of care and compassion.”

“If anybody has a camera, this’ll be on the internet” – CFIA inspector

Western Hog Exchange is a federally licensed establishment and as such, has inspectors from the Canadian Food Inspection Agency (CFIA) on site to ensure compliance with Canada’s humane transportation laws, and prevent the undue suffering of animals from transport to slaughter.

Although CFIA inspectors were on site while the hidden camera footage was recorded, it shows them either failing to act when animals are being abused in their presence or absent from the marshalling area altogether.

In one instance, a worker uses a bat, and then his boots to force a pig to walk, before shoving it into the pen with a heavy gate saying the pig “can walk when he wants to.” While this was happening, the CFIA inspector was in the office.

In another case, the hidden camera shows dozens of pigs jammed into an alley with nowhere to move, piling up on top of each other. An employee hits the pigs at the back of the group with a bat even though they have no room to move forward.

A CFIA inspector is present and she picks up a bat and bangs on the wall, adding to the mayhem. The inspector never appears to tell the employee to stop hitting the pigs.

At other times on hidden camera, CFIA inspectors actually grab electric prods for workers to use on pigs, including a pig that couldn’t walk and had to later be put down. Keep in mind, the use of electric prods in the barn is a clear violation of Western Hog Exchange regulations. 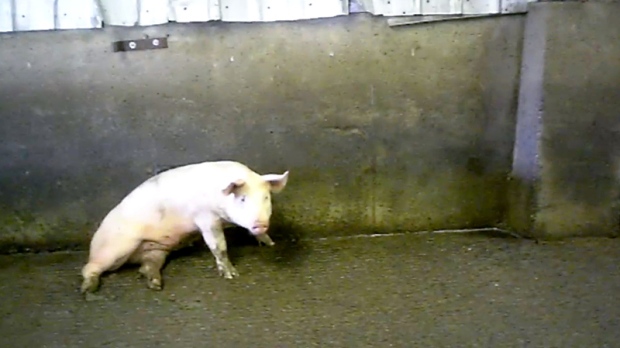 The undercover investigator who recorded the footage said that she felt the CFIA inspectors were somewhat too cozy with the employees at Western Hog Exchange. “It seemed as though they were there to be a presence, to give people assurance that animal welfare is being taken care of. But I didn’t see them doing anything to really enforce that.”

In one recorded moment, a CFIA inspector appears to be primarily concerned with the optics of what’s going on around her. As a couple of dead pigs are pulled off a trailer, she comments: “If anybody has a camera, this’ll be on the Internet.” 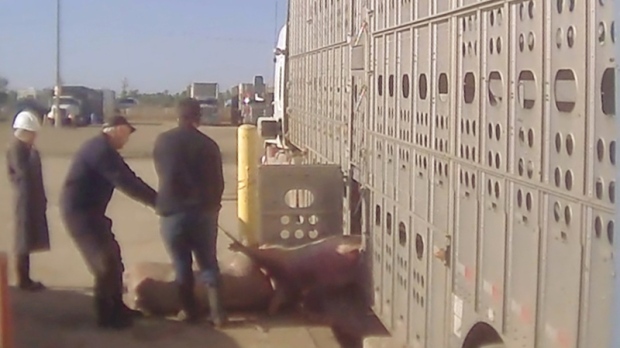 When the Mercy for Animals investigator reported one person who was rough handling the pigs to a CFIA inspector, she said the inspector followed her, not the person who was abusing the animals. “I kind of felt it was almost sending me a message”.

CFIA: No issues of non-compliance

W5 asked the CFIA for information on what their inspectors found this summer while hidden cameras were rolling. They said they conducted 84 “humane transportation verifications” from May to August 2014 and issued no non-compliance reports. That means not one violation or even a single warning from the CFIA.

In fact, the CFIA added that there had been “no issues of non-compliance identified by the CFIA against the Western Hog Exchange in the past year and therefore, no enforcement actions taken by the CFIA” during that time.

W5 tried for weeks to get an interview with Bruce Archibald, President of the CFIA, or other officials at their headquarters in Ottawa, offering to show the hidden camera footage prior to an interview. But they repeatedly turned down the requests.

CFIA did send a statement saying “The CFIA does not condone or tolerate any abusive behaviour towards animals and investigates all allegations of animal mistreatment.

“The CFIA enforces the humane treatment of animals in accordance with the Health of Animals Regulations and the Meat Inspection Regulations. …these regulations aim to prevent the undue suffering of animals during transport and during slaughter at federally registered facilities” and… “require that animals be in good physical condition to travel and that the trip be made under suitable conditions (ventilation, duration, loading density and proper constructions of trailers and conveyances.”

Seeking further information, W5’s Malarek approached Archibald in person outside the CFIA’s headquarters, recorded by a camera crew. The next day the CFIA seemed to have a change of heart and offered an unnamed spokesperson in Calgary to comment, but only if the footage taken of Archibald, as well as footage of the CFIA headquarters, not be used in the story. W5 did not agree to the condition.

W5 also requested an interview with the Minister of Agriculture and Agri-Food Gerry Ritz, about Canada’s transportation regulations and CFIA oversight, but he was unavailable for an interview.

His office sent a statement saying:

“Our government expects all businesses to adhere to Canada’s strict animal welfare laws. As a Government, we have increased the CFIA’s ability to levy fines and criminal charges for animal cruelty should charges be warranted. We expect anyone found violating these laws will be prosecuted to the fullest extent possible.”

W5’s documentary These Little Piggies will be broadcast Saturday @ 7 p.m. on CTV.