“This was the most depressing time I had in my whole political life.”

MONTREAL -- Marc Lalonde is 90 years old and he tells me: “almost retired.” In 1965 as a young Montreal lawyer, Lalonde went to Ottawa to work for Prime Minister Lester Pearson.

He was the only French Canadian in the Prime Minister’s Office and one of his jobs was to brief Pearson on Quebec politics. Lalonde remembers there “were rising concerns about what was happening in Quebec.”

In the 1960s, Quebec was changing rapidly. It was called a “Quiet Revolution” as economic and social change rippled through the province.

The pace of change was not fast enough for a small radical element in Quebec. It wanted nothing less than an independent, socialist Quebec.

In 1963, a group of those young radicals formed the Front de Liberation du Quebec, the FLQ. It took up arms and began a seven-year campaign of violence. 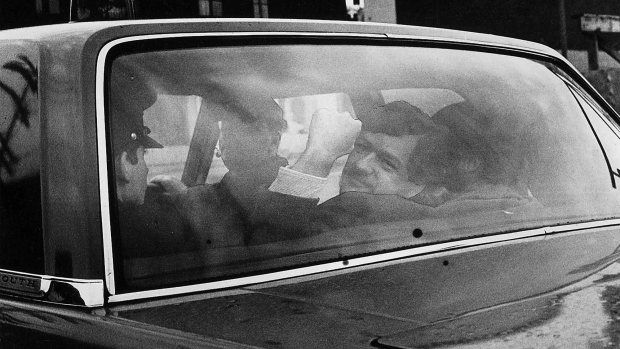 Suspected separatists are brought into a police station Oct. 16, 1970, as soldiers and police make arrests in separatist areas under the extended provisions of the special war emegencies act (THE CANADIAN PRESS)

Today, Lalonde is the only Canadian left who can tell the story of the FLQ crisis from inside the Prime Minister’s Office. When I reached out to him to share his account of the impact of the Front de Liberation du Quebec, Lalonde agreed immediately.

For Lalonde, the FLQ’s actions were the starkest indication of a rising nationalism in Quebec. “I was shocked and amazed that people would think that they would need to resort to this kind of action to make that point,” he said.

The FLQ objective was clear from the outset. Its first manifesto, in April 1963, vowed: “To arms! The hour of national revolution has come! Independence or death!” 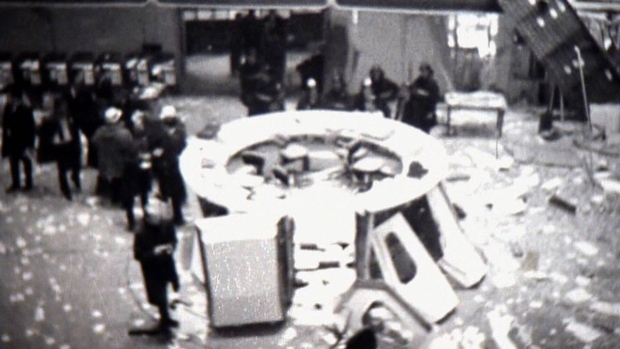 A bomb planted by the FLQ was detonated inside the Montreal Stock Exchange building on Feb. 13, 1969, injuring 27 people (CTV)

And that month the terror campaign claimed its first victim, a security guard killed by a bomb. A few weeks later, a bomb disposal expert was seriously maimed trying to defuse one of 10 bombs planted in mailboxes in Westmount.

By 1968, when Pierre Trudeau became prime minister, the bombing campaign was growing and becoming more brazen. Lalonde was now Trudeau’s principal secretary and remembers there was a growing awareness of the impact of the FLQ terrorism. Seven long years of FLQ bombs had claimed six lives and injured many more.

On October 5, 1970, the FLQ raised the stakes, kidnapping British Trade Commissioner James Cross in Montreal. It was North America’s first political kidnapping and began what is now known in Canadian history as the October Crisis.

“Nobody expected this to take place, honestly. It was a total shock and a clear challenge to the federal government,” said Lalonde. The crisis deepened five days later when another FLQ cell kidnapped Pierre Laporte, the Quebec labour minister.

Trudeau used Lalonde to stay on top of developments in Quebec. Lalonde was told that if the government didn’t do something, “the situation would get out of control.” 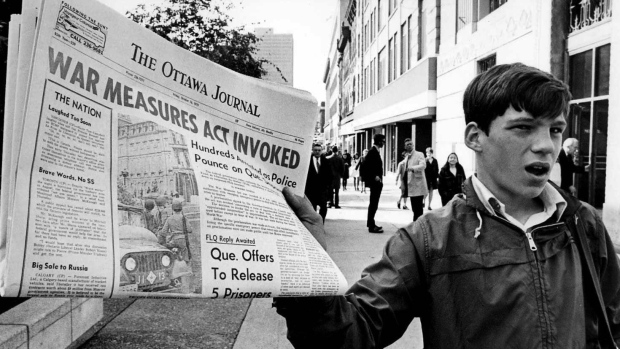 Lalonde remembers the cabinet “spent a lot of time looking at alternatives and finally gave up.” The consensus was that only the War Measures Act would give the government the powers it needed to stop what appeared to be an FLQ insurrection.

The Act, first passed at the beginning of the First World War, gave the government unprecedented powers in peacetime. Within days, almost 500 people were arrested.

The arrests and the army on the streets of Ottawa and in Quebec did not stop the FLQ. Less than 48 hours after invoking the War Measures Act, the body of Pierre Laporte was found in the trunk of the same car used to kidnap him.

Lalonde believes by killing Laporte, the FLQ lost all its support in Quebec. “I think the kidnapping of Laporte and the assassination of Laporte revolted Quebeckers,” he said.

For Marc Lalonde the events of October Crisis marked “the most depressing time” in his political career. He says he had “the feeling of seeing Quebec society destroying itself.”

With the demise of the FLQ, the fight for Quebec independence moved to the ballot box. Negotiating Quebec’s role in Canada took up many hours of Lalonde’s political years in Ottawa.

In his home, looking out on the St. Lawrence River, Lalonde reflects on Quebec’s place in Canada, 50 years later: “I am confident about the future and I think Quebeckers are reconciled that the notion that their best future is within Canada rather than separate from Canada.”