Concussions in the NHL: By the numbers

Hockey thrives off of crushing body checks and game-stopping fist fights, but it’s the long-term consequences of on-ice violence the NHL seems less than eager to advertise.

In fact, at the request of the league, a court has sealed the majority of 2.5 million pages of internal documents related to a lawsuit brought forth by more than 100 former NHL players.

At the heart of the lawsuit are concussions – the players allege league officials knew or ought to have known about the long-term cognitive effects of head trauma, but failed to protect players.

Concussions in the NHL

In terms of prevalence in the league, a seven-year studied published in 2011 by the Canadian Medical Association Journal tallied a total of 559 concussions over seven NHL regular seasons.

With averages ranging from 4.6 to 7.7 concussions per 100 NHL players per season, it’s likely that each of the 30 teams in the league will see at least one or two players miss time due to a concussion every year.

Severity of concussions can vary, as can symptoms experienced by those who experience them. Out of 14 different symptoms, these are the top eight most frequently reported by NHLers.

Certain symptoms were also predictors of whether a player would miss time playing after being concussed. A post-concussion headache, experiencing low energy or fatigue, amnesia, or having an abnormal neurological examination were all correlated with time loss among players. Headaches and low energy or fatigue in particular were associated with players missing 10 or more days.

And while many players miss no more than a few games from a hard hit to the head, there are many cases of players missing months or even ending their careers over serious concussions and the post-concussion symptoms that persist for months or years after the injury.

Below are a few notable cases of players who’ve dealt with serious concussion issues throughout their career. 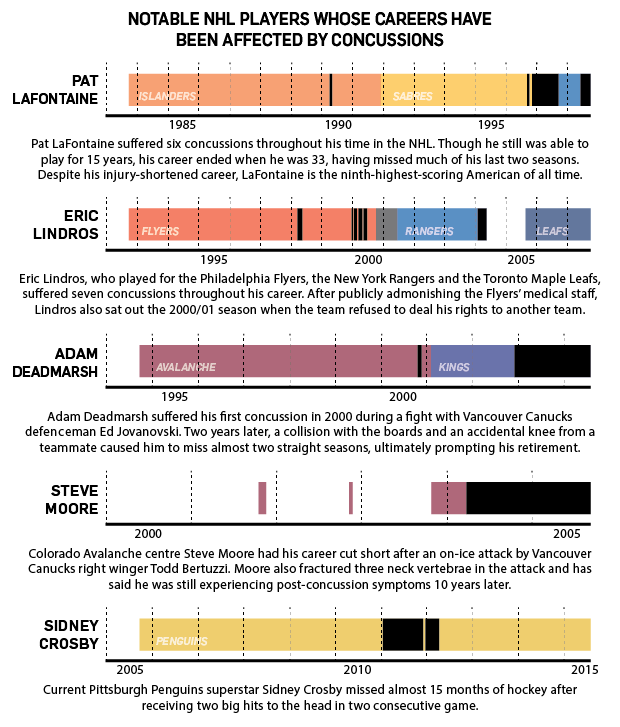 Rule changes in the past years

There have been a few changes related to player safety in the past few years. Most recently, hybrid icing was introduced in 2013 to eliminate the race between two players for an iced puck that sometimes ended in a high-speed collision with the boards.

Also in 2013, an extra minor penalty was introduced for a player removing their helmet before a fight.

In 2010, a penalty was introduced for “a lateral or blind side hit to an opponent where the head is targeted” -- a rule which was rewritten the next year to include a penalty for headshots from any direction.

The NHL also introduced a new concussion protocol in 2011, which began forcing teams to remove players suspected of having a concussion from the game to be evaluated in “a quiet place free from distraction” by a physician.

In 2015, the league also began having “concussion spotters” at every game to identify players who might have suffered a head injury.