Alone at 19: What happens to youth who are aged out of Canada's foster care system?

VANCOUVER -- Nineteen is an exciting time of life filled with new challenges and opportunities. Many teenagers are focused on preparing for post-secondary education, looking for a job or finding their first apartment.

But for kids who grow up in foster care, turning 19 can be incredibly daunting. In B.C., this is when most age out and get cut off from emotional and financial support, leaving them at risk for poverty, drug use and suicide.

On a grey, hazy Friday, 50 B.C. teenagers came together outside Vancouver City Hall to blow out symbolic birthday candles and mark what a 19th birthday should look like for teens leaving care.

A 2018 report released by the B.C. Coroner’s Service said young people transitioning from government care to independence died at five times the rate of their peers – a statistic which does not sit well with Dylan Cohen.

He’s leading the birthday celebration as a youth advocate for the B.C. program ‘Fostering Change’ and helps transition struggling teens out of care. He grew up in foster care in Manitoba. 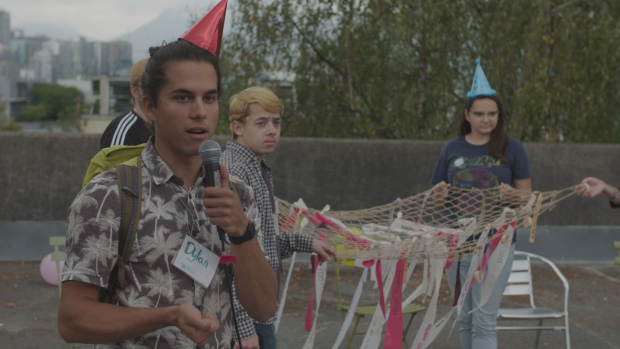 Kian Fernandez aged out two years ago and is still finding life challenging.

In an interview with W5, Kian explains how she was kicked out of her home at the age of 16 and lived in a homeless shelter and safe house until the B.C. Ministry of Child and Family Development provided her with financial, educational and mental health support.

When she aged out, Kian was eligible for Agreements with Young Adults (AYA) – a program offered by B.C. to those who are at least 19 and enrolled in a school or life skills program. Most teens find it hard to qualify. In fact the pressure was too much for Kian - she checked herself into a psychiatric ward two months into AYA.

Nowadays, she lives on disability income and does the best she can to avoid becoming another statistic.

“I do a little bit of work and I mostly just kind of go to therapy. I try to take care of myself the best I can.”

Across the country, the criteria for aging out varies from province to province with most beginning the process at the age of 18.

Dylan and Kian both consider themselves lucky, unlike others who have a difficult time.

Alex Gervais was taken into care when he was four-and-a-half years old. He lived in 17 different foster placements and was shuffled through 23 different social workers. At the very end, he was alone.

The caregiver tasked with supervising him was absent from the hotel where Alex reluctantly lived for 49 days. Alex Gervais jumped to his death, just eight months before his 19th birthday.

Al Hoolaeff was Alex Gervais’ caregiver for seven years. He still vividly remembers the phone call he received from Alex’s social worker telling him the news. Alex’s death continues to haunt him – and probably always will.

“I don’t think that I could take another suicide,” he tells W5.