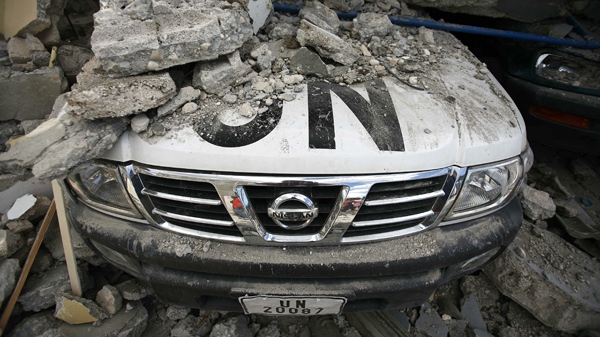 A UN car is covered in rubble the day after an earthquake hit Port-au-Prince, Haiti, Wednesday, Jan. 13, 2010. (AP / Ricardo Arduengo)

The U.N. chief said 16 U.N. personnel were confirmed dead late Wednesday in the earthquake that decimated Haiti's capital, with 100 to 150 U.N. workers still unaccounted for, including the mission chief and his deputy.

Secretary-General Ban Ki-moon announced that 11 Brazilian peacekeepers and five international police officers -- three from Jordan and one each from Chad and Argentina -- were killed in the "horrendous" quake.

U.N. officials said 56 others were injured. Seven who were seriously hurt were evacuated from the country, they said.

"Many continue to be trapped inside U.N. headquarters and other buildings," said Ban, noting that includes the U.N.'s mission chief, Hedi Annabi, and his chief deputy, Luis Carlos da Costa. "Other peacekeepers and civilian staff from many member states remain unaccounted for."

U.N. peacekeeping chief Alain Le Roy said at least 10 people were pulled alive on Wednesday from the lower floors of the five-story headquarters building for the U.N. peacekeeping mission, which collapsed in Tuesday's magnitude 7.0 earthquake quake.

Annabi, a Tunisian diplomat who has worked for the U.N. for 28 years, and da Costa, a Brazilian whose U.N. career spans four decades, were missing. Also unaccounted for was an eight-member police delegation from China that Annabi was meeting in an office on the headquarters' top floor when it collapsed, U.N. officials said.

"It is our estimate that around hundreds of people were still working inside the building," Ban said. "Therefore it will be in the range of 100 to 150 that I'm quite concerned about."

Ban said he was immediately dispatching Assistant Secretary-General for Peacekeeping Edmond Mulet, who was Annabi's predecessor in Haiti, to Port-au-Prince to take over as acting chief of the U.N. mission and co-ordinate the international emergency aid effort.

"Most urgently is the emergency search and rescue: People buried under the rubble are still alive. We must save them, as many as possible, and we must move immediately," Ban said. "To the people of Haiti, I say this: We are with you. We are working quickly, as fast as humanly possible."

Ban said one Chinese and at least two U.S. search and rescue teams should have arrived in Haiti by Wednesday night, with two more U.S. teams expected to arrive Thursday. He said Mullet would try to meet with Haitian President Rene Preval and other government leaders immediately after his arrival. Ban said his office was unable to directly contact Preval.

"Saw hundreds of bodies in the street this morning and people trying to reach survivors under buildings and carrying the wounded on doors and makeshift stretchers. Most everything above one-story has been levelled," and there have been "more than 30 aftershocks," Montas wrote in an email as read aloud to reporters by Nesirky.

Le Roy said the Villa Prive and the Hotel Montana, where a large number of U.N. staff lived, also were damaged. He said it was not known how many U.N. personnel were in the buildings at the time.

Helen Clark, head of the U.N. Development Program, said 38 UNDP staff are unaccounted for, including 10 believed to have been in the building adjacent to the agency's main office, which collapsed.

Le Roy said the 3,000 troops and police in Port-au-Prince are securing the airport and port, patrolling, and helping to clear roads in addition to digging in the rubble of the collapsed headquarters building.

The U.N. is operating out of its logistics base near the airport, which was not seriously damaged, he said.

Susanna Malcorra, the undersecretary-general for the department that staffs and equips U.N. field-based peace operations, said the Brazilian peacekeeping contingent includes an engineering unit which is moving "with a lot of caution" at the toppled headquarters building because they don't have the expertise in dealing with people trapped under rubble nor the specific tools to handle it, including sensors to listen for signs of life.

The engineers are trying "to ensure that they don't produce more damage to the building than has already happened," she said.

"We need guidance from the rescue teams to make sure that we maximize the use of our engineers properly," Malcorra said.

Ban urged the international community "to come to Haiti's aid in this hour of need" and announced that the U.N. would provide $10 million for immediate relief from its emergency fund "to kick start" the global response.

Late Wednesday, Ban met with former U.S. president Bill Clinton, his special envoy to Haiti, and they then attended a meeting of the General Assembly where many countries announced pledges of aid to the devastated country.

Ban said he asked Clinton to look at plans for medium- and long-term economic and social reconstruction of the country.

Clinton, who has been focusing on raising money to rebuild Haiti after devastating cyclones in 2008, said "maybe a third of the country" has been affected by the quake. He urged people to send cash -- not supplies -- to buy food, water, shelter materials and first aid supplies.

He urged member nations to provide Haiti the aid they previously pledged. "We need those commitments," Clinton said.