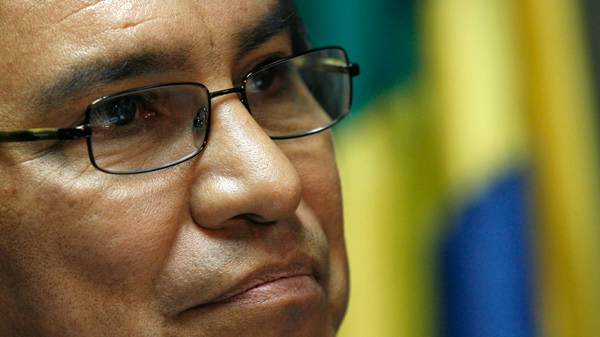 The United Nations special envoy for aboriginal peoples has criticized Canada's federal government for "the dire social and economic condition" of residents in the beleaguered community of Attawapiskat.

James Anaya, the UN special rapporteur on the rights of indigenous peoples, issued a statement Tuesday saying he wrote to the Harper government on Monday to express his concerns about the reserve, which is dealing with a dire housing crisis.

"I have been in communication with the government of Canada to express my deep concern about the dire social and economic condition of the Attawapiskat First Nation, which exemplifies the conditions of many aboriginal communities in the country," Anaya said in the statement issued from Geneva.

In his letter to Canadian officials, he asked for more information about funding, policies and respect for human rights.

"The social and economic situation of the Attawapiskat (community) seems to represent the condition of many First Nation communities living on reserves throughout Canada, which is allegedly akin to Third World conditions," he said.

The Assembly of First Nations appealed to the UN earlier this month to investigate conditions in Attawapiskat, as well as whether the federal government was meeting its obligations under both international and national treaties.

The government immediately fired back at Anaya, accusing him of spreading misinformation to grab headlines. Michelle Yao, a spokesperson for Aboriginal Affairs Minister John Duncan, said that among other inaccuracies, the letter is addressed for former foreign affairs minister Lawrence Cannon, who was defeated in the May election.

"Anyone who reads the letter will see it lacks credibility," Yao said in a statement.

"Our government is focused on the needs of the residents of Attawapiskat -- not publicity stunts."

A local health centre is being retrofitted to serve as temporary housing, and the federal government has purchased 22 new modular homes.

Duncan has been at odds with community leaders in Attawapiskat for weeks, after Chief Theresa Spence declared a state of emergency over a housing crisis that has pushed dozens of families out of mould-infested homes and into makeshift shelters such as tents and un-insulated cabins.

Duncan sent a third-party manager to the community over concerns that $90 million in federal funding had been misspent, but Spence and band council members argued the band's finances were not the central issue and were laid bare in quarterly reports.

While Anaya has no authority to force sovereign governments to enact or change policies, he is tasked with probing the living conditions of indigenous peoples around the world. He can issue reports that contain recommendations for improving the lives of indigenous peoples, but can also spur governments to action by shaming them in front of the international community.

Anaya said despite the fact Canadians enjoy some of the best living conditions in the world, aboriginal peoples often endure higher unemployment and poverty rates, less education and poorer health.

Anaya said he would like to hear a response to his letter from the federal government and said he will continue to monitor the situation in Attawapiskat.

NDP MP Charlie Angus, whose riding includes Attawapiskat and who has publicized the community's plight in the House of Commons, invited Anaya to Canada so he could view the situation for himself.

"This crisis has been going on for months," Angus said in a news release. "Families will be spending winter in tents in Attawapiskat and the Conservatives just don't seem to care. Conservative inaction is a disgrace and giving Canada a black eye in front of the world."

The Canadian Red Cross has responded to the crisis in the community by delivering emergency supplies, including generators, blankets and warm clothing. The agency has also raised about $300,000 to purchase further supplies.