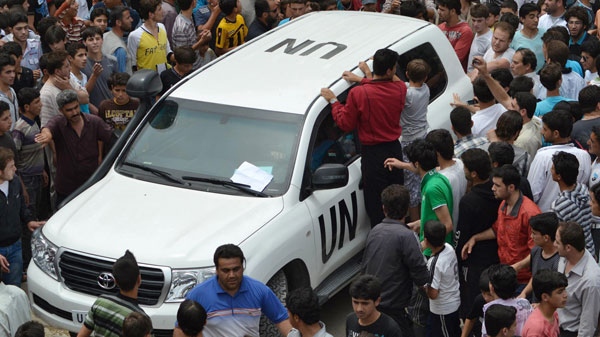 In this citizen journalism image, Syrians gather around a U.N. observers vehicle during a demonstration in Kfarnebel, Idlib province, northern Syria on Tuesday, May 29, 2012. (AP / Edlib News Network)

BEIRUT - Syrians fled a new round of government shelling Thursday in the area where more than 100 people were massacred last week, activists said, as the UN chief pleaded with the regime to stop its attacks.

The assault came nearly a week after 108 people, many of them women and children, were killed in the area. Activists said government forces first shelled the area on Friday, then pro-regime fighters known as shabiha stormed the villages. The Syrian government denied its troops were behind the killings and blamed "armed terrorists."

Facing international outrage over the killings, Damascus said it would conduct its own investigation into the Houla deaths. It was expected to announce the findings at a news conference later Thursday. Syria also announced that special prayers for the victims would be held at Syrian mosques across the country on Friday.

The Houla massacre was one of the deadliest incidents since the uprising against President Bashar Assad's regime started in March last year. The UN said several weeks ago that more than 9,000 people have been killed in the past 15 months while activists put the number at about 13,000.

Persistent bloodshed despite a cease-fire agreement has raised pressure on the international community to act.

But Secretary of State Hillary Rodham Clinton laid out the clearest case yet for why the Obama administration is reluctant to intervene militarily in Syria even as the U.S. expressed revulsion over the Houla killings.

Clinton said Russia and China would have to agree before the U.S. and other nations engage in what could become a protracted conflict in support of a disorganized rebel force.

"We're nowhere near putting together any type of coalition other than to alleviate the suffering," Clinton told reporters Thursday after meeting with top officials in Denmark, a key contributor to last year's NATO-led mission against Moammar Gadhafi in Libya.

Thursday's shelling appeared focused on the Houla village of al-Tibeh. The Observatory reported that residents were fleeing to nearby towns and villages "fearing a new massacre" as the area again came under fire.

Nearly 300 UN observers have been deployed around Syria to monitor a cease-fire that was supposed to go into effect on April 12 as part of a peace plan negotiated by international envoy Kofi Annan. But the plan has unraveled amid daily visit and the images from the Houla massacre caused outrage to spike.

"The massacre of civilians of the sort seen last weekend could plunge Syria into a catastrophic civil war - a civil war from which the country would never recover," Ban said Thursday in Istanbul. He added that the international community was united in demands that the Syrian government act on its responsibilities to its people.

"We are there to record violations and to speak out so that the perpetrators of crimes may be held to account," Ban told a summit of the Alliance of Civilizations, a forum promoting understanding between the Western and Islamic worlds.

"Let me state plainly, however: The UN did not deploy in Syria just to bear witness to the slaughter of innocents," he added. "We are not there to play the role of passive observer to unspeakable atrocities."

Annan, meanwhile, arrived in Lebanon, where 10 people were killed in clashes between pro- and anti-Syrian groups, raising fears the conflict could spread to neighboring countries.

In the wake of last week's massacre, the United States, Western and Asian nations expelled Syrian diplomats in protest.

Also Thursday, Syria's state-run TV said 500 people who had gotten involved in recent events in Syria were released from detention. It gave no further details.

In Damascus, the Syria International Islamic Bank, or SIIB, criticized the latest sanctions imposed Wednesday by the Obama administration as "irrational and unjustified."

The Treasury Department said Wednesday that SIIB has been acting as a front for other Syrian financial institutions seeking to circumvent sanctions. The new penalties will prohibit the bank from engaging in financial transactions in the U.S. and will freeze any assets under U.S. jurisdiction.

SIIB said it would undertake all necessary measures toward the U.S. decision, saying it has no assets or accounts in the United States. It added that the bank, like other Syrian banks, halted all banking operations with the dollar since U.S. sanctions were first imposed on Syria.

With Washington unwilling at this point to pursue military options in Syria, the U.S. has relied heavily on economic sanctions as a means for pressing Assad to leave power. The United States will host other nations in Washington next week to look at ways to tighten international sanctions further.