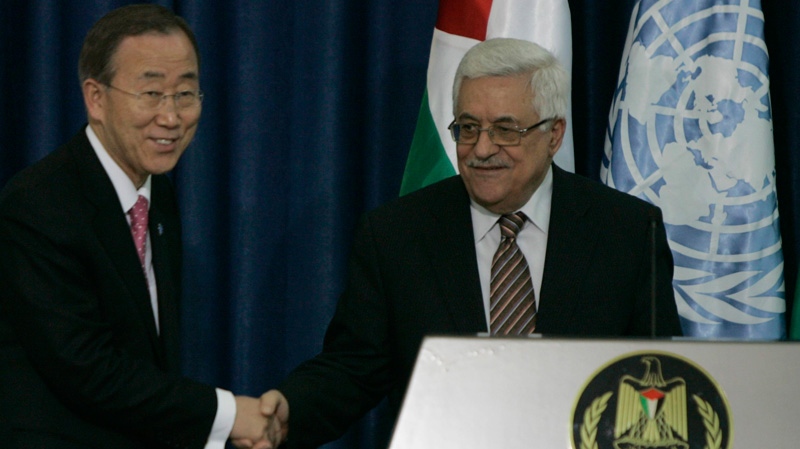 Israel must halt settlement building and present detailed proposals for a border with a future Palestinian state, visiting U.N. chief Ban Ki-moon said Wednesday, as he tried to persuade the Palestinians to continue low-level meetings with Israel that the international community hopes will evolve into serious negotiations.

Ban praised Palestinian President Mahmoud Abbas for his leadership and publicly backed him on key issues, including the demand for a freeze of settlement building on occupied lands the Palestinians want for their state.

With Abbas by his side, the U.N. chief affirmed that "all Israeli settlements are contrary to international law and prejudice" the outcome of a final peace deal.

At the same time, Ban urged the Palestinian leader not to let the current peace efforts lose momentum. The dialogue on borders and security arrangements began last month at the urging of the Quartet of Mideast mediators -- the U.S., U.N., EU and Russia -- which asked both sides to submit detailed proposals. The Quartet has said it wants a final deal by the end of the year.

Abbas has said the Jordanian-mediated exploratory meetings in Amman have run their course, but that he'll decide after consultations with the Arab League next week whether to resume them. "I don't like the word 'closing the door to negotiations."' Abbas said Wednesday. "Israel did not present encouraging offers in the Amman talks, but if it does, we will be ready (to resume talks)."

Earlier Wednesday, Ban met with Israeli Prime Minister Benjamin Netanyahu, who has rejected Palestinian demands for a settlement freeze ahead of any full-fledged negotiations, arguing that this is an unacceptable precondition.

Israel has said it wants to continue the exploratory talks.

"We are at a critical moment for Israel and the region," Ban said after his talks with Netanyahu. "I remain hopeful that the direct, frequent exchanges between the parties with continue."

Formal peace talks have stalled for more than three years, in large part over the settlement issue. The Palestinians say there is no point in negotiating as long as Israel continues to settle its population in the West Bank and east Jerusalem -- areas that the Palestinians want for their future state, along with the Gaza Strip.

Some 500,000 Israelis now live in these areas, and this week Netanyahu's government approved new financial incentives meant to lure more Israelis to the West Bank.

Continued settlement "does not help the ongoing peace process," Ban said. "They should refrain from further settlement for the sake of ongoing peace talks. This can be a way of expressing goodwill gestures."

Netanyahu appeared to rebuff Ban's request, saying the question of settlements "should be part of the final peace talks and final peace agreements." Later Wednesday, Netanyahu spoke by phone to U.S. Secretary of State Hillary Rodham Clinton. "Israel is interested in continuing talks with the Palestinians while maintaining security for Israel's citizens," Netanyahu told Clinton, according to his office.

Ban, meanwhile, appeared to take the Israelis to task for not having submitted detailed proposals on borders and security yet, as requested by the Quartet. The Palestinians say they have presented four-page papers on each issue, while Israel presented only general principles for border talks last week

Ban said he noted "with appreciation that the Palestinian Authority is forthcoming in presenting concrete proposals for territory and security, as called for by the Quartet," adding that he hopes "that now Israel will present its proposals."

Palestinian officials have said the Israeli principles mean, in effect, that Israel wants to keep east Jerusalem and large chunks of the West Bank. Any proposal that leaves all of east Jerusalem under Israeli control is likely to be rejected by any Palestinian leader.

Responding to Ban's comments, Netanyahu said he recognizes "there has to be an agreement, probably a painful agreement for us given our passion for these historic lands." But he complained that "the real cause of this conflict" is the Palestinians refusal to recognize Israel as the homeland of the Jewish people.

Israel has also accused the state-run Palestinian media of broadcasting hatred and incitement against Israel and Jews. Asked about the alleged incitement, Ban said: "Hate speeches or provocations, they are not helpful, they are not acceptable."

As part of his West Bank visit, Ban toured the site of the first planned Palestinian city in the West Bank. Construction of the new city, called Rawabi, has been slowed by Israeli security concerns about a planned access road. However, developers said they now have Israeli permission for paving a road for construction vehicles and that they hope to complete the project by 2013.

Ban said he visited the project to encourage sustainable development.