U.S. cuts funding for UNESCO with Palestinans aboard 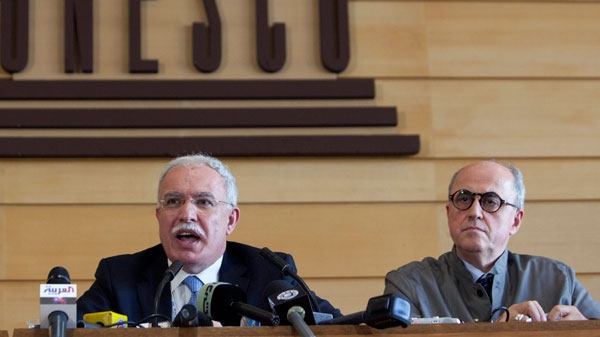 PARIS - The Obama administration cut off funding for the UN cultural agency on Monday, after its member countries defied an American warning and approved a Palestinian bid for full membership.

State Department spokeswoman Victoria Nuland said the vote triggered a long-standing congressional restriction on funding to UN bodies that recognize Palestine as a state before an Israeli-Palestinian peace deal is reached. She said the U.S. as a result would refrain from making a $60 million payment it planned to deliver in November.

"Today's vote by the member states of UNESCO to admit Palestine as a member is regrettable, premature, and undermines our shared goal of a comprehensive, just and lasting peace in the Middle East," Nuland told reporters. "The United States remains steadfast in its support for the establishment of an independent and sovereign Palestinian state, but such a state can only be realized through direct negotiations between the Israelis and the Palestinians."

The U.S. will maintain its membership and participation in the body, Nuland said, though it was not immediately clear how that would work if it was no longer paying its share of the costs. UNESCO depends heavily on U.S. funding -- Washington provides 22 per cent of its budget -- but has survived without it in the past: The United States pulled out of UNESCO under President Ronald Reagan, rejoining two decades later under President George W. Bush.

The UNESCO vote represented a fallback plan for the Palestinian leadership that presented its plan for UN recognition as a state and full membership in the global body in September. Israel has fiercely opposed the bid, and it has no chance of passing because the Obama administration has promised to veto any resolution in the Security Council.

Nuland said U.S. payments to the Paris-based organization stopped effective Monday. While more than 150 countries voted for the Palestinian bid or abstained, Nuland insisted that their decision "creates tensions when all of us should be concerting our efforts to get the parties back to the table."

The U.S. has long brandished the Palestinian efforts at the UN as counterproductive to the Mideast peace process. But Washington has been unable to present a viable alternative, after a year when Israelis and Palestinians have refused to hold any direct talks on the parameters of peace agreement with one another.