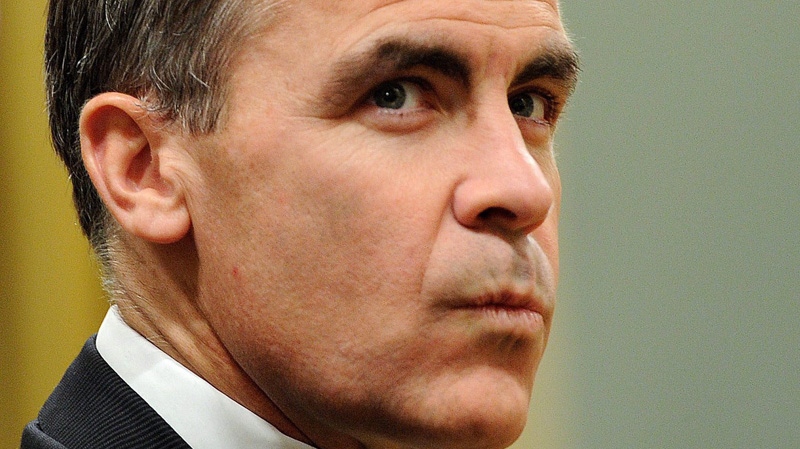 OTTAWA - Canada is launching a full-court press in an attempt to prevent the United States from passing new bank reforms that may impact Canadian investors, financial markets and the economy.

In separate letters to Washington policy-makers, Finance Minister Jim Flaherty and Bank of Canada governor Mark Carney complain that sweeping reforms under the so-called "Volcker rule" would reach well beyond their intended scope, and beyond borders.

In some cases, because of the differences between the two countries' financial systems and exemptions that apply only in the U.S., the negative impact could be greater in Canada, officials say.

"The rule, as currently drafted, would have an unprecedented extraterritorial reach and significant cross-border effects ... given the close inter-linkages between the Canadian and U.S. financial systems," Flaherty wrote Monday.

"I am particularly concerned that the proposed rule could severely impact the liquidity of Canadian government debt markets and interfere with the risk management practices of Canadian banks."

Bank of Montreal economist Douglas Porter said while the proposed changes are complex and the impacts difficult to quantify, the fact Flaherty and Carney would write their counterparts with concerns is a good indicator the affect could be severe. The Office of the Superintendent of Financial Institutions has also formally requested changes to the bill.

Not only Canada has complained, so has the United Kingdom, Japan and the European Commission, among others.

For Canada, the major concern is that the banks' ability to trade and make markets in government and corporate bonds could be curtailed, causing borrowing costs to rise.

"If the liquidity of corporate debt and government debt is somehow compromised, that will have a ripple effect on the economy as a whole and will impact corporations' ability to grow and create jobs," said Terry Campbell, president of the Canadian Bankers Association.

"The problem is that the rule does not just apply to Canadian bank operations in the United States, it would apply to their operations around the world."

The changes, which seek to separate the traditional deposit-taking functions of banks from their more risky investment operations, are part of wider reforms being proposed to limit risk-taking by U.S. banks in response to the abuses that led to the recent recession.

Flaherty and Carney said they respect the intent of the law, but not how it would impact institutions outside the country. Most Canadians banks have operations in the United States so interlinked that even strictly Canadian activities could come under the broad sweep of the changes.

"The proposed rule ... imposes significant restrictions on Canadian banking entities by limiting their use of U.S.-based resources, personnel and market infrastructure and by preventing them from trading with U.S. counterparties," Carney said in his letter.

Carney noted that market funding supplies about two-thirds of Canadian corporations' financial needs, so the Volcker rule could have severe impact on liquidity and borrowing.

As well, while U.S. government treasury sales are exempted, Canadian government bonds are not.

And the letters say the rule could limit Canadian banks ability to service their customers with mutual fund accounts.

"I would encourage you, your staff, and the relevant U.S. regulatory agencies to take careful note of these submissions," Flaherty said in his letter.

"I urge you and your colleagues to take careful consideration of any unintended consequences that U.S. rule making could have on broader financial systems around the world, including Canada."

A spokesman for the finance minister said the letters were sent Monday because it was the last day for submitting opinions on the proposed legislation.

Campbell said he was hopeful that given the outcry from around the world, a solution could be found to limit the impact inside the borders of the U.S.

He said even U.S. drafters of the proposed new regulations must have realized the complexity of the issue because they asked "hundreds and hundreds of questions" during the consultation process.

"So I think they realize they had a problem here. Our hope the volume and the seriousness the concerns expressed will impress the U.S. authorities."

If enacted, the new regulations would go into effect in July.