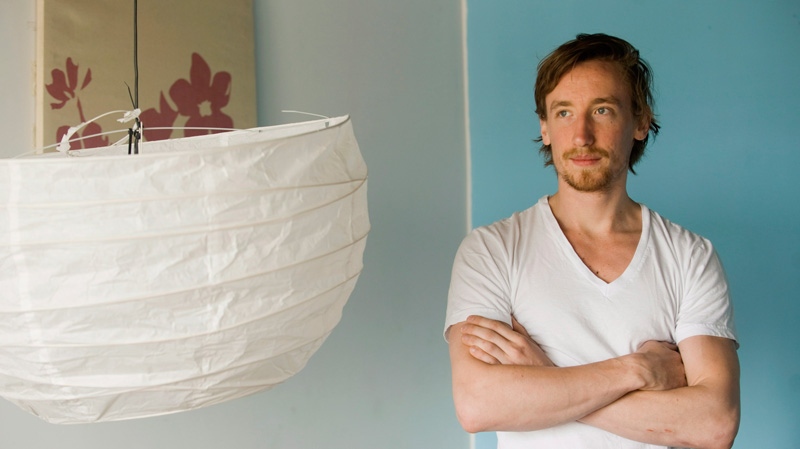 Engineering student Nick Zsofcsin poses for a photograph at his apartment in Montreal Monday, April 30, 2012. (Graham Hughes / THE CANADIAN PRESS)

MONTREAL - They are the 66 per cent. And they have been mostly invisible in the torrent of stories about Quebec's student unrest.

Roughly two-thirds of Quebec students are not on a declared strike from their classrooms, are not necessarily participating in daily marches against tuition hikes, and not getting the attention of the national and international media.

What are they doing? They're completing their semester on time.

At McGill University, classes and exams have been largely unaffected by the student unrest. Only three departments -- Gender, Sexuality and Women's studies; Graduate Art History; and French Literature -- are on strike.

While those strikers are now in scholastic limbo, mechanical engineering student Nick Zsofcsin has just finished his last semester at McGill.

He's now planning to travel to South Africa this summer. Zsofcsin cited several reasons for why he hasn't been participating in the protests -- namely, he was busy with his studies and wanted to graduate.

He joked that different faculties might have different values when it comes to protesting.

"Maybe arts students feel that if they want to have an impact on this world, they have to speak their minds more," he said. "I guess (engineering students), if they feel like they want to affect the world, they just build something really cool," he added with a chuckle.

The tensions between striking and non-striking students were apparent Monday in one scene on a college campus that could have been lifted right out of "West Side Story" -- complete with a turf battle between rival student groups.

In this case it was the "reds" against the "greens."

Nearly 500 students wore red squares -- the symbol of this spring's protest -- and blocked access to CEGEP de Sherbrooke, protesting a legal injunction forcing students back to class. But a group of students in favour of the tuition hike also showed up, wearing green squares and expressing hope that the injunction would be enforced.

One student trying to cross the campus was pushed to the ground by a few protesters. Two of the alleged pushers were immediately arrested by police, prompting protesters to march to the police station.

Zsofcsin said that while he admires the protesters for their perseverance, he personally doesn't agree with the more extreme tactics used in some demonstrations.

"I think the violence is ridiculous," he said.

"Their point of view isn't going to go anywhere without the support of the population, so I don't see why they would do anything to disrupt anyone else's lives, or cause damage to anyone else's property."

Meanwhile, the semester is frozen in uncertainty for the roughly one-third of Quebec students still on strike, as the tuition debate rages with no end in sight after more than two months.

About 176,000 students are still striking. From the streets, they have been watching as some student associations never voted for a boycott; some voted to end their protest; and some were forced back to classrooms after legal injunctions.

There has been some bitterness expressed toward the students sitting in class. They have been called selfish, cast as do-nothing profiteers off other people's protest efforts, and been accused of sacrificing future generations of Quebec students to fulfil their own immediate needs.

One student who won an injunction in Quebec City, a former soldier who served in Afghanistan, was recently heckled as he returned to his classroom. Other students lined the hallway and quacked the sound, "Moi! Moi! Moi! (Me! Me! Me!)" as he walked past.

The Universite de Montreal has the most faculties on strike, with over 15,000 students boycotting classes. Clemence Lavigne is a first-year film studies major who hasn't been to class in two months.

During an interview Monday, she had to talk loudly on her cellphone so she could be heard over the chants from the student demonstration she was attending.

She has no idea what fate awaits her school semester.

"For the moment we don't know what's going to happen," she said. "I may lose my session, but I wouldn't mind, for the cause."

Lavigne said the university is keeping in contact with students, discussing the possibility of extending the semester until the end of June -- that is, if the students go back to class soon. Otherwise, she may be forced to prolong her studies and pay for another semester.

She's not the only one left in the dark.

Even school administrators were scrambling Monday to draw up a variety of contingency scenarios for various unknown outcomes.

Possible scenarios cited by one CEGEP federation were Saturday classes, longer semesters, or abbreviated sessions. It's unclear how smoothly those efforts will go; two teachers' unions expressed concern about what work conditions their members might face.

Jean Beauchesne, chairman of the Federation of CEGEPs, said all the scenarios being planned now are only in their preliminary stages. He said it's pointless to explore these options in depth, because the situation is changing, "from hour to hour."