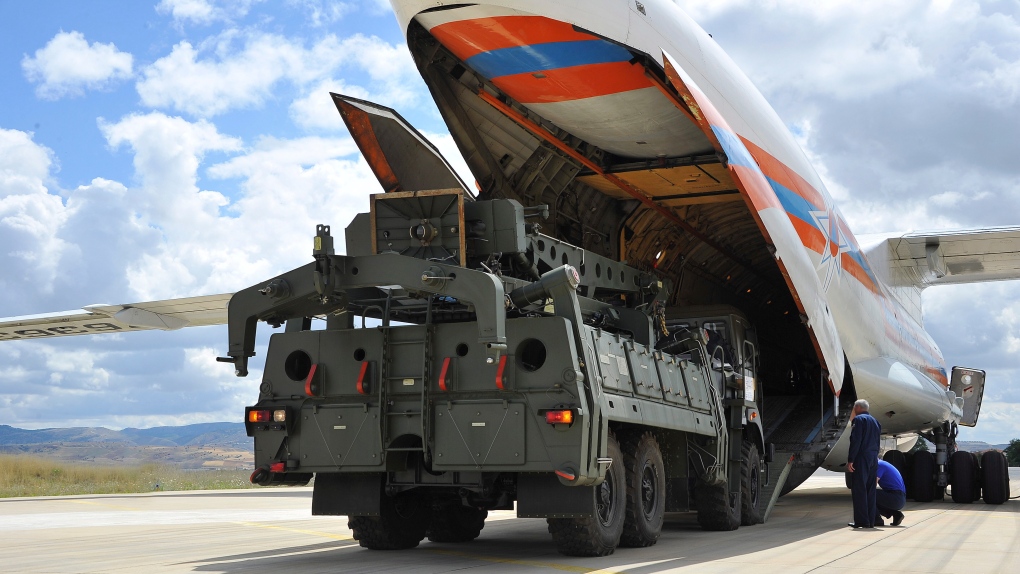 Military vehicles and equipment, parts of the S-400 air defense systems, are unloaded from a Russian transport aircraft, at Murted military airport in Ankara, Turkey, Friday, July 12, 2019. The first shipment of a Russian missile defense system has arrived in Turkey. (Turkish Defence Ministry via AP, Pool)

ISTANBUL -- Turkey on Saturday continued receiving components of a Russian-made air defence system, despite Washington's warnings that it will impose sanctions on the NATO-member country.

Turkey's defence ministry tweeted the landing of a fourth Russian cargo plane in Murted Air Base, near the capital, Ankara. On Friday, the ministry announced the much-awaited delivery of S-400 components had begun.

The United States has repeatedly warned it will impose economic sanctions and kick Turkey out of the F-35 stealth fighter jet program if Ankara does not drop its S-400 purchase. Turkey has refused to bow to U.S. pressure, saying its defence purchase is a matter of national sovereignty.

The U.S. administration was publicly silent Friday on how it would respond to the delivery, with the Pentagon postponing a news conference.

Acting U.S. Secretary of Defence Mark Esper and Turkish Defence Minister Hulusi Akar spoke by phone. While the Pentagon declined to discuss the call, the Turkish ministry released a statement late Friday, saying Akar stressed that the purchase of S-400 defence systems "was not an option but rather a necessity" due to Turkey's security concerns.

The statement said there was no change in Turkey's "strategic orientation," adding that a deterioration in relations would not serve the interests of Turkey, the U.S. or NATO.

The minister also emphasized Turkey's commitment to the F-35 program and repeated a proposal for a joint working group to study how the S-400 system would interact with the fighter jets.

The U.S. is concerned the S-400 could be used to gather data on F-35 capabilities if Turkey has both.