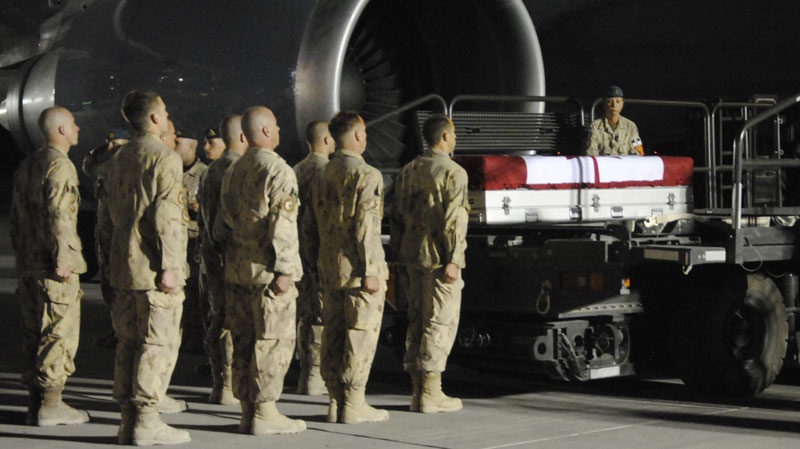 KANDAHAR, Afghanistan - Cpl. Yannick Scherrer's sacrifice was remembered Tuesday during an overnight ramp ceremony at Kandahar Airfield by more than 1,000 of his fellow troops as they bid farewell to the first Canadian soldier to die in Afghanistan this year.

As a lone bagpiper played a lament, Scherrer's flag-draped casket was carried by his comrades and hoisted into the side of a Canadian Forces Airbus plane, where it was headed to Canadian Forces Base Trenton in southern Ontario.

The 24-year-old Montreal native was conducting a security foot patrol with the Afghan National Army when he was killed Sunday by an improvised explosive device near the village of Nakhonay, southwest of Kandahar city.

The member of the 1st Battalion of the Royal 22nd Regiment was on his first tour in the country, like more than half of Canada's battle group stationed in Kandahar.

According to his Facebook page, Scherrer was a couple of weeks away from his scheduled leave, which he was going to spend in Thailand.

"Our thoughts and deepest condolences go out to Cpl. Scherrer's family, and to the soldiers and friends who served alongside him," Brig.-Gen. Dean Milner, Canada's top soldier in Afghanistan, said earlier.

"Canadians can be proud of the progress our soldiers have accomplished for the people of Kandahar province in Afghanistan. More work remains to be done.

"We will honour Yannick's sacrifice by maintaining our resolve and continuing the fight to make Afghanistan a safer and self-sustaining country."

It is unclear whether anyone else was injured in the blast. The Canadian military does not release information on those wounded on the battlefield.

The Department of National Defence says it decided in late 2008 to stop publicizing battlefield injuries in an effort to deny mission intelligence to insurgents. But critics of the policy say by not disclosing such information, the true cost of war is partly hidden.

Scherrer's death was a haunting reminder that while Canada is shifting its focus to launching a training mission this summer, the military is still waging a tough war, particularly in the district of Panjwaii.

Nakhonay, a hardscrabble village of about 1,000 people in eastern Panjwaii, has proven to be an especially tough battleground for Canada's troops in recent months.

Five of the 17 Canadians who have died over the last year have been killed in Nakhonay and scores more have been injured.

He joined his troops in a patrol of the village during Operation Hamaghe Shay, a mission that yielded caches of weapons and IED components on a daily and nightly basis ahead of the summer fighting season.

At the time, Milner offered a sobering assessment of the public mood in the community.

"I think they are sitting on the fence right now and they're waiting to see who is more capable, who is winning," Milner said against the backdrop of a crumbled wall -- the remnants of a recent IED blast.

"They've been intimidated for so long. Right now is that waiting period to understand what the situation is going to be like during fighting season."

Scherrer's death also shattered a period of relative calm for Canadian troops in Kandahar. It is the first Canadian fatality in Afghanistan since Dec. 18, when Cpl. Steve Martin died from an IED during a foot patrol, also in the Panjwaii district.

It comes as Canada prepares to wind down combat operations in Kandahar in July and take on a training role that would focus on security, medical and literacy skills in northern Afghanistan.

The latest death brings to 155 the total number of Canadian military members who have died as part of the Afghan mission since it began in 2002.

Two aid workers, a diplomat and a journalist have also been killed in the war-torn country.